Home Gay LA OVERFLOWING PRIDE- LA Pride Festival was Oversold and Overcrowded, but was it... 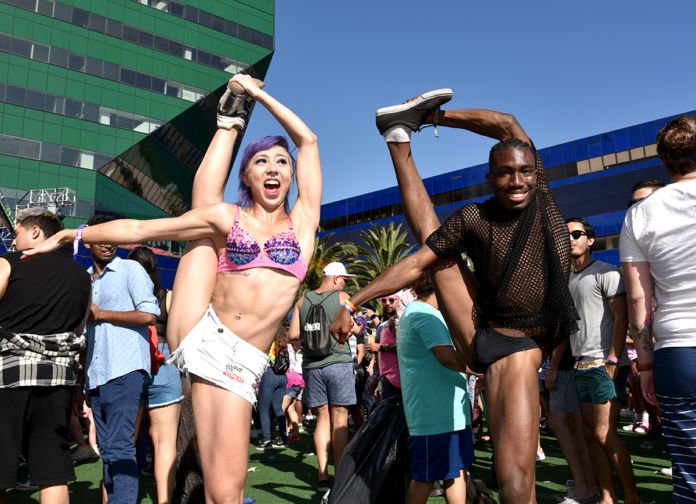 As predicted, the crowds came to the LA Pride festival on Sunday June 10, in record-breaking numbers, very similar to Saturday’s event. And like Saturday’s festival, the venue was oversold, overcrowded and some ticket holders were turned away after waiting for hours in line.

The situation is serious when power gays have no pull at the VIP entrance. The guest list was no exception to Fire Marshal law as a group of people holding VIP and media access lanyards were also blocked off from entering the festival once it had filled to capacity around 8pm that Sunday. Chris Classen, who recently stepped down as president of Christopher Street West (CSW) the non-profit organization that organizes LA Pride, was seen arguing with someone at the gate who was trying to let some VIP people inside after the venue was maxed out. He said no one was getting inside–not media, not VIPs or people on anyone’s list. Eventually only those holding lanyards were allowed inside once Classen left the VIP section. Those VIP tickets sold for $250.00.

Clearly CSW has some explaining to do. People are outraged that more tickets were sold than what the festival could actually hold, like an airline overselling a flight. People are wondering why those privileged with cash have the option to buy their way into VIP status. There is the question of the vast VIP section that took up a lot of room by the swing sets at West Hollywood park. People are calling for the festival to be moved to Downtown Los Angeles where there is more room. And there will be calls for a free event in many West Hollywood City council meetings to come.

“It was sad and frustrating to not be able to go to the festival the entire weekend due to the crowding,” Mike Peterson of Los Angeles told WEHO TIMES. “Between that and the the near 100% commercialization of the parade itself, I was really disappointed. After we saw Wells Fargo, BoA, and Chase floats go by, I was joking with my friends that Citi must be coming up next. I was right. M.A.C. makeup? Some random insurance company? Seriously? How sold-out can LA Pride possibly get? I had the good fortune to attend Auckland Pride and Sydney Gay Mardis Gras earlier this year, and the contrast with LA was amazing. Whoever is running LA Pride should go down under and see how to do it right.”

It’s true that many people left the festival gates heartbroken and frustrated, but there are those who made in inside the festival and had a completely different experience. What was their experience like? Did they think the LA Pride festival was overrated? What did CSW get right?

“I feel guilty saying it, but I had an amazing time at the festival. I don’t want people to get mad at me, but I really did enjoy it a lot,” Los Angeles resident Alberto Reyes told WEHO TIMES, who was at the festival on Sunday. “I didn’t even know Eve was performing and she is one of my favorite rappers. I saw a lot of people waiting by the stage, so I waited around also and I was shocked when it was Eve on stage. That made me really happy. Eve was worth more than 30 dollars.”

Unfortunately, it’s too soon for people to talk about the positives of the LA Pride festival in 2018. That may not happen for a while. Those who made it inside enjoyed a day that was packed with non-stop entertainment. There was an amazing lineup on Sunday that included Natalia Jiminez, Keke Wyatt, Allie X, Eve, and Tove Lo. There were also some huge surprise performances, like when out of nowhere, mega pop star Christina Aguilera showed up for a surprise performance. Gay icon Cece Peniston also performed to everyone’s surprise.

The booths were interactive. The M.A.C. makeup stage was bright and colorful and happy. The sober SIZZLE section offered games, prizes and free popcorn. And there were plenty of local organizations offering photo booths to walk away with some selfie memories–not to mention the different dance sections offering Latino music, hip-hop and of course dance. For many months to come, people will question what happened. The community will voice their thoughts on what went wrong. And there will be plenty of suggestions on what can be done right. Hopefully CSW, under the leadership of new board president Estevan Montemayor, is ready to really listen.