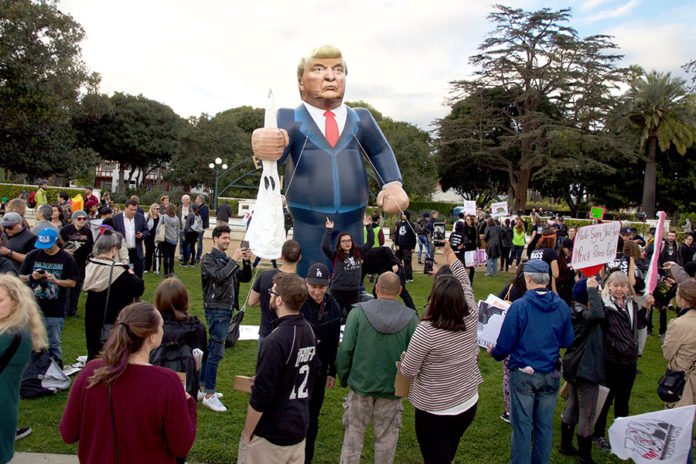 More than 600 people gathered at Beverly Gardens Park to protest Trump during his visit to Los Angeles. He held a fundraiser at the residence of Ed Glazer in Beverly Hills, whose billionaire family owns the Tampa Bay Buccaneers.

The call to protest trump out of L.A. at Beverly Gardens Park had a different feel from previous rallies in Los Angeles. For starters, parking was fairly easy, considering Santa Monica Blvd looks like a war zone due to its heavy construction where Beverly Hills and West Hollywood meet. The usual yells from protesters and the honking cars in support of their protests were drowned out by the live music coming out of a truck where a band played cumbias and other Latin music. You had people holding the usual signage and then you had people dancing where they stood, which gave the protest more of a mini-festival feel than the angry anti-Trump protest that many were hoping for.

The event attracted activists from all over Los Angeles, which included LGBTQ and immigrant rights groups. A stage was also set up for speakers to say some words to the crowd. However, the giant blowup of Trump’s likeness holding a Ku Klux Klan hood was the centerpiece at the protest. People took selfies and then took to social media to share accordingly. “HEY-HEY-HO-HO! THIS COUNTRY IS NOT A TV SHOW! HEY-HEY-HO-HO,” were among some of the chants heard that day.

A few Trump supporters braved the crowd to show up with pro-trump signage, which is also something you don’t really see at an anti-Trump protest in Los Angeles. A man who appeared to be hispanic, wore a Trump flag over his shoulders. He was surrounded by volunteers to keep out of harms way. Protestors screamed at him and tried to shove him. One protestor wearing a pink pussy hat tried to snatch his hat, but aside from that incident, the gathering was peaceful.

Those who could not make the Beverly Park protest, joined hundreds of other protesters at Intercontinental Hotel in Downtown Los Angeles where Trump stayed for the night. Protesters lit the side of the hotel with the words, “Oppose Racism. Oppose Trump.”