Out and About with Mike Pingel – The Golden Girls Kitchen

My friend Bill and I decided to go on the off-hours thinking it would give us more time at the event. The outside of the pop-up showcases the artwork of our beloved Golden Girls. Our seating time was 3:45pm. We checked in and were told we would be seated at our time, and not a minute before. We ordered our tickets separately so we were seated at The Shady Pines Bar (Note: when ordering tickets make them all at the same time to assure a group can sit at a table). 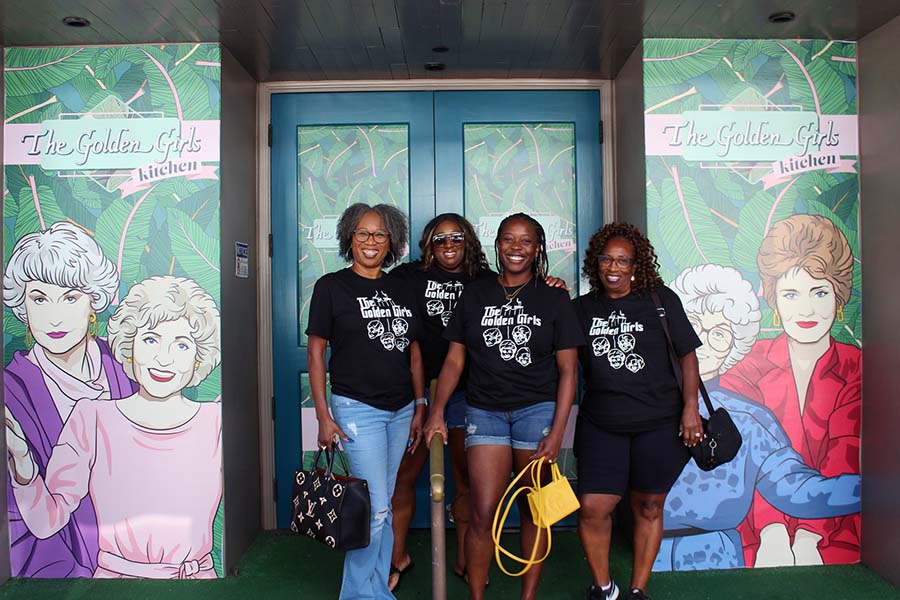 When booking tickets, you also select a main dish, and which cheesecake you want. I chose Sophia’s meat Lasagna Al Forno with garlic bread and a strawberry Cheesecake. Other options include The Lanai (A “Miami Style” Cuban Sandwich); Bacon Lettuce Potato Sandwich (Say It Fast); Vegan Bacon Lettuce Potato Sandwich (Say It Fast) or The Rose Marie Soup and Salad Combo and other cheesecake options were Chocolate or Vegan. The menu was created by Executive Chef Royce Burke.

The price range varies up to $49, which includes the main entrée and a cheesecake. Everything else is à la carte and can be purchased at the kitchen. Everyone is given a 90-min limited visit, which includes your dinner and some time to take pictures.

We settled ourselves at the bar and started taking in the sights. We were greeted by the bartender who confirmed our pre-orders and offered us the menu in case we wanted to order anything else.

The drink list included: “The Golden Girls kitchen Coffee,” “Southern Belle Libation,” “Devereaux’s Delight” or “Lemon Basile Lana Cooler”. The bar area is decorated with a sign, photos and a few tv screens showing clips for The Golden Girls and a big pink neon sign that of says “Thank you for Being a Friend” (Note: The Gold Girls Kitchen only serves alcoholic drinks during the weekend due to their liquor license).

Bill and I decided to check out the photo areas while our food was being prepared. The main dining area is a large sized mural of The Golden Girls. Across the way, we ventured into Blanche’s Boudoir. I jumped on the bed to take some photos of me reading my book “Channel Surfing: Betty White” (yes, I authored a book all-about Betty White, which is for sale on Amazon.com – a shameless plug, I know).

We then moved to the girl’s kitchen, which has that famous yellow phone on the wall. The kitchen is actually one wall. I would have loved to have had a full three-dimensional kitchen setup. I would have loved more photo attractions. It would have been fun to have living room or one of the other ladies’ bedrooms. But my pics turned out cool.

After taking a bunch of photos we worked our way back to the bar and waited for our food. The lasagna was good, and the cheesecake was wonderful. Bill ordered a frozen drink and a side of fries at $8 each. The drink was nonalcoholic, and he felt the price for both was a bit steep for the serving size.

We ate, not realizing our fun had just starting. As we wrapped up our lunch, a camera crew for Access Hollywood arrived to shoot a segment. After they filmed a group at the bar, I mentioned to the producer about my book, and he invited me to be a part of the taping. Of course, I said YES!

There was more fun to be had. Access Hollywood on-air host, Kitt Hoover arrived dressed as Sophia Petrillo and Drag-extraordinaire Gert Crawford came as Dorothy Zbornak. These two brought life to these amazing characters. They walked around the kitchen asking patrons Golden Girls trivia and singing the show’s theme song “Thanks You for Being a Friend”. Everyone had a grand time.

Finally, it was my turn to answer trivia for Access Hollywood. All three of us climbed on Blanche Devereaux’s bed. I had a fantastic time with these two ladies, and guess what, I got my questions RIGHT (of course). I won a Golden Girls lunch box!

So my time at the Golden Girls Kitchen was a memory I will not forget. I feel everyone at the pop-on had a grand time on the day I went, but we did have Sophia and Dorothy in the house. We were the lucky ones.

Being at The Golden Girls Kitchen it was hard not to think of the four actresses Bea Arthur, Betty White, Rue McClanahan, Estelle Getty and their characters Dorothy Zbornak Rose Nylund Blanche Devereaux Estelle, and Sophia Petrillo. I think the ladies would love this pop-up and the joy it brings to all their fans.

Thanks for the memories Golden Girls Kitchen, now please pass the Gerflokennokkin!!!!

To order or for more info, visit: https://bucketlisters.com/event/golden-girls-kitchen.