Out & About with Mike Pingel – Disneyland for Gay Days Anaheim

I started my weekend by going through my stack of red t-shirts to find the perfect one to wear to this year’s Gay Days Anaheim. Red shirts are the color of choice for those who want to hold their Disney gay flag high. I chose a darker red with a Day of the Dead image of Darth Vader, since I was going to experience Disney’s Star Wars: Galaxy’s Edge for the very first time.

What is great about Gay Days is that there is something for everyone. The Gay Days Anaheim built an impressive list of events.

“At Gay Days we work hard to include everyone,” co-founder and producer of Gay Days Anaheim, Eddie Shapiro, told me. “Sure, we have dance parties and a pool party that skews toward younger fit men, but we have events around the clock for all types, and all of our in-park events are for everyone, including straight supporters. This event is about community.”

“I have many sweet stories, but one of my favorites involves an email I got after the event,” he added. “A mom wrote to tell me that her family had saved for months for this trip to Disneyland for her daughter’s birthday. I thought, ‘Oh, boy, here we go.’ She went on to say that they learned it was Gay Days and were not at all happy about it. But her daughter was wearing a birthday button and she was floored by the numbers of Gay Days attendees who engaged with her daughter, wishing her a happy birthday and such. She said it was the friendliest she had ever experienced the park and dispelled all preconceived notions of what Gay Days would be like. They booked to come back the following year.”

Throughout the weekend, the Gay Days Anaheim Welcome Center, located at the Grand California Hotel, is a great place to start the Gay Disney experience. It’s where one can pick up the official Gay Days T-shirt and check out other sponsored booths and find some fun items.

On Friday this year, there was a Singles Game Mixer: YOU DON’T KNOW MY LIFE, an exclusive screening of ABC-TV’s Mixed-ish, a chance to meet author Frank DeCaro of the new book “Drag”, and of course, the yearly kickoff party, Wonderland.

Then Saturday, Disneyland is the main park where everyone hits the happiest playground wearing their red shirts. The day kicks-off with the traditional Big Red Boat ride, then lunch at the Hungry Bear Restaurant, and then in the afternoon, there is the Big Red group shot in front of Cinderella’s castle. The party continued into the evening with the Kingdom dance party at the House of Blues.

Sunday focused on California Adventure, where there were meet-ups all over the park, and the weekend ended with the yearly cocktails at the Grand California.

Someone told me that they felt the red shirt idea was not needed anymore, that people can be gay anywhere these days at places like Coachella and so forth. He pointed out how some gays didn’t bother to wear red that weekend.

I pondered about this statement. I came to the conclusion that yes, the red shirts are a must. We, as a group of LGBTQ+, need to show that we are a community and that we come in all shapes, color and sizes. I personally love the red shirts. I feel more open to going up and chatting with someone I don’t know, and it creates community. I enjoyed the park like I always do, sharing the day with my friends and running to rides, grabbing food and meeting fellow red shirts.

One of the wonderful stories I encountered while snapping pictures that weekend was when I was in line at STAR TOURS. There were two handsome guys wearing their red apparel. They told me they had just met that day within their group of friends and I could tell that there was Disney love fireworks going off between them both. How wonderful for them that they might be at the beginning of a lifelong relationships. It made me wonder if my red shirt man was somewhere close.

Next stop for me was Star Wars: Galaxy’s Edge. Yes, I’m a diehard Star Wars fan and I’ve been waiting to explore this new attraction for months. Honesty, it did not let me down. My friends and I snapped shots at the life size Millennium Falcon and then got in line for single riders. I could not wait 50 minutes to fly the Falcon! We got right on, and Tinker Belle must have been watching over us, as all three of us got to go on together and I got to be the pilot. My friend Bill screamed, “PULL THE LEVER!” And I did. And I made the jump into hyperspace…a true dream come true.

After that adventure, everything else was icing on my Star Wars cake. Next stop was The Big Red Boat ride. I was on the yearly voyage of red shirts on the Mark Twain Riverboat in Frontierland. From there, we were off to take pictures of characters at the main entrance to Disneyland and California Adventure. Then we all rode Hyper Space Mountain (formerly Space Mountain), It’s a Small World; Haunted Mansion Holiday; Indiana Jones Adventure, and ate lunch at Red Rose Tavern.

Then off to Cinderella’s Castle for the big photo shoot with everyone in red shirts. I think this photo speaks for itself regarding how many people attended this great event. 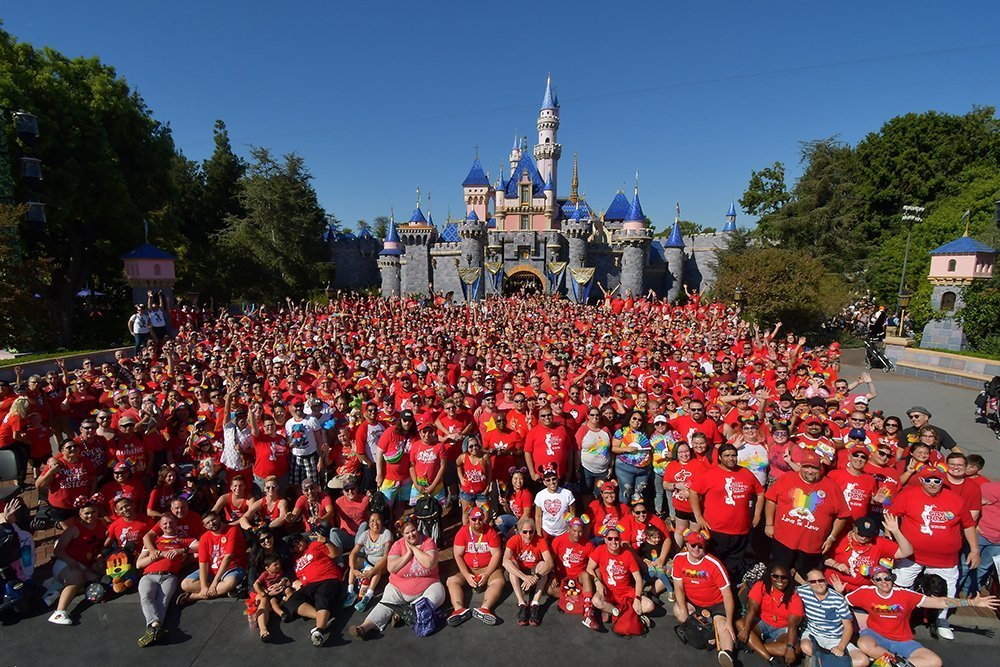 After the photo shoot, I asked Shapiro about the “official” or “unofficial” status of Gay Days at Disneyland.

“That word ‘official’ gets tossed around a lot and it is confusing,” he said. “What does it actually mean? Who certifies these things? God? The notion that Gay Days is ‘unofficial’ was something that we ourselves started doing in the early years to indicate that the event is not put on by Disney and therefore you won’t find Gay Days information on their site. But it is not as if the event is unacknowledged by Disney. Quite the contrary: Disney Vacation Club, ABC, Adventures By Disney and D23 are all cash sponsors, and Disney, as you know, puts out a whole line of merchandise and food and beverage offerings just for Gay Days weekend.”

I asked Shapiro how he felt about creating such a wonderful event.

“It’s hard to let it sink in,” he said. “I am so busy all weekend long, just making it work, I don’t really take a lot of time to reflect. But a lot of people approach me to thank me for bringing them joy and for putting it all together year after year. And when I am looking someone in the eye and they are expressing gratitude, it’s impossible not to feel like what we do matters.”

And what was Shapiro’s highlight for this year’s Gay Days Anaheim?

“The highlight this year was probably the Friday night Wonderland party,” he added. “We did it at the Anaheim Majestic Garden Hotel and got to have our Alice in Wonderland themed party in an actual rose garden. It was beautiful and A’Keria C. Davenport slayed!”

Sad to report, my red shirt did not score any romance sparks for me at Disneyland. But I had a terrific time. This one of my most fabulous places on earth! Hats off to Disneyland for welcoming Gay Days Anaheim. 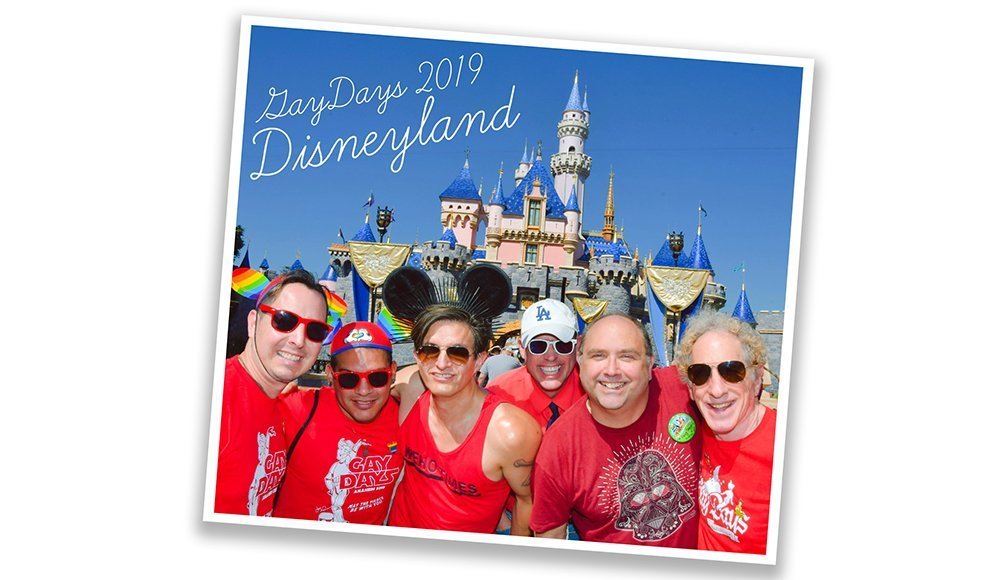 What was my highlight of the weekend, other than the Mickey Mouse Pretzel? Going into hyperspace with my friends – it does not get better than that!!!

So, are you ready to make your plans for next year’s Gay Days Anaheim? It will be held on Oct 2-4, 2020. Sign up for their mailing list at https://www.gaydaysanaheiminfo.com/ and be the first to know about the upcoming deals on tickets, hotel rooms, events & VIP adventures!

See you next year with your red shirt and rainbow Mickey ears!