Out & About with Mike Pingel at Everyone’s Favorite “WeHo Bistro” 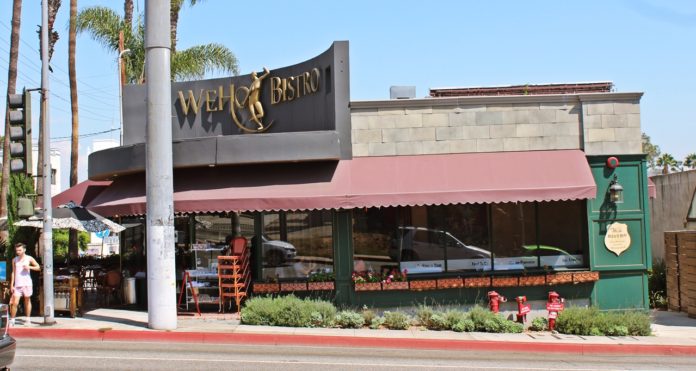 I must have walked by the WeHo Bistro located on the corner of La Cienega Boulevard and Holloway Drive for well over a 100 times before one day I finally decided to give it a try. I quickly learned that there is a lot to love about this casual French dining bistro in the heart of West Hollywood.

The restaurant recently celebrated a milestone of serving 222,222 guest this past month. The ambiance is lovely with both indoor and outdoor seating. At night, it even sparkles with small overhead lights and the staff is super friendly and accommodating

Anyone who knows me, knows I love 70s retro, and there is plenty of West Hollywood history from that era where Weho Bistro sits today. It’s where the hit show “Charlie’s Angels” filmed the episode “Angels on Skates.” Cheryl Ladd filmed one of her scenes on that exact corner.

In the 70s, CVS was the home of Flipper’s Roller Boogie Palace, the hottest roller disco around. The skate kingdom was the filming spot for other films/TV shows like “Skate Town USA”, “CHIPs”, and it is also where a few celebrities could be seen roller skating, such as Olivia Newton-John, Cher, Jane Fonda, John Voight, Belinda Carlisle. The Go-Go’s, Prince, The Ramones, and Berlin even performed live at the club. It was the IN place for everyone in skates. Flipper’s closed in 1981.

Now a little bit of history of how Weho Bistro Restaurant came to be:

“Five years ago, Jerry and I were looking to do something to meet more people,” Jeff Douek, the owner of Weho Bistro told me (Jerry Teigen was Douek’s husband, who passed away this past January). “We were working from home all the time, we didn’t know what we were looking for, but we were looking for something to buy because we did not want to start from scratch. I had given my husband a target date to find something, which was before his knee replacement surgery. We couldn’t find anything but the night before is surgery, we came here [Salades de Provence] for dinner. We liked the food. I thought why don’t we buy this place and we could turn it around. So, I talked to the owner that night to see if he wanted to sell the place. He said he was actually looking for a buyer. He gave me his price, it was probably too much but less than my budget. So, we decided to buy it that night, mostly because of the Mushroom Soup and the Bread Pudding. Those were the two items I had and I thought ‘wow.’”

The Salades de Provence original menu was kept at WEHO Bistro, but there were a few holes in the menu. Head chef, Daniel Barajas added new items to have a fuller service menu, which included the expansion of their breakfast selection. Douek did keep what is now the restaurants’ signature items: The Mushroom Soup and the Homemade Bread Pudding.

The restaurant has built a solid customer base in West Hollywood over the years, “Our business is 70% repeat people. 20% hotel people.” Douek said. “Once they come here, they become a customer for life.”

According to Douek, there was a customer who drove 2 miles to tell them that their Ice Tea is the best she ever had.

“We do make magical food” Douek continued. “We cook everyday food with a French flair, so I call it Everyday French. Usually, when you think of French you think of complicated, delicious and expensive. We’re not cheap, but not as expensive as going to a French restaurant. We want to be an everyday place. We have people to come here every single day, sometimes two-three times a day.”

Talking to Douek, it becomes obvious that he is a very proud owner of Weho Bistro. He speak of his Bistro with passion and love.

“The self-satisfaction we all get from the gratitude from our customers–I did not realize how good that feels as an owner to receive gratitude, so many smiles coming in and going out from our guests,” he said.

Here are some highlights from Weho Bistro: The food is out of this world. Douek honored me with his choices and assortment of the best items from their menu.

Each table is served a warm Baguette Board with butter and jam and their thirst-quenching, cucumber-mint water. Those who love brunch, they offer a bottomless mimosa special during their brunch hours for $25 per person.

In their starter menu, they are best known for their cream of Mushroom Soup. The soup is super creamy and filled with the freshest blended mushrooms available. This bowl brings people back time and time again. I can understand why it’s the signature dish at Weho Bistro.

I also tried the French Onion Soup which was also fantastic, with a rich onion base, homemade croutons and perfectly melted on the top. Simply delicious.