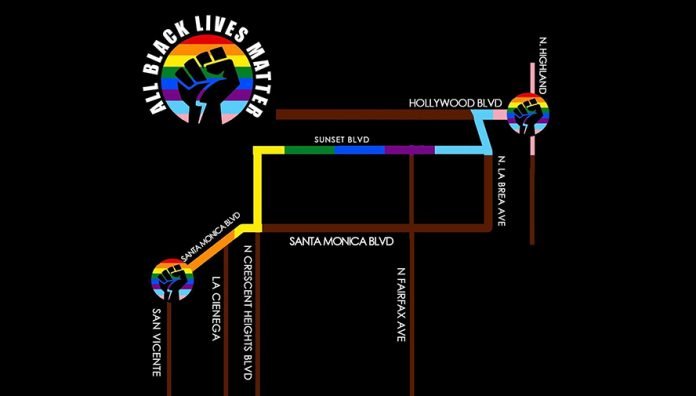 Organizers of the upcoming All Black Lives Matter March on June 14, in Los Angeles, revealed the march route and announced a new start time on the event website. The March time has been moved to start at 11am in honor of trans man Tony McDade, who was shot and killed by police officers at 11am on May 27, 2020.

Mcdade was a 38-year-old African-America transgender man who was fatally shot by an officer of the Tallahassee Police Department in Leon County Florida. According to reports McDade was a suspect in the fatal stabbing of Malik Jackson on nearby Saxon Street.

A statement in the All Black Lives Matter Los Angeles website states:

“In honor of our beloved trans man Tony Mcdade, and the time he was murdered by the police, we have changed our march time to 11am on Hollywood and Highland and ending on San Vicente and Santa Monica. 🌈✊🏿 #AllBlackLivesMatter”

The march route will be the same as the LA Pride sponsored Resist March, which took the place of a Pride parade in 2017. The upcoming march will start at Hollywood Boulevard and Highland Avenue and end in West Hollywood at the Rainbow Crosswalk at the intersections of Santa Monica Boulevard and San Vicente Boulevard.

It has not yet been announced whether there will be speakers at the beginning or the end of the march, or if this will be a protest march similar to the demonstrations this past week where the message is more unified.

Christopher Street West, the organization that produces L.A. Pride, will not be involved in the All Black Lives Matter March. CSW pulled from the march after L.A. Pride organizers were criticized for seeking a police permit to hold the event and for not collaborating with Black Lives Matter leadership before announcing it.

The All Black Lives Matter march is being organized by the newly formed Black Advisory Board made up of Black LGBTQ+ leaders and organizations. On the event’s website, the board posted a statement announcing a protest “in direct response to racial injustice, systemic racism, and all forms of oppression.”

The march was first scheduled to start at 10 a.m., before the newly announced start time at 11 a.m., on Sunday, June 14.

Participants must adhere to California Department of Public Health recommendations for coronavirus prevention, including wearing face coverings and social distancing.

More event details are expected to be announced in the coming days on the All Black Lives Matter event website.