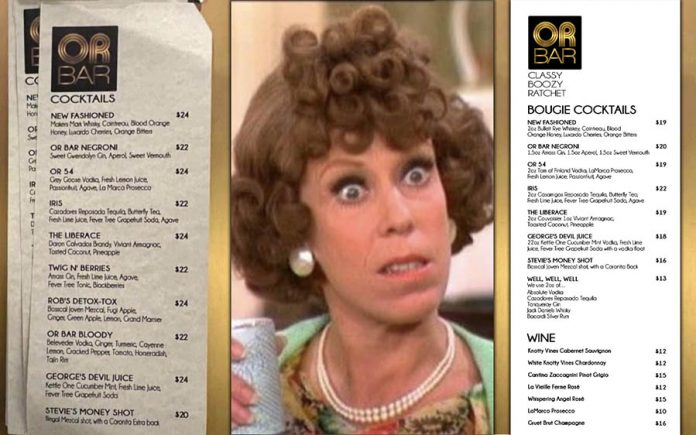 Shortly after OR Bar WeHo opened last week on December 15th, the upscale bar faced a community backlash after photos surfaced of their drinks menu showing cocktail prices ranging from $20 to $24, making it the highest in WeHo’s history–even higher than the Abbey Food & Bar, which is known for its overpriced drinks at $19.

The response to the OR Bar drink menu was quick and cutting from the nightlife community, especially former Gold Coast patrons who took to their social media to express complete outrage over the $20+ drinks.

“No thanks! NYC isn’t even this much. Miss Gold Coast!” Said @kyecoffman.

“I give them 6 months unless they make it a straight bar. No one is going that far down the strip to pay those prices,” said @gaypartypage.

“Geez, these are even more expensive than the drinks I recently had at the Sunset Tower Bar! Pretty outrageous that $20+ cocktails could be becoming the norm in Weho 😐,” said mikitapiowalsh.

And the list of comments (148 in total as of the posting of this piece) went on and on saying it was a hard pass, the place is never going to survive and many expressed how much they miss the former Gold Coast Bar.

Mother Lode Bar also got in on the shade by recently dropping the following post: 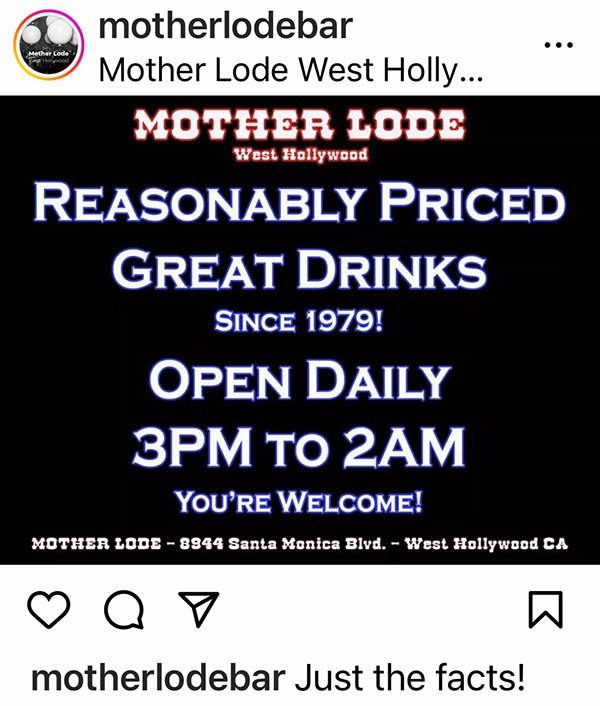 However some commenters didn’t seem to mind the high price:

“I support it!” said @ssspringer. “Tired of the subpar cheap ass drinks in weho. You get what you pay for! I just hope they have good ice and nice glassware at these prices. Then I’m happy to pay.”

“Love it. Perfect date bar, no videos or television – people speak to one another. Crafted cocktails. And a staff that listens and that is working to set this bar apart,” said @dean.bright3

“Those prices are for their signature drinks. Everything else is the same as anywhere else really,” said @rockindafro. “I don’t know why people think this new business is expected to keep their prices the same as the last business. It’s a new thing and rents are crazy. The place is beautiful, the clientele is great… I was happy to be there drinking my reasonable $9 beers.”

Regardless of the mixed reviews, OR Bar made some adjustments.

“We are here for the community,” wrote Stephanie Raye Schestag, on the bar’s official Facebook page. “You spoke and we listened. Check out our updated menu, pricing and happy hour! ❤️”

Prices were cut by $3 – $5 dollars off of their well drinks. Snacks that were $9 are now $8 and there is a current Happy Hour running from 6pm-8pm through Christmas Eve.

OR Bar wouldn’t be the first business to move into the WeHo Community with high expectations for a high paying customer. Coco Queen tried to sell chicken breasts for $30.00 a plate and eventually changed the menu to more affordable prices after a huge loss in revenue. Some believe the French rotisserie chicken never survived the initial backlash which resulted in their demise in less than a year.

OR Bar has been open for less than a week. Maybe the community will forgive and forget and give some of that cocaine chic another whirl.

Who in the world would consider Absolute Vodka Bougie? Seriously, don’t piss in my face and tell me it’s raining.

They should add appetizers. Are pigs in a blanket French???

I would go, just based on having a picture of Eunice on their menu. Remember, they aren’t holding a gun and forcing people to buy their drinks. Dumb people, who can’t afford it, do it voluntarily. This is a free country, at least for now.

One thing I won’t stand for is being taken advantage of. And this is a prime example of being taken for a ride. “Let’s see how much we can get out of them.” Did no one do market research before preparing the menu? Not good.

People need to relax. They’ve been officially open for all of six (6) days. Give them a break. They came with ideas and the ideas aren’t working, so they are changing.

If it keeps people with no class from coming, I might be willing to pay those prices.