Optique by Cynthia & Christine​, a high end optical boutique in West Hollywood specializing in designer sunglasses and prescription eyeglasses was vandalized and broken into this morning at around 4:55 a.m..

An employee who works at My 12 Step Step Store located next door discovered their neighbor’s store front glass door had been shattered and he assessed that expensive eyewear was stolen from the shelves.

“I don’t know what happened,” said Fernando Rojo. “I saw that one of the glass doors was completely broken. There is glass all over the floor. I looked inside and I could tell that they were robbed. I called one of the owners, Cynthia. She didn’t believe me at first so I sent her some photos. This is really sad. I know them well and they’re really nice.”

West Hollywood Sheriffs arrived on the scene at around 10am to assess the damage and get a report on what was stolen.

According to a source, the alarm was triggered at 4:55 a.m.. Camera’s captured the store being robbed and then being being robbed again at 9:20 a.m.. Video footage captured another individual walking into the store and grabbing some sunglasses for himself.

No details yet on how much inventory was taken.

Established in 2011 Optique by Cynthia & Christine is owned by two sisters. They have over 35 years of experience in their field, offering a wide selection of eyewear to the community.

Optique was previously located down the street at 8947 Santa Monica Boulevard, by the Robertson Boulevard intersection. According to their Yelp page, it operated at the location for over 24 years before the sisters took over. They then relocated to 2019 to 8730-B Santa Monica Blvd on the corner of Huntley in West Hollywood in 2019.

My 12 Step Store was located at that location for 15 years before it moved next door in 2019.

Anyone with information leading to the arrest of those who broke into the eyeglass boutique is encouraged to provide their information anonymously by calling “Crime Stoppers”. Leave a tip by dialing (800) 222-TIPS (8477), use your smartphone by downloading the “P3 Tips” Mobile APP on Google play or the Apple App Store or by using the website http://lacrimestoppers.org.

If caught, they should be prosecuted to the fullest extent of the law. (Do we still do that?!).

This is a photo of the two that broke in at 4:55 am.
Thank you to our friend and neighbor Fernando for calling me and letting us know…. also Thank you to WEHO times for this article about this very upsetting and unfortunate event. 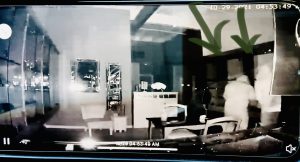 This is a photo of a person who entered our store after it was already broken into, photo was taken at 9:29 am 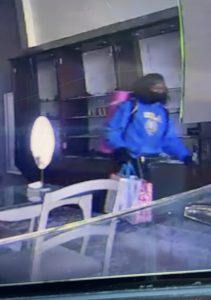 It happened before 5 am & sheriffs did not arrive until 10 am? They are just down the street, it was sunny & lots of traffic & people walking by…..

The simple fact is that the slugs were long gone and there was no immediate threat of violence.

How is it even possible that there could be that much destruction without anyone noticing (seeing nor hearing that much glass breakage) whilst it was taking place??? Hard to fathom.

like its totally sad to see another business in weho get vandalized.

The people in this world can be so disgusting at times.

ABOUT US
WeHo Times West Hollywood Daily News, Nightlife and Events. The WeHo Times is an online news source covering the life and times of the City of West Hollywood. Featuring unbiased professional reporting and photo journalism, WEHO TIMES is updated daily, delivering the latest city news. The online publication founded in 2017, also features cultural events, people, politics, places, nightlife, and the history that make the City of West Hollywood the unique, creative city we all know and love.
Contact us: editor@wehotimes.com
FOLLOW US
© 2022 Murillo Media, LLC
wpDiscuz
8
0
Would love your thoughts, please comment.x
()
x
| Reply