One Killed, Four Injured Outside Home of Fashion Nova CEO 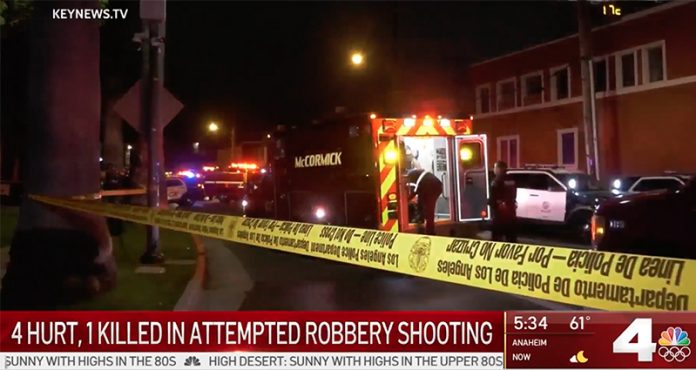 An armed robbery attempt lead to a shootout early Friday morning outside a multi-million dollar Hollywood Hills home owned by CEO of online fashion store Fashion Nova. The incident left one person dead and four injured. According to reports, the suspects were caught at the Beverly Hills/West Hollywood Gateway on Santa Monica Boulevard and Doheny Drive.

NBC Los Angeles reports that the shooting happened sometime around 2 a.m. outside a home in the 1400 block of Blue Jay Way during an attempted robbery. Two men outside the residence were assaulted by two men in ski masks, who forced the victims to the ground, police said.

A security guard at a nearby residence exchanged gunfire with the robbers. The security guard was struck by gunfire in the stomach and hospitalized in critical condition. Both robbery victims and their assailants were also shot, according to reports.

Property records produced by NBC Los Angeles show the home outside of which the robbery and shooting occurred is owned by Richard Saghian, founder and CEO of online clothing store Fashion Nova. It was not immediately clear whether he was home at the time.

It is also not clear at this time of the security guard was working at the home, but according to investigators, high-end property was taken in the robbery. There are no details about the items that were taken at this time.

Police were informed the suspects were in a silver or light-colored Audi. A search for the vehicle by LAPD, found the car in Beverly Hills where it was pulled over near Santa Monica Boulevard and Doheny Drive on the Beverly Hills and West Hollywood Gateway.

According to reports, three people were inside the car. Two of them were bleeding from gunshot wounds. One individual identified as a person involved in the robbery attempt had died on the scene. The other person was taken to a hospital. He condition is not yet known. The third individual was not hurt.

The Santa Monica Boulevard and Doheny Drive intersection was shut down for the investigation this morning.