One City One Pride LGBTQ Arts Festival Starts May 22nd 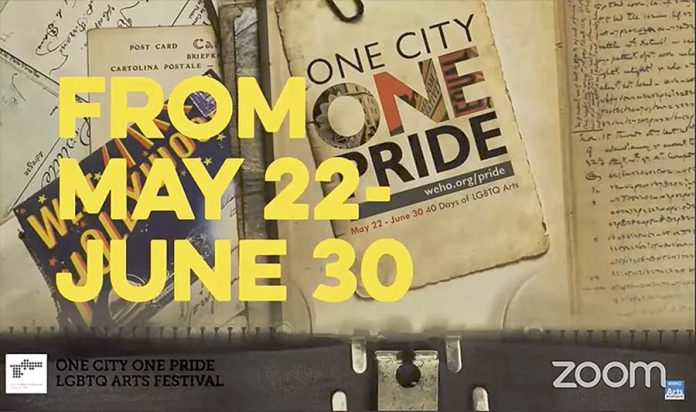 West Hollywood’s One City One Pride LGBTQ Arts Festival is all virtual this year. The city will celebrate the artistic contributions of the LGBTQ community with 40 days of online programming. It all kicks off with Harvey Milk Day on Saturday, May 22, 2021, and ends Wednesday, June 30, 2021, which marks the end of Pride month.

Due to the coronavirus crisis, all festival events have moved to an online virtual platform to respond to the City of West Hollywood’s efforts to prioritize health and public safety. A select few programs can also be experienced as self-guided solo walking tours or outdoor exhibitions. A complete list of this year’s One City One Pride festival events is available at www.weho.org/pride. View a brief promotional video for One City One Pride LGBTQ Arts Festival here: http://bit.ly/2021OCOP.

The 2021 theme for One City One Pride is For the Record LGBTQ stories of the past that have often been hidden or undocumented. One must read between the lines to find stories hidden behind “beard” marriages, coded language, and erased or destroyed evidence. This year, One City One Pride looks at some of these previously hidden stories.

This year’s festival poster was designed by Joan Cox through an open call poster competition which received submissions from around the world. Within the artwork are images from the diaries of Anne Lister.

Anne lived in the early 1800s and during her life, she wrote a five-million-word diary. Around one-sixth of the diary is encrypted in a code she had devised, combining the Greek alphabet, zodiac, punctuation, and mathematical symbols, and it describes in great detail her lesbian identity and affairs. The code used in her diaries was deciphered by the last inhabitant of Shibden Hall. When the content of the secret passages was revealed, he was advised to burn all the diaries, but did not take this advice, and instead continued to hide Anne Lister’s diaries behind a panel at Shibden Hall.

In 2011, Lister’s diaries were added to the register of the UNESCO Memory of the World Programme which notes that the “comprehensive and painfully honest account of lesbian life and reflections on her nature… have made these diaries unique.” Most recently, Lister’s life was featured in the popular BBC-HBO television drama series Gentleman Jack.

The 2021 One City One Pride LGBTQ Arts Festival kicks off at 4 p.m. on Harvey Milk Day, Saturday, May 22, 2021 with a special online performance of Patricia Loughrey’s play Dear Harvey: Stories of Harvey Milk. Extensively researched and beautifully constructed, this documentary-style ensemble play recounts the life and lasting impact of groundbreaking LGBTQ activist and politician Harvey Milk, as told by the people who knew him best … the real-world figures whose lives were forever altered by Milk’s too-short career. This spirited play reaffirms his impact and the continued relevance of his campaign towards equality, three decades after his assassination. The cast includes Calpernia Addams, Mario Burrell, June Carryl, Reggie Lee, David Tran, Robin Tyler, and Brittney S. Wheeler. This performance will be available to watch for the duration of One City One Pride through June 30, 2021. A link to watch online will be sent to people who RSVP in advance at www.weho.org/pride. There will be a special welcome from Stuart Milk, the nephew of Harvey Milk, as well as from the City of West Hollywood Mayor and members of the City Council of the City West Hollywood.

More detailed information about the City of West Hollywood’s One City One Pride LGBTQ Arts Festival events is available at www.weho.org/pride.

Additional events of the 40-day festival include:

The City of West Hollywood’s Human Rights Speaker Series and One City One Pride LBGTQ Arts Festival present Breaking Fast: Exploring the Intersection of Faith and Sexual Identity, an open panel discussion of the feature film, Breaking Fast, and its themes related to navigating the difficult conversations and real-life impacts of faith, sexual identity, and community.