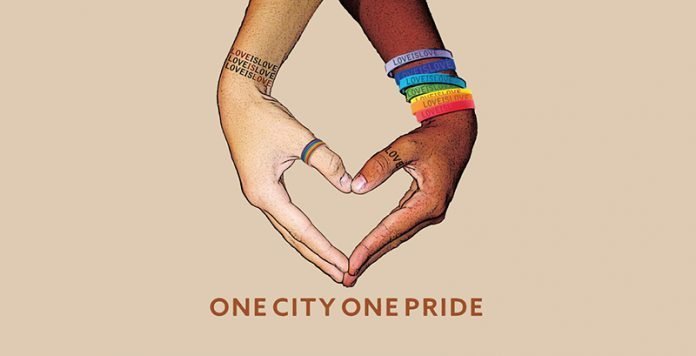 LA Pride weekend is behind us, but the pride celebration continues in the City of West Hollywood during Pride Month. One City One Pride LGBTQ Arts Festival celebrates the artistic contributions of the LGBTQ community with its vibrant programing. The festival runs for 40 days, from Harvey Milk Day on Wednesday, May 22, 2019 through Sunday, June 30, 2019, which marks the end of Pride month. A complete list of this year’s One City One Pride Festival events is available at www.weho.org/pride.

With the theme of “Love is Love,” this year’s One City One Pride Festival celebrates the universal bond created by love.

The 2019 One City One Pride Festival still has multiple upcoming events scheduled throughout #PrideMonth, including:

1) High tea and hilarity begin at 3 p.m. on Saturday, June 15, 2019 at the City’s Council Chambers/Public Meeting Room, located at 625 N. San Vicente Boulevard when the City of West Hollywood’s Lesbian Speakers Series event, Tea Time with Stephanie Miller and Beth Lapides. Come prepared for an afternoon of hijinks as the tea is spilled on the state of politics, current events, and pop culture with nationally renowned progressive radio talk show host Stephanie Miller in conversation with UnCabaret’s High Priestess of Alternative Comedy Beth Lapides. High tea with drinks & dessert will follow the conversation. This event is free but is expected to reach capacity; RSVP is encouraged at https://stephanieandbeth.eventbrite.com. Free parking is available in the adjacent five-story structure with validation at the event.

3) Closing out the One City One Pride LGBTQ Arts Festival on Sunday, June 30, 2019 is the full-day One City One Pride Day of Art event from 1:30 p.m. to 9 p.m. at the City’s Council Chambers/Public Meeting Room, located at 625 N. San Vicente Boulevard. The day kicks off at 1:30 p.m. with the Let Love Flourish and #Pride Poets / Everyone Deserves (A) Love (Poem) Queer Poetry Pop-Ups, followed at 2:30 p.m. with the launch of Crush: First Love, New Talent an LGBTQ comic anthology about first (queer) love from Prism Comics presented as part of the City’s WeHo Reads program. There will be readings from the book and a book-signing. At 3 p.m., QueerWise, a writing collective and spoken word performance group led by Michael Kearns, performs. At 4 p.m., the Pride Poets will have a reading of highlighted poems written for people over the course of One City One Pride. At 5 p.m., see powerful images from award-winning photographer Robin Hammond’s project documenting images and stories from people in 70 countries where being LGBTQ is still illegal at the Where Love Is Illegal panel discussion. Hear trans leader Rikki Nathanson’s stories of courage and activism in Zimbabwe, and learn about OutRight Action International’s work for human rights and LGBTQ freedom, safety, equality and dignity everywhere. The day of programming concludes at 7 p.m. with the first public screening of Dan Guerrero’s touching, provocative, and hilarious new film, ¡Gaytino! Made in America. From mariachi to Merman, Sondheim to Cesar Chavez, decades of Mexican-American/Chicano and LGBTQ history intersect from a personal perspective in story and song in this film of Guerrero’s critically-acclaimed solo play. Admission to Day of Art is free, but seating is first-come, first-served. RSVP is requested at https://ocop-day-of-art.eventbrite.com

The final queer poetry pop ups during the One City One Pride Festival will take place during the June 30 Day of Art event. Throughout the One City One Pride LGBTQ Arts Festival, the City of West Hollywood transformed into a literary salon of love, with a series of two different pop ups. A diverse group of queer poets on typewriters helped event attendees convert their unique love stories into typewritten poetry at #PridePoets / Everyone Deserves (A) Love (Poem). Anyone may commission and take home a love poem from this interactive art project organized by Brian Sonia-Wallace (aka RENT Poet). This project is a testament to the idea that love is love, and every love story is worth a poem. Let Love Flourish: Queer Poetry Pop-up is a spoken word celebration of historic LGTBQ poets created by performance artist Jason Jenn who brings their passionate words to spirited life for the public to enjoy in the streets of West Hollywood. Queer love has emerged in writing in various ways, from veiled allusions during oppressive eras to all-out profusions of sensuous splendor in contemporary times. Jenn employs elaborately styled costumes and various theatrical techniques, while illuminating audiences about the authors’ lives and their historical conditions. Art direction for Let Love Flourish is by Vojislav Radovanovic.

Simply being a member of the LGBTQ community is illegal in 70 countries and the queer community faces discrimination, persecution, and violence around the world. Award-winning photographer Robin Hammond’s Where Love is Illegal project has documented the stories and images of many individuals from these countries. He has dedicated his career to documenting human rights and development issues through long-term photographic projects and has won numerous awards for his work, including four Amnesty International Awards and several other prestigious prizes. The photo exhibit will be on view at the West Hollywood Library, located at 625 N. San Vicente Boulevard, through October 11, 2019 during regular library hours (Monday –Thursday, 11 a.m. to 7 p.m.; Friday-Saturday 10 a.m. to 6 p.m.; and, Sunday, 12 p.m. to 4 p.m.).

The One City One Pride LGBTQ Arts Festival is organized by the City of West Hollywood’s Arts Division with the participation of the City’s Lesbian and Gay Advisory Board, Transgender Advisory Board, Arts and Cultural Affairs Commission, and community partners.

For additional details about the One City One Pride LGBTQ Arts Festival, including a full calendar of events and downloadable brochure with times and locations, please visit www.weho.org/pride.

For more information on One City One Pride LGBTQ Arts Festival, contact Mike Che, the City of West Hollywood’s Arts Coordinator, at (323) 848-6377 or at mche@weho.org.