One City One Pride Kicks off with ‘Dear Harvey’ Reading 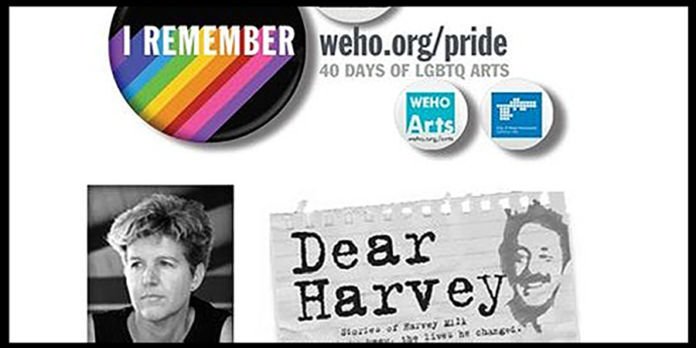 One City One Pride officially kicks-off this year with a Celebration Theatre reading of “Dear Harvey” at West Hollywood City Council Chambers, located at 625 N. San Vicente Boulevard, on Tuesday, May 22 from 7pm to 9pm.

Join the City of West Hollywood’s One City One Pride festival and WeHo Reads program for a free staged reading of Patricia Loughrey’s Dear Harvey, organized and produced by Celebration Theatre, the world’s oldest LGBTQ theatre. This event is the beginning of several events to come through One City One Pride. There will be a reception as part of this event.

Dear Harvey by Patricia Loughrey, is an extensively researched and beautifully constructed, documentary-style ensemble play that recounts the life and lasting impact of groundbreaking LGBT activist and politician Harvey Milk, as told by the people who knew him best. Spoken word combines with multimedia and music as an ensemble cast moves in and out of the identities of real-world figures whose lives were forever altered by Milk’s too-short career. This spirited play reaffirms his impact and the continued relevance of his campaign towards equality, three decades after his assassination.

Celebration is an award winning theatre company dedicate to telling the stories of the LGBT community. The theater was founded in 1982 by gay rights pioneer, Charles Rowland, one of the original founders of the Mattachine Society. The theatre started out in a storefront in Silverlake, Los Angeles, CA before moving to Hollywood where it lived for 21 years before leaving that space in the summer of 2013.

The City of West Hollywood’s One City One Pride LGBTQ Arts Festival takes place from May 22-June 30. For more info and to see a full list of events visit weho.org/pride or follow via social media @WeHoArts.