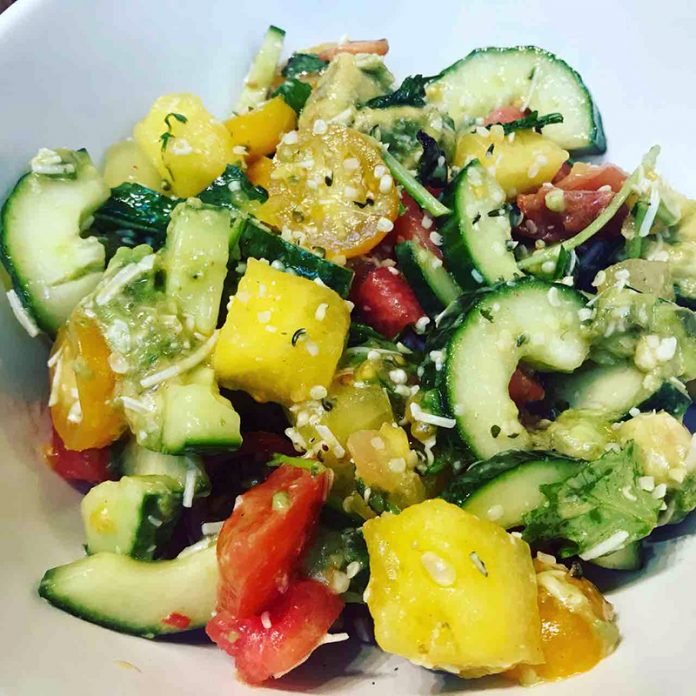 Tocaya Organica, the healthy fresh-casual restaurant with 14 locations throughout Arizona and Southern California, has launched new seasonally inspired dishes. The Tocaya Organica in West Hollywood is located on the Sunset Plaza, at 8720 W. Sunset Boulevard.

Vegan, paleo, keto and gluten-free diners all have a selection of items to choose from. Tocaya Organica’s menu is rooted in traditional Mexican recipes and includes tacos, burritos, salads and bowls. Each dish starts vegan with recommendations for added dairy and protein items.

New dishes include a watermelon and heirloom salad with baby kale and herb salad greens, hemp seeds, heirloom tomatoes, watermelon and a lemon vinaigrette; Zuma tacos with watermelon citrus slaw and vegan chipotle crema; tomatillo shrimp with garlic and tomatillo sauce which can be added to bowls, salads, burritos and tacos and seasonal agua frescas.

In line with the foundation’s debut, Tocaya Organica introduces its “Wave Tank” initiative in October as part of its ongoing mission to align with nonprofit organizations who share a commitment to the environment and bettering our planet. Similar to the concept of “Shark Tank,” Tocaya Life Foundation’s initiative will invite three nonprofits each quarter to pitch a panel comprised of the company’s executives—including President Mikey Tanha, CEO and Co-Founder Tosh Berman, Chief Operating Officer Rudy Sugueti,  Foundation Manager Jordan Yorn, and Chief Marketing Officer Matt Smith—on why Tocaya Organica should partner with their company. The first-place winner of Wave Tank will be named as the restaurant’s official partner for the upcoming quarter, during which the two companies will work together to create new dishes for Tocaya Organica or select an existing menu item, with a portion of its proceeds to be donated directly to the charity. In addition to financial donations, Tocaya Organica will also help the nonprofit grow from co-branding efforts, in-store features, and marketing content. Nonprofits that place second and third during the quarterly competition will each receive a cash rewarding each organization with a substantial monetary investment from Tocaya Life Foundation to kickstart their campaign and future fundraising efforts.

To learn more about Tocaya Organica, visit their website at: www.tocayaorganica.com.

Check Out Our List of Meal Delivery Kit Options

DON’T BE A MASKHOLE! WeHo Launches Cover Your Face and Maintain...