NOOoo!!! By the Way Burger Closes After Three Years 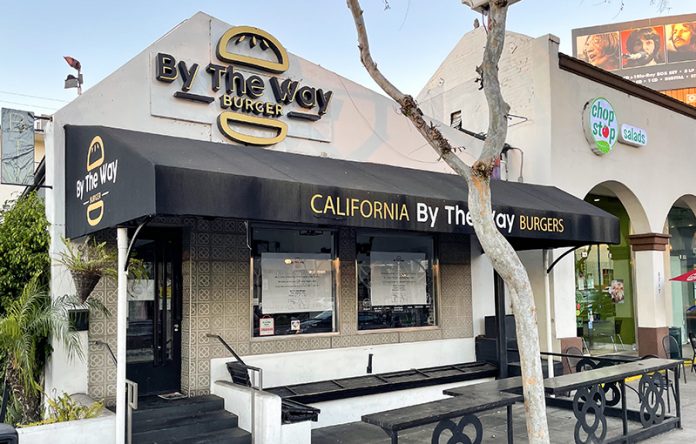 By the Way Burger closed for good this week after serving the community for the past three years. The owner announced this past Monday that this past Tuesday would be their last day of operations. “We are sorry to announce final closure of this location,” reads a sign at the door. “We thank you for your loyalty during these three years. If you miss our burgers, visit our Beverly Hills location.”

By the Way Burger was voted the best burger in polls throughout West Hollywood and Los Angeles. The burger joint was small, but they had four stars on Yelp, which is not bad considering they had 198 reviews. It was one of the first and few burger joints that was open during the COVID-19 shutdown for pickup and delivery, and was known to attract celebrities like James Van Der Beek, Ed Westwick, and Eva Longoria, who had their photos on their Wall of Fame.

They offered the Kobe Burger in honor of the late Los Angeles Lakers player Kobe Bryant. They were also vegetarian and vegan friendly, but most importantly, they were generous with their fries.

It is unclear why they closed. Employees from neighboring businesses said they were not getting that much traffic towards the end. Despite offering great burgers, their hours of operations were inconsistent because they were always short staffed. It was not out of the norm to call without getting a person on the line to take your order or driving to the location and finding a note that the restaurant was closed while employees took their lunch break, or they were just closed early for the day without an explanation.

The By the Way Burger in Beverly Hills location is at 8442 Wilshire Boulevard at the southeast corner of Wilshire Boulevard and Hamilton Drive, inside the The Saban Theatre, a historic Art Deco structure formerly known as the Fox Wilshire Theater designed by architect S. Charles Lee.

Despite having the same menu and being inside a beautiful Art Deco Building, the By the Way Burger Beverly Hills isn’t that generous with their fries.

The WeHo location will be missed.

BAHHHHHH HAHAHAHA, this cracks me the F up for a few reasons:
“ Despite having the same menu and being inside a beautiful Art Deco Building, the By the Way Burger Beverly Hills isn’t that generous with their fries.”

Enjoyed many burgers at this place. Sad to see it go.

By The Way, 5 Guys, Hamburger Haven, Burger Lounge, Wahlburgers… We’ve lost lots of burger places in a short time. I won’t go to Hollywood Burger because it’s basically the smoking section for Trunks. Guess Shake Shack is the only option.