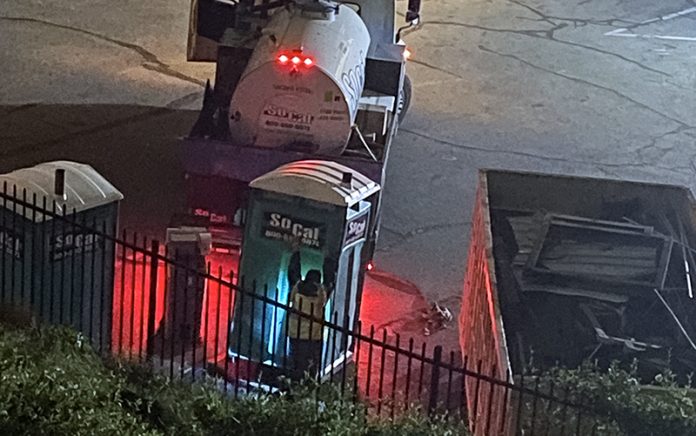 It is day two at the Supreme Store construction site, and noise continues to be an issue for at least one neighbor who lives right above the former Tower Records store building at 8801 Sunset Boulevard.

Jerome Cleary provided photos of construction crews unloading heavy machinery at the parking lot of the construction site yesterday morning, at 7:30 a.m., a half-hour earlier than when construction workers can legally begin any activity in West Hollywood. 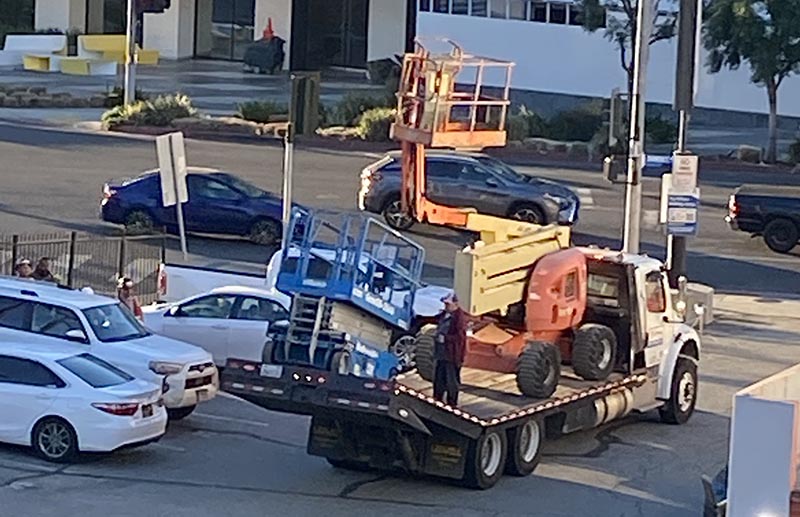 This morning, Cleary says he was woken up at 4:40 a.m. when a truck setup porta potties below his apartment window.

A meeting held on January 27, states that construction hours will be from 8 a.m. to 4:30 p.m. Construction vehicles will park on the site. The site will be fully secured with a construction fence around it that will be locked at night. They don’t anticipate street closures, but the sidewalk we be closed during some of the construction to install water lines. Construction workers are not allowed to make any nose with setup prior to 8 a.m.

Aaron Green of Afriat Consulting Group gave local neighbors a courtesy text informing them of activity will begin at the Supreme store construction site this week.

The new Supreme store will remain mostly the same with a few alterations. According to renderings, it will be all white. The windows facing Sunset Boulevard will be moved from the left, to the right side of the building, closer to the main entrance. The parking lot will be updated as well to comply with the American Disabilities Act.

The meeting last month also revealed that there will be jackhammering during the day. “We want to be transparent,” said Green, who lead the meeting. “There will be some noise, in particular as the parking lot gets removed. There will be some heavier equipment used, but it will be for a short period of time.”

Code compliance also did nothing about the extremely loud music coming from the super bowl parties this weekend at the pacific design center. Useless.