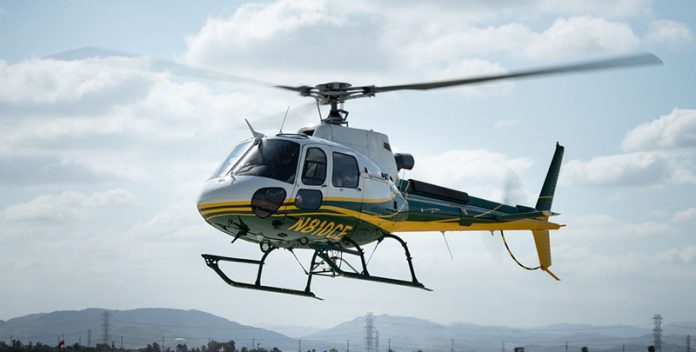 Some West Hollywood residents may wake up to helicopters hovering and making a nuisance over certain parts of the city in the next coming weeks. The noise is the result of an effort by Southern California Edison (SCE) to conduct aerial inspections on all its distribution poles and wires at some West Hollywood areas. The inspections are expected to begin this week, on Monday, August 19, and will take place for several weeks depending on air traffic and weather.

“We’re doing some aerial inspections in the area,” David Song, a representative for SCE, told WEHO TIMES. “Although there is high air traffic in your area, some of the work we’ll be doing is helicopters hovering and inspecting equipment. We’re doing some work during peak fire season. We don’t even say fire season because fire season is year-round, but peak season is coming up. We just want to make sure we’re inspecting all of our equipment. We want to make sure there is not going to be an ignition source for any fires up on the hills.”

Song says that SCE has done all the ground base inspections, but there are some things that ground base inspections can’t touch. They are using choppers in the next coming weeks. Times and days are uncertain. Helicopters will make their rounds a few days this week and a few days next week. They may be off for a couple of weeks and come back for a few more weeks. It all depends on weather. There are no precise times, but Song says that it’s going to start on Monday.

“The aerial inspections are expected to begin between 7am or 8am and go until no later than 5pm or 6pm,” He said. “They are getting images of our poles and wires and bringing it back for inspection. We’re actually capturing images of our lines and poles. It’s not like we’re flying over the same area for hours, but to the onlooker, it might look like we’re in one place for 30 minutes. We’re moving along the power lines, so we’re not staying in one area. It may look like we’re not moving, but we are moving and getting the job done.”

Areas affected will be in the north Sunset Boulevard vicinity. Lines start in West Hollywood and move up to the hills in the canyon. There is a major power line that goes West of Laurel Canyon. Another line goes up La Cienega and straight up to the hills. The noise will directly effect the people that live in the hills, but the sound bounces off the canyon, so more residents will be effected by the noise. Another line goes up Doheny Drive at the Beverly Hills and West Hollywood gateway.

“We understand it’s a bit of a nuisance, but it’s for public safety, so it’s important work and it’s something we’ve never done before.”