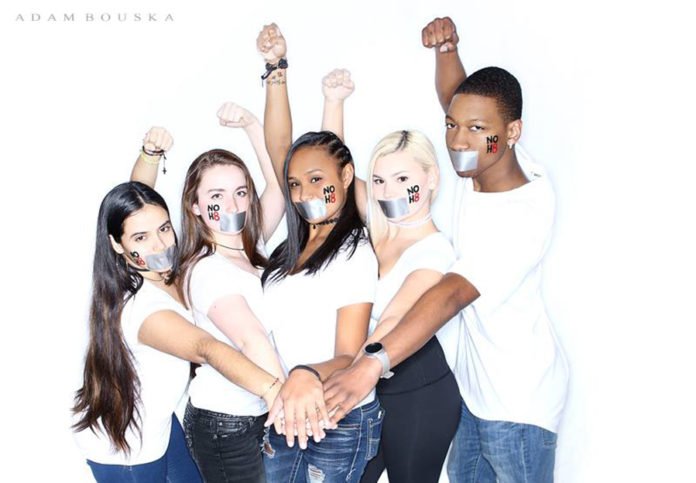 The LGBTQ hate continues and so does the NOH8 movement. The widely known NOH8 Campaign photoshoot is returning to the Andaz Hotel in West Hollywood on Sunday, January 7 from 2pm to 4pm.

People will have the opportunity to pose for an official NOH8 portrait and have it be heavily airbrushed by photographer Adam Bouska.

The NOH8 Campaign is a photographic silent protest created by Bouska and partner Jeff Parshley. The launch of the campaign was in direct response to the passage of Proposition 8. The NOH8 Campaign has grown to over 56,000 faces and continues to grow as the campaign travels the world with its no hate messaging promoting marriage, gender and human equality through education, advocacy, social media, and visual protest. The campaign began with portraits of everyday Californians from all walks of life and soon rose to include politicians, military personnel, newlyweds, law enforcement, artists, celebrities, and many more from across the globe.

NOH8 recently celebrated nine years on December 13. The City of West Hollywood proclaimed December 13 as “NOH8 DAY” in 2011 to recognize and help celebrate the NOH8 Campaign’s then third anniversary of activism and raising awareness on the fight for Marriage Equality and anti-discrimination on a global level through education and interactive media with over 18,000 NOH8 portraits. Mayor John Duran presented the proclamation at the celebration at the now demolished House of Blues on Sunset Blvd.

Funds raised by the NOH8 Campaign will be used to continue promoting and raising awareness for marriage and human equality as well as anti-discrimination and anti-bullying through NOH8’s interactive social media campaign. This includes bringing the campaign to other cities and countries around the world, creating and compiling images for our ongoing large-scale media campaign, and covering the costs of the daily operations and maintenance necessary to run this rapidly growing campaign out of our Burbank Headquarters. The NOH8 Campaign is a tax-exempt charitable organization under section 501(c)(3) of the Internal Revenue Code.

ANDAZ Hotel is located at 8401 West Sunset Blvd., West Hollywood, CA 90069. The shoot will take place at the Mezzanine Level.