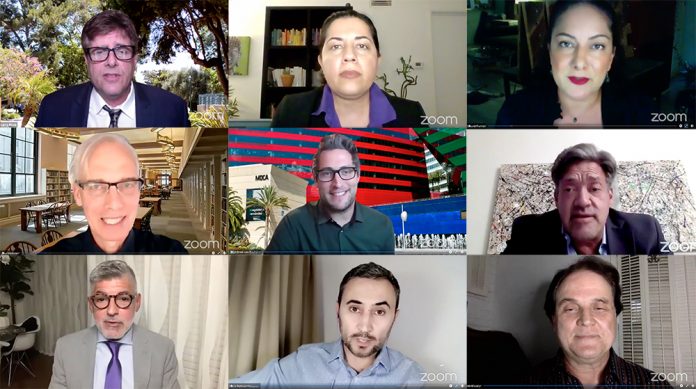 The City of West Hollywood and West Hollywood Chamber of Commerce hosted a West Hollywood City Council Candidate Forum on Tuesday, October 6, via a virtual Zoom meeting. The event was moderated by NBC4 Anchor and Reporter, Robert Kovacik. Questions were coordinated by the independent and non-partisan organization League of Women Voters of Los Angeles.

Two City council seats are to be filled for four-year terms in the November 3, 2020 General Municipal Election. Nine candidates are on the ballot, two of which are incumbents. Each qualified candidate was invited to participate at the forum. The candidates include: Larry Block, John Erickson, Noemi Torres, John Heilman, Sepi Shyne, Christopher McDonald, John Duran, Jerome Cleary, Marco Colantonio, Mark Farhad Yusupov.

At the beginning of the virtual meeting, it was made clear that the candidates were there for a forum discussion. This was not a debate. There was no contentious back and forth, or interruptions between the nine candidates. The forum was mostly a civilized question and answer session with each candidate being mindful of their time.

When asked why voters should vote for them, candidates each took turns making their case to the voting West Hollywood community.

Larry Block feels people should vote for him because he would represent an independent voice in the city council and that he’s resident-centric. He pointed out that he doesn’t take money from developers or unions. He’s a business owner who has been affected by the COVOD-19 pandemic and has worked hard to keep his doors open. He also signs checks and is a builder who takes initiative.

John Erickson wants your vote because he’ll bring a progressive voice to the city council. He spoke of integrity, leadership and bold ideas and hopes to take the council into the next generation. He pointed to his six years as a West Hollywood City employee where he was the president of the City’s employee union, he is endorsed by employees of the city and a host of Democratic Club groups. He says the city needs progressive leadership in the council who will work to meet the needs of residents, businesses and community members. He also pointed out that he’s under the age of 40 and that he would fight for WeHo’s future.

Neomi Torres feels she should get voted into the council because she wants to be the voice and vessel to the community to make sure people feel heard. She believes she has the stamina to deal with issues brought on by COVID. She said she would be available to LGBT people, help small businesses and work for tenants. She also hopes to work to give homeless people a safe haven in the City and promises to bring integrity and transparency to the council.

Incumbent John Heilman brought up his long history of serving the community and how he helped establish the city’s social services, drafting rent control laws and a history of working with the business community. He said he has always looked out for the best interest of the entire community and he reminded everyone he has a record of advocating for affordable housing.

Sepi Shyne hopes residents will vote for her because she’s an independent voice and an advocate for the community. She’s not taking money from developers and she highlighted how she’s been an LGBTQ advocate for over 20 years. She says she’s running a people campaign representing all communities. She would also bring her business expertise to the council as an owner of two businesses and she’s a lawyer who represents small to mid-sized businesses that could be an asset in the city’s economic recovery. She said she would lead with compassion and fight for renters since she is a renter herself.

Incumbent John Duran hopes to serve WeHo citizens for four more years. He brought up his history with the City of West Hollywood dating back to the mid-70s and how he’s seen the city change in almost 50 years. He pointed out how his service as a council members for the past 20 years has helped transform the city into a desirable place to work, live and play. He says he’s very protective of the city’s brand and of the city’s Boystown, Sunset Strip, Melrose Ave and other iconic establishments in the city.

Jerome Cleary has been a resident for 34 years and he says he’s been a community advocate who is not taking campaign money from developers, special interest groups or attorneys. He says he’s spending less than $2,000 of his own money for his campaign. He ran 15 years ago and he says a lot has changed. He assessed that residents are unhappy with the crime and the homelessness in the city. He says residents want new blood and he wants to change the city and make it better.

Marco Colantonio spoke of his love for West Hollywood. He says he’s an independent candidate who is not currently a political appointee. He’s proud of his history of speaking truth to power as former publisher of WEHO TIMES. He said he has respect for the incumbents and those who serve city council, but he thinks they’re out of touch. He believes the city needs new ideas and fresh voices independent of developers and special interests and hopes to find innovative ways to bring back West Hollywood.

Mark Farhad Yusupov thinks you should vote for him because he has been a resident for 20 years and is currently serving in the Russian Advisory Board. He lives on the west side of WeHo, but represents residents from the east side. He has been a community organizer and says he’s not aligned with any groups, but works for tenants and is also a home owner. He believes he can bridge the gap between WeHo’s east side and west side. He’s not a politician and doesn’t believe the city should be run by people with special interests. He believes he can bring great changes to the council by putting residents first.

The candidates were divided into three groups for some rounds of questions and all nine were allowed to answer single questions at random. Topics of discussion included the economic fallout of West Hollywood during the coronavirus pandemic and what they believed the city got right, or wrong. They discussed closed businesses due to commercial high rents and whether or not there should be a vacancy tax or incentive programs. They were asked whether they support density in certain parts of the city to help meet West Hollywood’s housing needs. Other topics included a discussion on public safety and homelessness and whether or not the candidates thought the West Hollywood Sheriff’s provided a good service for the residents of West Hollywood. The candidates also chimed in on the preserving the city’s LGBT identity.

The entire forum stayed the course at under two hours. To get to know the candidates and learn about their positions on city issues click on the youtube video below:

For additional information about voting in this year’s General Municipal Election, visit www.weho.org/elections, or simply call the City of West Hollywood’s City Clerk’s Office at (323) 848-6409, or call the California Secretary of State’s Voter Hotline toll-free at (800) 345-VOTE (8683). For people who are Deaf or hard of hearing, please call TTY (323) 848-6496.