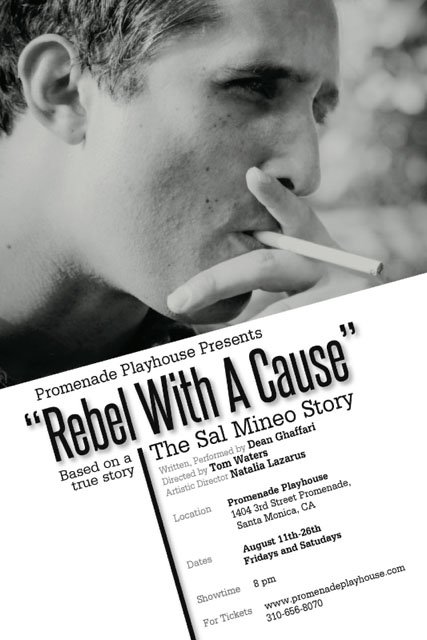 Ghaffari brings to life Sal Mineo and a host of characters instrumental in his journey in this energetic, historical backstage view of one of America’s greatest actors and first Gay Icons.

“Sal Mineo was complex and mysterious”, Actor Dean Ghaffari says. “There was this phenomenon called Mineo-mania in the early 60’s. Sal Mineo was huge! But by 1970 he was virtually forgotten. I felt this need to tell his story on stage”.

And so it goes, the bigger they are the harder they fall. Come join Actor Dean Ghaffari at The Promenade Playhouse on an excursion of The Life and Times of Sal Mineo.

The Promenade Playhouse hosts the Los Angeles premiere of Dean Ghaffari’s one-man show “Rebel With a Cause: The Sal Mineo Story” before it heads to New York in September. Tickets on sale at  www.promenadeplayhouse.com

Sal Mineo was an actor propelled into stardom by his performance as “Plato” a troubled, homosexual adolescent in the James Dean teen angst classic, Rebel Without a Cause. (1955).

He was nominated for the Academy Award for Best Supporting Actor twice. Once for his role in Rebel at just 16 years old, playing opposite Natalie Wood and James Dean and then again for his role as Dov Landau in Exodus (1960).  Mineo was also a Golden Globe winner and a gold record-selling pop singer.

Ahead of the times, Sal Mineo truly was a “Rebel With a Cause”. He was a prominent figure for gay rights before he was tragically murdered. Some say his murder was directly related to his gay activism. Or perhaps a spurned lover, no one will ever really know.

By the late 1960’s, Mineo became one of the first major actors in Hollywood to come out of the closet. He also directed and starred in gay play, Fortune and Men’s Eyes, a prison drama that featured a graphic rape scene in a shower. A young Don Johnson, later of Miami Vice fame, was Mineo’s “bottom” in the scene.

Many believed the fact that the actor was gay and living an “open secret” may have caused Mineo’s career slide to begin with.

Things started to heat up for his acting career again after a decade or so of bit parts and cameos in various television shows and plays, when he was cast as a bisexual burglar in the comedy P.S. Your Cat Is Dead. That comeback ended on February 12, 1976, when on his way home from rehearsal an assailant ambushed Mineo in the carport behind his apartment building on Holloway Drive in West Hollywood. He was stabbed once in the chest. He cried out for help and then died on the spot. Sal Mineo was 37.

Once a teen idol, his glory days seemed a long way off from that fateful day in February when Mineo was murdered.

After living the high life of luxury with mansions, butlers, maids and fast cars as well as providing an extravagant lifestyle for his parents, Sal Mineo died with only $20 in his pocket.

The LAPD originally pursued “the gay angle” on the murder, suspecting perhaps that Mineo had picked up “rough trade”; tough guy predators cruising well known gay hangouts, and then robbing the men who took them home.

It took nearly three years to catch the killer as rumors swirled – a jealous lover maybe; a drug deal gone bad or even an S&M sexual encounter gone too far. Mineo’s murderer turned out to be a career criminal Lionel Ray Williams who was trying to rob him. Williams was using a job as a pizza delivery man as a front to commit a series of serial robberies.

While Williams was serving a 57-year prison term for a dozen of those crimes in 1979, a prison guard overheard him telling another inmate that he’d stabbed Sal Mineo. After the police proved that Williams was the murderer, he eventually received a life sentence.

Many of Mineo’s friends still believed that Williams was not the murderer, especially since a blonde white man was seen fleeing from the apartment building at 8563 Holloway Drive in West Hollywood where the murder occurred.

For More Information about:

“REBEL WITH A CAUSE – THE SAL MINEO STORY”

Promenade Playhouse is also the home of the Los Angeles Performing Arts Conservatory – nurturing the artists of tomorrow thru the LAPAC Film School and the LAPAC Acting School.