Videos posted on Twitter show two individuals in a large Nazi truck covered with anti-semitic messaging and getting into heated confrontations with community members on Santa Monica Boulevard this afternoon, Saturday, May 21, 2022.

“A group of Nazis have rampaged down Santa Monica Blvd from Beverly Hills to West Hollywood harassing Black people, gay people and Jewish people,” reads a tweet by the WeHo Social Justice Twitter account @wehosjc. “A big truck in their caravan is covered in hate propaganda surrounding the great replacement theory.”

Nazis in West Hollywood right now.
Harassing people through out the city.
LASD notified and near by but taking no action.@WeHoCity pic.twitter.com/bpMMXMzuI5

Other witnesses allege that the drivers waved a mangled rainbow flag, mocked Jewish people’s attire, yelled at Black people to go back to Africa and made some demeaning remarks against gay people and Asian people. A Video shows one of the men approaching a car saying, “Jesus loves you,” and then yelling anti-semitic slurs.

One man wore a shirt with a Black Sun symbol known for its ties to Nazi Germany and was later adopted by Neo-Nazis. The men streamed their confrontations live for their followers and cars following behind them also filmed the caravan as it made its way east on Santa Monica Boulevard.

Some community members expressed frustrations towards the West Hollywood Sheriff’s.

“Thank you #LASD for doing NOTHING once again to stop escalating violence in our city,” tweeted Sarah Moany. “THIS CITY IS UNDER ATTACK- where are our leaders? We know the sheriff aint doing sh*t! You all need to go!”

Videos also show men confronting the Neo-Nazis and threatening to fight them after the men surrounded a Black woman at a gas station.

“I have sent this video to our city attorney to review and let us know what we can do,” said West Hollywood Mayor Pro-Tempore Sepi Shyne who was tagged in some of the tweets. “The hate speech is vile, antisemitism, homophobic and disgusting.”

The Nazi truck is yet another example of anti-semitism targeting the West Hollywood community. Residents reported finding antisemitic flyers throughout West Hollywood’s eastside during this past Passover. The leaflets were stuffed in ziplock bags with messages blaming Jewish people for Russia’s war on Ukraine, stating “every single aspect of the Ukraine-Russian war is Jewish…”

sickening. if i remember correctly, there was also a lot of anti sematic chanting at an anti vax gathering a few months back.

The offending group GDL is not representative of the health freedom movement, which is the most diverse and authentic popular movement to emerge worldwide in recent history.

There was a small sign comparing vax mandates to Nazi tactics at the rallies in front of Bardot. Weho times’ false and biased coverage was rerun by Saudi-funded propaganda rag the Independent. Congrats, Paulo on your “journalism” at the service of oligarchy.

You are absolutely correct Jimmy. Aside from antisemitic signage comparing their suffering to those exterminated in the Holocaust, the Bozos were also shouting, “No Nazi Restaurant! No Nazi Restaurant” from a bullhorn. “They want you to take the Fauci Ouchy or you’re not allowed to eat their food,” one protestor yelled on Santa Monica Boulevard. “This is the start of a new Holocaust. It’s like the Star of David. If you don’t have the experimental jab, you have the Star of David.” And let us not forget the horrible anti-semitic/anti-vaxxer posters and pamphlets that plagued the city when people stopped… Read more » 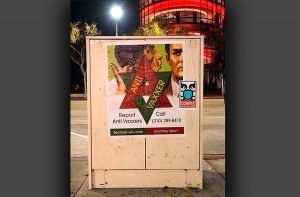 Paulo deleted my reply so we’ll let his bias speak for itself. Intellectual cowardice personified (with a face to match)

Oh please, you get your fair say on here West. I deleted the comment where you suggested I should be executed like a Nazi journalist a while back. And I deleted the one today, because it’s spam. You are not using this outlet to spread misinformation or to promote your “fetch” event. Now regarding what happened at Harlowe: You play crazy, but you’re not stupid. You never returned to those vaccine protests after that first night because you saw exactly what I reported. You saw the aggression, the fighting, the connection to Proud Boys, the rightwing politicizing of the vaccine,… Read more »

Been in the organizing game for over 15 years and you’re never anywhere that matters.

How nice to get to use your own platform to silence, personally antagonize and smear private citizens and grassroots activists.

From the National Black Caucus of the Green Party USA: “Vaccine mandates and vaccine passports are among the most vile, unconstitutional, immoral, unscientific, discriminatory and outright criminal policies ever enforced upon the population and goes against everything the Green Party stands for under Social Justice. These policies are coming from an out-of-control government at the behest of the pharmaceutical industry. The mainstream media and social media are also working in lock-step to censor any and all doctors, scientists, and investigative journalists who have an opposing view or who even question the current mainstream media orthodoxy.” Source: https://www.blackcaucusgreens.org/we_say_no_to_mandates Sounds like they… Read more »