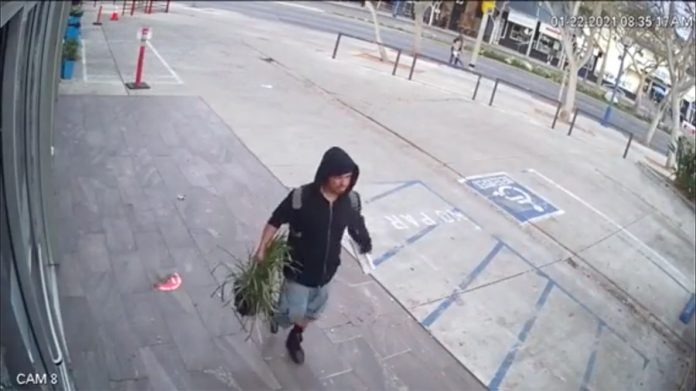 My 12 Step Store, the recovery gift and book store located at 8730 Santa Monica Boulevard, is among businesses in the WeHo Tri-West area that continue to be targeted by vandals and thieves. The store is only a seven-minute walk from the West Hollywood Sheriff’s station.

This past Friday, January 22, 2021, video surveillance starting at 8:34 a.m., captures a man helping himself to one of the store’s outdoor plants. The video footage sent to WeHo Times shows a man nonchalantly walks up to the front of the store. He bends over and gently pulls out the kangaroo paw plant out of its planter and he calmly walks away east towards Huntley Avenue. A gardener barely notices the thief as he blows leaves off the sidewalk only a few feet away.

“This time, just the plant was stolen,” said owner and founder of My 12 Step Store, RJ Holguin. “I’ve had to replace the planters numerous times. We had the entire thing stolen and the planter and plants were stolen again during pride weekend. We wired the planters to the ground, so they stole the bench. Another time the bench was taken and we found it down the street. It looked like it had been kicked around, so off we go to the hardware store to get it repainted. There was also that time someone left a lit cigarette on the bench and it burned the wood. We provide the bench for customers to sit and wait while we serve individual customers inside to keep them and our crew safe.”

Holguin says he didn’t bother to call the WeHo Sheriff’s Department this past Friday.

“I didn’t call the police about the plants because the last time I did that, the police almost laughed at me,” he said. “I said this was the second time. When they asked me the value, I told them they were $69 each. They didn’t think it was that big of a deal and I can’t file a report through my theft insurance. The point is, it happens continually and it all adds up. The loss so far is upwards of $500 when you add the times I’ve had the replace plants and planters and our having to replace our outdoor bench. And we had to set up surveillance cameras.” 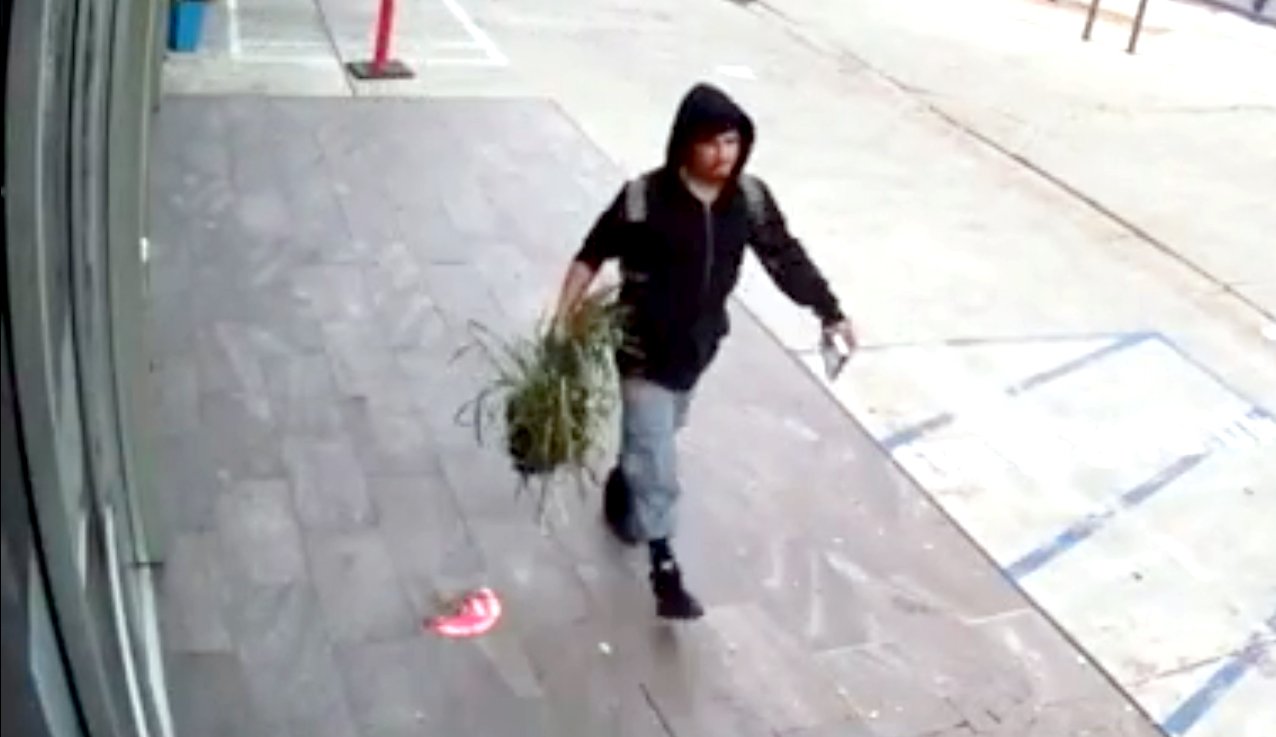 Holguin did get the Sheriff’s involved earlier this month, January 3rd.

“The mailboxes were all broken into at this shopping center and all the mail was stolen, including checks from different businesses,” he said. “I contacted the police and the landlord. It’s a challenge to deal with all of this through the pandemic, of course. We called the police for the mail burglary because once they steal mail, they get their hands on checks and it opens us up for fraud. We currently have two fraud cases. They can make a fake check and write any amount. Especially now with people making virtual deposits. They deposit them into an account and then they close the account.” 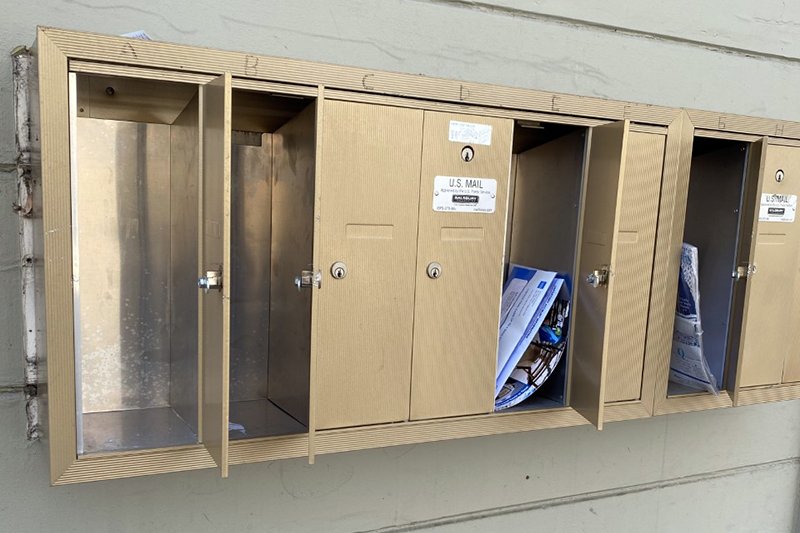 Days prior to the break-in of the mailboxes, the Dayglow coffee shop located a few doors down, and across the street from My 12 Step Store, at 866 N Huntley Drive, had also been hit with attempted robbery and vandalism.

“Be on high alert for whoever owns businesses around the Tri-West area,” reads a post by Dayglow’s owner Sherye Ifergan, in a West Hollywood Facebook group, on December 31, 2020.” My husband and I own Dayglow across the street from where ‘the Gym Sportbar’ used to be. The past two months have been off in this area with people trying to break in when we never had this issue. Last night we had someone try to break the windows using giant rocks/boulders at night, and when unsuccessful, came back during business hours staring down the staff and trying to get into the business when they shut the doors. Cops talked to the guy and let him go because he didn’t ‘successfully break in’. It was attempted. It wasn’t until he came back and proceeded to break into the cars parked on Huntley and Santa Monica that he was taken into custody. He was with another guy that got away and now he’s back at 9pm and threw trash all in front of the business.”

“Try to keep an eye out for this activity in front of your businesses / homes,” she added. “It’s scary cause our coffee shop is off a nice residential street. I can only imagine what the home owners go through.”

“I live on Huntley,” Ron Torres responded to the post. “Whenever I walk up the street I’m always very mindful of my surroundings and what’s going on.”

The West Hollywood Chamber of Commerce also chimed in:

“In order to assist the Sheriff’s Department in the prosecution of trespassers on your residential or commercial property, the Sheriff’s Department has implemented a Letter of Agency program,” The Chamber commented. “Owners, managers, or tenants of a property can authorize Deputies of the West Hollywood Sheriff’s Station to arrest and remove any person present on the property without lawful business. Property owners can sign up to twelve months of letters at a time to be kept on file at the West Hollywood Station. https://www.weho.org/…/letter-of-agency-trespass-arrest… 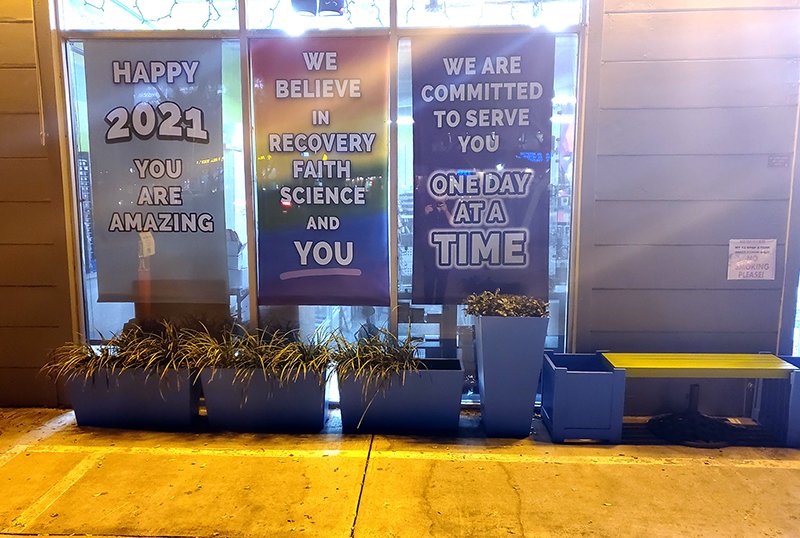 Holguin attributes a lot of the problems with businesses in that area to the closures during the pandemic.

“It’s like the Wild, Wild West in this area at night,” he said of the Tri-West and surrounding areas. “Businesses become a target because they are closed, appear to be closed and there aren’t too many people on the street to deter would-be burglars from doing property damage.”

Clearly the relaxed criminal policies by the DA have prevented the PD to do their job while emboldening criminals to ransack our properties. Yet, the WehoTimes (Murillo) continues to focus on dying retail establishments while he cries foul.

How about the lax enforcement by the Sheriff’s Dept? They will only show up if there is blood or donuts and blood doesn’t get them there that fast.