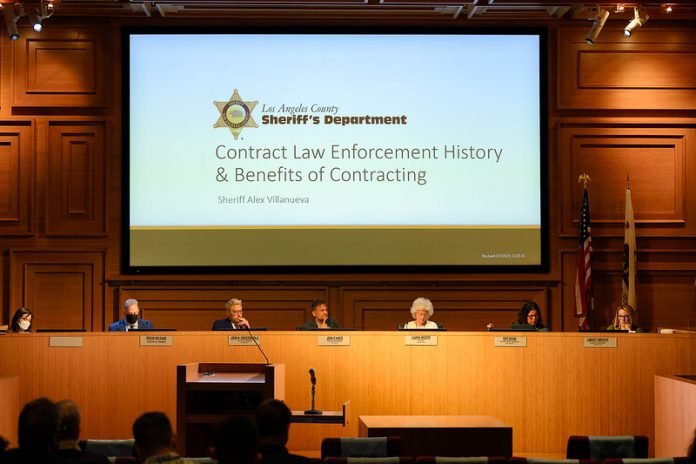 The end result the long discussion was a unanimous vote to pass a motion made by council member John D’Amico (and seconded by council member Erickson) to, “move forward with auditing the cost of services [from LASD], including overhead costs, line items of those overhead costs, getting a copy of the once-every-five-year study and sharing that with our Public Safety Commission and ourselves, increase the ALPR cameras, have a public safety strategy that includes–not just funding–but a service coverage, including the METS team, mental health and human services, as well as additional security cars patrolling our streets [by unarmed patrols]… and finally the budget question, regarding the reduction of officers, would be resolved in the budget discussions coming up, but it is not actually suggested on any of those things that we are voting on this evening.”

A motion by Public Safety commissioner Soon-Shiong recommending to the City Council to reduce the Sheriff’s Department contract by $3,200,000 or the equivalence of 10 sheriff deputies, has been a topic of much debate over the past several weeks, after the motion passed and was presented before council. Community members who don’t feel safe in West Hollywood are deeply against defunding the police and voiced their opposition during the public comment portion of the meeting.

Other community members were in favor of cutting back sheriff deputies and brought up allegations of racism with the Los Angeles Sheriff’s Department as well as police gang activity that makes them feel unsafe, along with a lack of transparency, urging the council to look for other forms of policing outside of the West Hollywood Sheriff’s Department.

Councilmember John Erickson voiced concerns that community members did not feel safe in West Hollywood. He presented several examples where there was a disconnect between the public and law enforcement.

“How many more officers is it going to take to make our residents feel safe?” He asked. “…I hear a lot of members of the public say that they are scared and that is something that I take very seriously regardless of whatever people say about how I actually feel… I still don’t know if we have a concrete plan to making individuals feel safer and that worries me because you are still getting roughly $19 million, a big portion of our budget, and people still feel unsafe.”

Mayor Pro-Tem Sepi Shyne asked for checks and balances regarding various topics from the nature of past LASD audits in Los Angeles, to WeHo Sheriff deputies working outside of West Hollywood, and whether or not the city fronts the bill for gas mileage used by sheriff vehicles bearing the West Hollywood name in places like Universal City (WeHo is not billed gas spent outside of city limits). She also debunked a report by safewise.com, which put West Hollywood in the bottom of the list of Safest California cities (212 out of 230) for a second year, which has put the community ill at ease.

Kristin Cook, the City of West Hollywood’s Public Safety Director acknowledged that the Safe Wise website is oriented around sales and marketing of home security systems and security cameras, and not an official news source. Their date is not from the city or from the Sheriff’s station, but according to the website, the company compiles FBI data, and uses that date to sell security systems to customers.

Council member Lindsey Horvath addressed confusion, misinformation and great concern that exists in the community. She spoke of the importance of language and gave examples such as when reports speak of follow home crimes, “It suggest people are being followed to their homes,” she said. “But in speaking with the Sheriff’s Department before this meeting, they indicated it’s not that people are being followed home, they’re being followed when they leave an establishment. Wording matters.”

Council member Horvath pointed out that half of the grand thefts are from stolen phones because the price has gone up on cellphones. She added that Part 1 Crimes also include human trafficking, which were reported in local news reports, but there are no reports of human trafficking in the report that was presented before the council, or to the Public Safety Commission.

She also defended her appointed commissioner Soon-Shiong, stating that it was because of her courage to speak her mind that the conversation was being had by the community and city council. “I find it disgusting the way that she has been vilified in local blogs and demonized for offering an alternative point of view. You can disagree with someone–you can very seriously disagree–but to say that she must not be able to speak English, to not utter her name, to put the decision of five commissioners, all of who are new commissioners who have a new perspective on what public safety ought to look like in this city–clearly because they voted for something different. To put that responsibility solely on the shoulders of one commissioner is rooted in racism, sexism and othering of people in community who have a different point of view, and it’s unacceptable.”

Mayor Lauren Meister pointed out that in 2020, she and council member D’Amico brought forward an item to do an audit with the Sheriff’s Department and was happy that the council would get electronic data. She also recommended an increase in LAPR cameras because she believed they would be useful in finding people who commit crimes in West Hollywood. She said she looked forward to more transparency from the Sheriff’s and requested a report making comparisons to other urban cities in California and nationwide to have discussions in context.

“Every bureaucracy can use a haircut,” said Councilmember D’Amico during his final comments. “But the thing you want to be sure you don’t do is cut off their hands or cut off their head. I think it is important for us to remember that there is undoubtedly some savings in our contract with the sheriff’s. Whatever you are, what ever you do, there are ways to save money. They city cut the budget by 25 percent and services were still delivered.”

Councilmember D’Amico pointed out that the city of Los Angeles increased its housing social services funding by what he believed was close to 1,000 percent, and the homeless problem got worse. “We need a public safety strategy that really looks at fiscal responsibility and services coverage across all opportunities, and clearly our discussion this evening—we understand even more deeply how much more social services are part of public safety in our city.”

In closing comments Mayor Pro-Tem Shyne asked for more data and to have further discussion before moving forward. “We may need to look at having security patrols in the neighborhoods to bring more safety,” she said. “…our priorities are seeing what money we can put into our social services that we know work. We need to also really prioritize looking at what a reduction, if any happen in the contract–what would it mean as far as patrol deputies? Commander Ramirez said, ‘If we reduce we can’t solve crime, we can’t do this, this is going to happen”–all these things that cause a lot of fear, but I want data. I want to know if we took the Public Safety Commission’s recommendation, what would that do?”

Like JE stated PEOPLE DON’T FEEL SAFE!!! If there were any ideas to defund the police, hopefully the people are heard. do not defund. We need to feel safe again. Like Enough says. Enough is enough.

The residents are overwhelming AGAINST cutting the sheriff’s budget (thus the number of deputies).