Micky’s WeHo Bar is now hiring in preparation for its grand re-opening. The bar, dance club, and restaurant, located at 8857 Santa Monica Boulevard, has posted a help wanted sign on its glass doors at the main entrance.

Micky’s is now accepting applications for waiters/food runners, and bar backs. Resumes should be emailed to adame@micky’s.com.

The popular two-story dance club and bar is getting ready to open early next month.

“Hey everyone,” reads a post on their official Facebook page. “So many of you have inquired through social media and texts and in person about our reopening plans. We are in the middle of a little ‘nip and tuck’ and are planning to be back early in July. Stay tuned for future announcements about a definite date and time…… and see you all soon!!!”

Bars like Micky’s, Motherlode and Fubar remain closed, despite the Los Angeles County Health Department’s updated Health Officer Order which allows bars and clubs to operate at 100% capacity. According to a source, Micky’s has not been touched for most of the pandemic and is in need of some upgrades. Motherlode is also closed due to upgrades to their restrooms. Fubar remains shut down without any signs of re-opening any time soon.

Micky’s WeHo Bar has shown signs of life these past couple of weeks. The black vinyl covering the bar for most of 2020 was removed, the front patio has been cleaned up, and the entire building received a fresh coat of paint earlier this month.

DJ Paulo Ramirez also posted that the popular Showgirls Review is coming back to the Micky’s Stage. This made my entire week when it was sent to me,” he posted on his Facebook timeline in reference to a Micky’s flier announcing the return of Showgirls. “If you know, you know… Showgirls WeHo reopening date to TBA.” 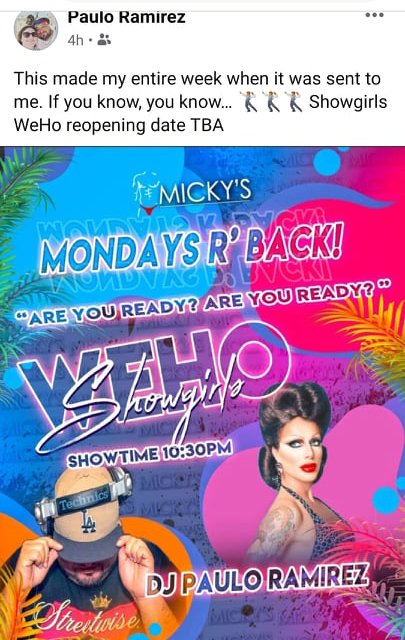 Most noticeably that Micky’s is back to life is the colorful mural by artist SKUT (Scott Lewallen) that is getting some finishing touches as of the publishing of this piece. The uplifting mural will be part of the bar’s grand opening next month.

We are told a press release announcing its opening is coming soon.

Micky’s WeHo Bar was established in 1989. It was celebrating its 30-year anniversary when it was forced to shut down last March in response to the COVID-19 pandemic.

I wish all the best for Mickeys and am so glad to see that they are reopening. I have been a satisfied customer since the day they opened their doors as Mickeys years ago. I am back and forth from Palm Springs and will definitely be a regular. Much has changed in WEHO lately and I am glad to see a true “Gay” bar is still alive and well.

Micky’s had a whole year to get their sh*t together. I don’t understand why they are just now looking for staff. that is ridiculous. Just saying.