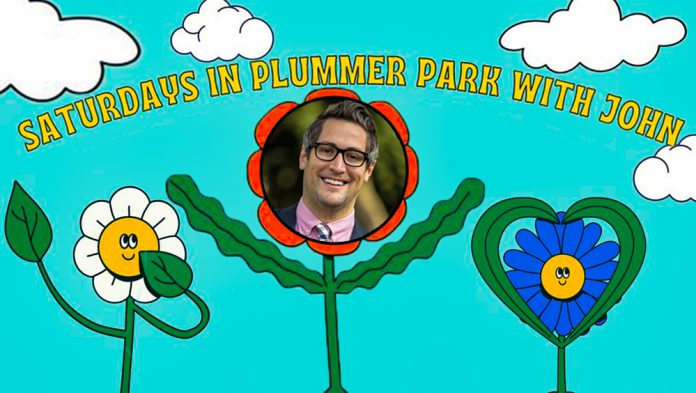 “It is so important that we as elected officials are connected with our residents, businesses, and major stakeholders,” reads a social media post by West Hollywood Council Member John Erickson. “That’s why next week I’m starting a new monthly event called Saturdays in Plummer Park with John at 10 a.m.”

Council Member Erickson will be sitting around the Great Lawn at Plummer Park in West Hollywood to meet community members, answer question, hear concerns, connect people to services and be open to chat with the public in an outdoor park setting.
The first of ongoing “Saturdays in Plummer Park with John” will take place on August 28, 2020 at 10 a.m. at 7377 Santa Monica Boulevard.
For updates on the event, visit the Facebook events page: https://www.facebook.com/events/533591141222667/?ref=newsfeed
To learn more, read his his WeHo City bio below:

Councilmember John M. Erickson was elected to the West Hollywood City Council on November 3, 2020 with the commitment to uphold the city’s founding vision for a forward-thinking, diverse, and tolerant community.

The immediate past Vice Chair of the City’s Planning Commission, Councilmember Erickson’s priorities on the City Council include: overcoming COVID-19 through sensible health practices and economic recovery; creating more affordable housing and protecting renters’ rights; reducing traffic through alternative transportation strategies, fighting climate change and making our city more sustainable; and implementing policies that make the city truly free of prejudice and welcoming to all.

Councilmember Erickson has earned a reputation as a fearless, tenacious, and effective voice for those who need one. His advocacy work includes serving as a National Board member of the National Organization for Women and President of the ACLU Southern California. In 2017, he became Governor Brown’s appointee to the California Commission on the Status of Women and Girls and served as an organizer for both the Resist March and the historic Women’s March Los Angeles. He serves on the Board of the Women’s March Los Angeles Foundation. Councilmember Erickson was part of the End Statute of Limitation on Rape (ERSOL) Campaign, which overturned California’s statute of limitations on rape and sexual assault in 2016.