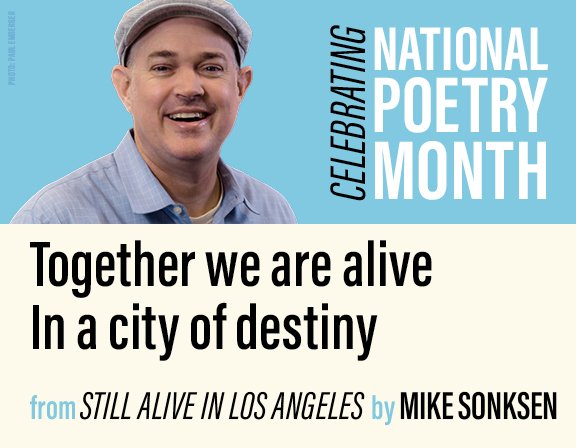 Mike Sonksen is our fifth poet profile who is featured at The West Hollywood Gateway, for Poetry Month 2022. Located at 7100 Santa Monica Boulevard, The Gateway continues to support poets each year on the main digital billboard at the courtyard.

Letters to My City, Poetics of Location,I Am Alive in Los Angeles!

How many years in Los Angeles? My entire life.

What can you tell us about the excerpt on the billboard?

My excerpt on the billboard connects to my gratitude for both being alive in this time and to be engaged in the creative community. I came up in the scene with poets, painters and musicians and it’s been a mutual admiration society of folks encouraging and supporting one another. I am deeply thankful for the many people I have worked with and shared space with over the last two decades. As intense as the grind can get, I do my best to remember to be thankful for all the people around me and how interdependent we all are. As Rumi says, “we are all walking each other home.”

Does the West Hollywood Gateway or WEHO have significance for you?

The West Hollywood Gateway has great significance for me because WeHo is such an important city.  Whenever I see the Gateway, I feel solidarity because Weho has long been a haven for folks who needed a safe space and even for it’s pioneering style of urbanism and innovative architecture. I appreciate the city’s progressive spirit. We need many more areas like it.

When and how did poetry find you?

I started writing poems in high school, but it really found me in a major way my freshmen year at UCLA right after the Rodney King Uprisings in 1992. The mix of both my own rite of passage and the intense social conditions of the time made me a poet.

What has been a big poetry career moment?

Initially it was when one of my poems played on KCRW or when I shared stages with some of my heroes like Wanda Coleman, Luis Rodriguez and Lewis MacAdams but in more recent years, It’s been seeing the success of my former students.

What has teaching writing meant to you?

I love teaching writing. Writing is a both a democratic and spiritual practice that empowers people like almost nothing else. I have found that by helping students develop their writing skills and giving them the space to grow with their writing, it becomes a symbiotic process that not only helps people individuate themselves, it gives them a lifelong tool to reflect and evolve. I have grown a lot in the process as well. I love how when you teach writing it is such a win-win scenario.

How can people find out more about you and your workshops?

People can buy my latest book, Letters to My City or follow me on social media @mikethepoetLA