Med Men dispensary was among the West Hollywood Businesses that was hit with property damage and looting during the George Floyd riots last night. The front window was smashed and vandals were able to penetrate through the gated shutters, but only a few things were stolen from the front of the store.

“Very little was taken,” said armed security officers Max Tehranchi, who has been watching the front of the store the entire night. “They put everything in the back, so looters weren’t able to steal very much. The store on Robertson, they don’t have the metal gate, it’s pretty much glass, they were hit hard. Everything was wiped out.”

Tehranchi reports that police officers were at the scene and shot at looters with pepper pellets, which are a pepper-spray projectile, also called pepper-spray balls to deter vandals from entering the building. The pellets contain a powdered chemical that irritates the eyes and nose in a manner similar to pepper spray.

“I remember the riot of 92 and back then looters were taking things from 7-11. Back then there were no cellphones, there was no social media, so it was easier to contain. This time the looting spread everywhere and dispensaries were a target.”

The liquor store next door to Med Men was not hit the the George Floyd riots last night.

Eric, the owner of Zen Healing West Hollywood stopped by to asses the damage. There were attempts to hit his business as well, but he got word from one of his employees that he overheard a group of guys in front of IHOP across the street who were talking about breaking into Zen. Eric says he immediately shut the doors. He invested on steel shutter shields that were impenetrable, so Zen was not hit although several attempts were made. He caught footage of suspects trying to break into Zen’s van parked out back.

“It was pretty scary,” he said. “I just wanted to keep my employees safe and have everyone out before curfew. I had two guards on duty the entire night, but the city of West Hollywood doesn’t allow armed security guards and my security company said they wouldn’t go out without being armed. The city will fine you if they see a firearm on you. No firearms allowed in the city of West Hollywood.” 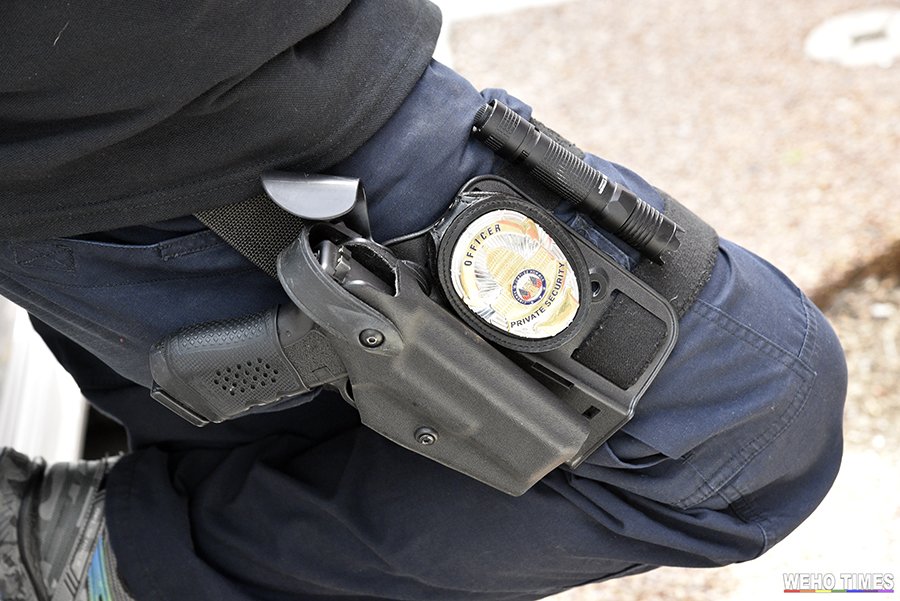 Tehranchi said that police officers did not say anything about the firearm strapped to his leg. “A police officer asked me, ‘are you armed? And I said, ‘yes.’ He said, ‘Good, because I wouldn’t allow you to be out here otherwise and left. They are pretty ‘laxed right now.”

A Mad Men sales associate said people were trying to break into the ATM machine inside. “They were using a golf club to try to break it,” he said. They were so stupid. We have to replenish that ATM machine several times a day because a lot of our customers use it, so if they had lifted it, they would have walked away with a couple of hundred dollars.

“West Hollywood should recognize that anything could happen at any time and this is a prime example of why we should be able to have armed guards,” Eric added “How are you supposed to protect your business? This is like a bank. Our security companies are labeled as bank security.This city has a lot of dispensaries and they’re going to add more. We’re like the cherry on top for these criminals. We got really lucky.”

Tehranchi said the plan was to have security in front of Med Men for 24-Hours until the protests die down. The plan is to board up the store and wait to see when it is safe to open for business.

Zen is open for business. So is The Artist Tree in West Hollywood, which is currently boarded up with a security guard standing outside.

Editor’s note: The City of West Hollywood’s Code Compliance Division would like to clarify that it is a municipal code operational requirement that security guards not possess firearms at cannabis businesses. If a cannabis business did have an armed security guard, the City would issue a notice to correct and the business could be subject to a citation if they fail to comply. However, this is separate from a person carrying a firearm in public, which would be handled by the Sheriff’s Department.

Paulo Murillohttps://wehotimes.com
Paulo Murillo is Editor in Chief and Publisher of WEHO TIMES. He brings over 20 years of experience as a columnist, reporter, and photo journalist. Murillo began his professional writing career as the author of “Love Ya, Mean It,” an irreverent and sometimes controversial West Hollywood lifestyle column for FAB! newspaper. His work has appeared in numerous print and online publications, which include the “Hot Topic” column in Frontiers magazine, where he covered breaking news and local events in West Hollywood. He can be reached at editor@wehotimes.com
RELATED ARTICLES
Cannabis