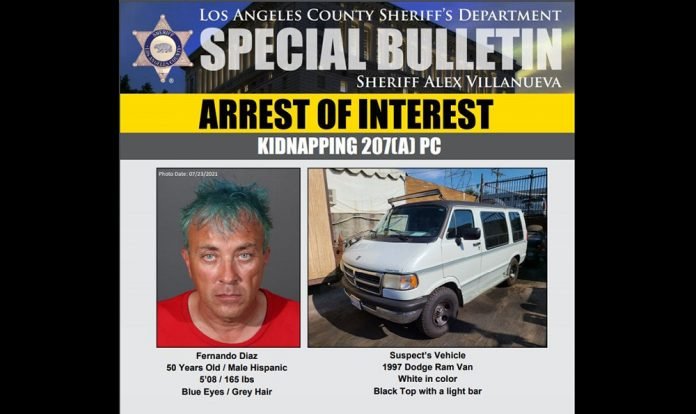 It’s the stuff of cinematic nightmares. A man was spotted carrying an unconscious woman into a white van in West Hollywood. He was arrested for kidnapping at Robertson Boulevard and Melrose Avenue after he was reported to a deputy sheriff who was nearby.

“In the early morning hours on July 23, 2021, West Hollywood Sheriff’s station deputies arrested Fernando Diaz for Kidnapping after he was seen carrying an unconscious woman to his van and driving away,” reads a special bulletin by the Los Angeles Sheriff’s Department. “The incident occurred in West Hollywood’s bar and nightclub area and detectives would like to speak with any additional witnesses or anybody that had contact with Diaz on the night of the incident or in the past under similar circumstances.”

The man under arrest is described as a 50 year-old male Hispanic with blue eyes and graying hair. He’s about 5’08 in height and 165 pounds.

The suspect’s vehicle is a 1997 Dodge Ram Van, white in color, with a black top and a light bar.

According to reports, a man pulled alongside Deputy Kevin Herrera’s patrol car at 2 a.m. on Melrose and Robertson, saying that he saw a male adult carrying a female adult into a white van. The deputy approached the van and the driver walked away. He found the woman inside the van completely intoxicated. She did not know who’s van she was in.

NBC Los Angeles reports the man behind bars is from Palmdale. His family claims it is all a misunderstanding. They say the alleged kidnapper medically transports disabled patients and was probably trying to help someone in need who was intoxicated.

The suspect is being held on $100,000 bail. The arrest comes after Pasadena police had recently had reports of a suspicious white van.