Man Arrested After Barricading Himself in a West Hollywood Home 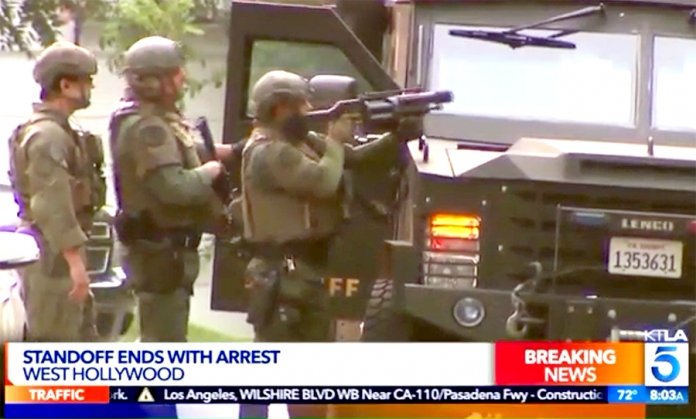 A West Hollywood neighborhood had a dramatic and sleepless Saturday night. A man believed to be armed, barged into an apartment on 8200 block of De Longpre Avenue. The resident of the home was not inside the the apartment during an eight-hour standoff.

Los Angeles County Sheriffs Department Information Bureau (SIB) reports: “At approximately 9:45 p.m., West Hollywood Station personnel responded to a ‘Disturbance’ call at the location. When deputies arrived the informant, who lives at the location, told deputies that he walked out of his apartment temporarily and left his door open and unlocked, when he returned his door was closed and locked. He believed someone was in his apartment and was refusing to come out.”

“We heard a loud screaming from a neighbor and he was yelling ‘can I get my dog out; can I at least get my dog,'” one witness told KTLA 5 news. “I ran outside to see what was going on and he was beating on his own door and he said a homeless guy had went into his apartment and barricaded himself inside.” “After several verbal attempts to persuade the suspect to surrender, SEB deputies introduced tear gas into the residence but the suspect continued to resist surrender,” SIB reports. “Early Sunday morning at approximately 7:15 a.m., SEB deputies made entry into the apartment and detained 36-year-old, Benjamin Owen Hales. The team continued to search the location for suspects and/or occupants with negative results.”

Hales was arrested and transported to West Hollywood Station where he was booked for Burglary and Vandalism and is being held in lieu of $55,000.

Anyone with information about this incident is encouraged to contact West Hollywood Sheriff’s Station at (310) 855-8850. If you prefer to provide information anonymously, you may call “Crime Stoppers” by dialing (800) 222-TIPS (8477), use your smartphone by downloading the “P3 Tips” Mobile APP, or “P3 Mobile” for the hearing impaired, on Google play or the App Store, or by using the website http://lacrimestoppers.org.