Madonna is Surprise Guest at amfAR Event in West Hollywood 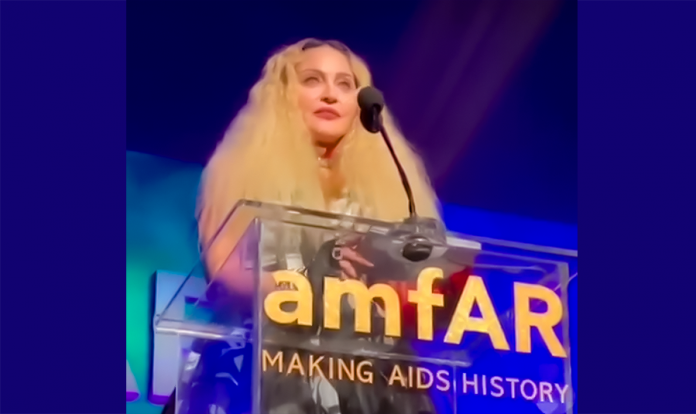 Madonna was in West Hollywood last night. It was announced earlier this week that a surprise special guest would present the Award of Courage to artist Jeremy Scott for his longstanding commitment to amfAR and the fight against AIDS. And that surprise special  guest was none other than Madonna. The event took place at the Pacific Design Center.

“I’d like to say they saved the best for last, but I’m really just f*cking late,” were her opening remarks from the podium.

An auctioneer announced that an autographed photo of Madonna would be auctioned off that night. Then to everyone’s surprise, Madonna walked on stage and gave a speech about the AIDS epidemic before she honored her friend, artist Jeremy Scott.

“For the past fourty years I have fought for and lost countless friends to the AIDS epidemic and I’m so relieved to see future generations of artists continue to raise awareness to help find a cure and support those currently living with AIDS,” she said in her speech. “Last year–this is important–last year a staggering 1.1 million people were infected with HIV. Can you imagine 160,000 of those people are under the age of 15? Think about it. We’re living in a pandemic right? And it’s very serious. Think about this pandemic. It’s still not over. Today, tens of millions continue to live with AIDS/HIV and require vital access to treatment in order to survive, yet millions are unable to receive access to basic treatment, which remains crucial to ending the AIDS epidemic as soon as possible. Can’t you see everyone? The fight is still not over. Can you see that? Can you see that? You’re not real. We can never be too complacent when it comes to this silent killer that continues to wreck people’s lives across the globe.”

She acknowledged Jeremy Scott for his fundraising efforts towards AIDS research and his countless work with organizations like Keith Haring Foundation, The Trevor Project, and of course amfAR.

According to reports, the autographed photograph sold for 70K.