The Los Angeles Times Endorses Lindsey Horvath for L.A. Board of Supervisors 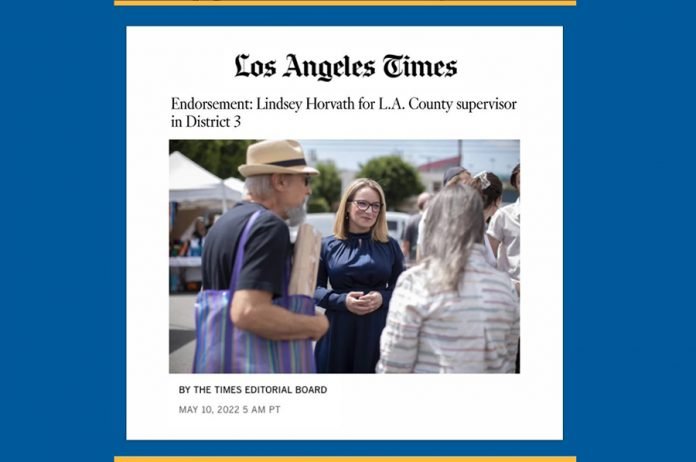 The Los Angeles Times Editorial Board announced it has given West Hollywood council member Lindsey Horvath their endorsement on her run for Los Angeles Board of Supervisors. Of the six candidates seeking Sheila Kuehl’s seat, The Times singles Horvath as “one particularly impressive leader likely to give the board a jolt of youthful energy and accelerate its sense of urgency.”

“Horvath has helped make her small city a laboratory for ideas and programs that promote opportunity, equity and justice for its residents, and she could do the same for the 2 million people who live in the redrawn 3rd District, and the more than 10 million countywide. The Times recommends a vote for Horvath,” reads the endorsement. “Horvath was only 26 when she was first appointed to the West Hollywood council to fill a vacancy in 2009. She once called the opportunity a “Willie Wonka Golden Ticket” to make a meaningful difference for people, especially the most vulnerable. She briefly appeared to have lost that ticket when she was unseated in her first election, but several years later she won back her place on the council and eventually served multiple stints as mayor including during the most challenging period for the city — and indeed the county and the nation — amid the pandemic lockdowns and social justice protests in the wake of the George Floyd murder in 2020 and into 2021.”

To read the endorsement in full, click on the link below:

The endorsement will come as no surprise to some West Hollywood residents who have criticized and questioned Harvath’s selection of Public Safety Commissioner Nika Soon-Shiong, a vocal critic of the Los Angeles Sheriffs and an advocate for alternative policing. Soon-Shiong is the daughter of biotech billionaire and the publisher of the Times, Dr. Patrick Soon-Shiong, who famously scooped up the paper in 2018 for $500 million.