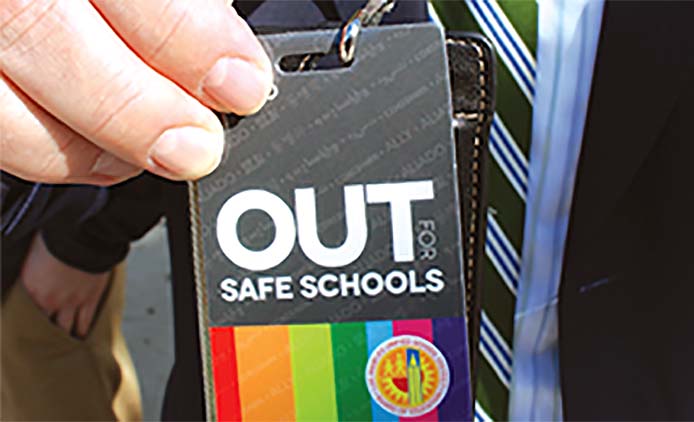 “We must stop Governor Ron DeSantis from signing Florida’s ‘Don’t Say Gay’ bill into law as this legislation seeks to further the oppression of the LGBTQ community. Prohibiting teachers from discussing within their classrooms the contributions LGBTQ people have made to our society and the homophobia and transphobia our community still experience will significantly contribute to the further isolation of LGBTQ young people. It is not lost on Floridians—and LGBTQ people everywhere—this bill attempts to make our community invisible in the same state that only six years ago experienced the largest massacre of LGBTQ people in history. Invisibility through censorship will not protect any student but will only create an environment where LGBTQ students are further demonized and physically and emotionally harassed.

The Los Angeles LGBT Center knows firsthand from our national OUT for Safe Schools campaign that LGBTQ youth who hear words of affirmation about their sexual orientations and gender identities from respected adults can help these young people avoid severe mental health conditions like depression, substance abuse, and suicide. Rather than restricting teachers from talking about LGBTQ identities, all public school personnel should receive training that ensures classrooms are free from all types of physical and emotional harassment, including anti-LGBTQ bullying.

Schools and teachers have been under attack as of late by legislatures. Whether it is a bill like ‘Don’t Say Gay’ or weaponized discussions on race, classrooms have become where the war on culture is occurring and, unfortunately, the victims of these battles are our nation’s children. This year alone, there have been hundreds of pieces of anti-LGBTQ legislation introduced across the country, a reminder for LGBTQ people and allies everywhere that we must remain vigilant in our fight for equality. Alabama, Arizona, and New Hampshire want to criminalize gender-affirming care for trans and non-binary youth. New Hampshire wants to force trans people into school bathrooms and jail cells based on a designation on their birth certificates regardless of their identity.

I am glad to see Texas has been stopped from investigating parents of children seeking or receiving gender affirming-care as child abusers, but this policy must be struck from the books and the people who enacted it voted out of office. With national mid-term elections later this year and a presidential election in 2024, the stakes are high—we know homegrown hate towards LGBTQ people can have national impact. Now is the time to act.”

The center is asking its supporters to join them in sending a message to Governor DeSantis to oppose Florida’s “Don’t Say Gay” bill and to stop anti-LGBTQ legislation nationwide! Visit lalgbtcenter.org/resist.

For more information on OUT for Safe Schools, visit lalgbtcenter.org/OFSS

The word “gay” does not appear in the parental rights bill. It has nothing to do with LGBT content specifically; it’s about protecting young children (preschool to 3rd grade) from ALL inappropriate sexual content and gender theory instruction. It is the sole right of the parents to discuss those topics.