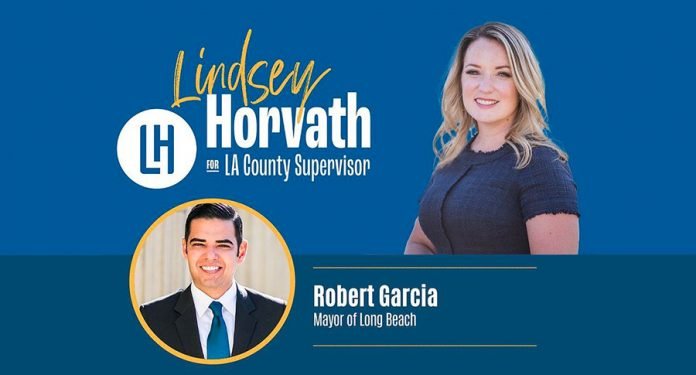 “I have had a front row seat to Mayor Lindsey Horvath’s leadership here in Los Angeles County and it is second to none,” said Long Beach Mayor Robert Garcia. “On issues important to every community in Los Angeles, Mayor Horvath has been a leader. From her quick response to Covid-19 to her compassionate programs put in place for our un-housed residents, she is ready to lead our county. Supervisor Sheila Kuehl has been a great leader in the region for years, and only Mayor Horvath has the capacity to take that leadership baton and work to make Los Angeles County a better place for all.”

“I am honored and thrilled to have Mayor Garcia’s support,” said Mayor Lindsey Horvath in response to his endorsement. “His record of service in Long Beach has been impeccable, and his strength and courage in this challenging time are unparalleled. He has truly exemplified how to be thoughtful, creative, and work with a sense of urgency to get things done.”

Los Angeles County Supervisor Sheila Kuehl, who currently represents Supervisorial District 3, also announced her support for Horvath shortly after the Mayor announced her candidacy. “Mayor Lindsey Horvath has demonstrated her inclusive leadership time and time again,” said Supervisor Kuehl. “She is uniquely qualified to serve as County Supervisor. From reducing homelessness to getting folks back to work, from protecting public health to improving our transportation grid, there is no one I would want to continue the work our team has done more than Mayor Lindsey Horvath. She is the best choice to become our next Los Angeles County Supervisor for District 3.”

Mayor Horvath was elected to the West Hollywood City Council in 2015, and previously served from 2009 to 2011. Horvath serves as a leader of West Hollywood and a regional leader in a number of roles, including: President of the California Contract Cities Association (CCCA); Board Member for CalCities (formerly the League of California Cities); Board Member for the National League of Cities (NLC); Immediate Past President of Women in Municipal Government (WIMG) for the National League of Cities; and Executive Committee Member and Legislative & Regulatory Chair for Clean Power Alliance of Southern California.

I am sorry to hear that Sheila Kuehl and Robert Garcia have not waited to see who all is running for Supervisor. Richard Bloom – who announced is intention to run this morning – has been my Assembly represent for years and is effective and conscientious in his work. I will be voting for him. Dare I say, he writes legislation and sits on committees working on my behalf for a better community. There’s not one Drew Barrymore Day or disparaging remark about his fellow legislators; quite unlike the Weho City Council under the leadership of Lindsey Horvath.