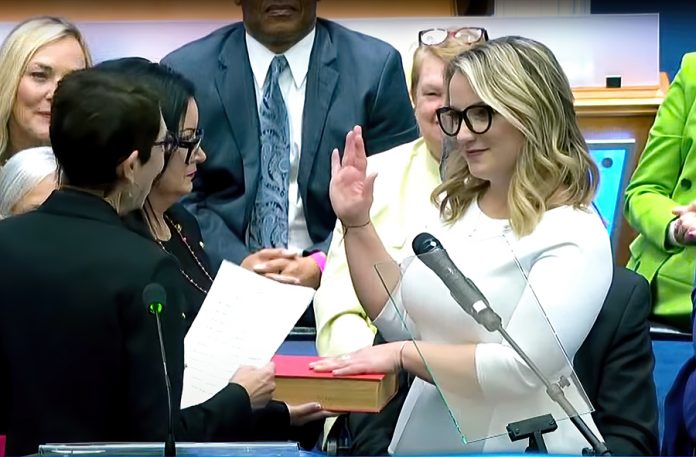 “It is with great honor and humility that I accept this call to serve as Supervisor for LA County Third District, with a clear understanding that more must be done,” said Los Angeles County Supervisor Lindsey P Horvath, during her swearing in ceremony for Third District Supervisor on Monday, December, 5, 2022, at the Kenneth Hahn Hall of Administration. “I would not be here today without the support of my family, my friends, my colleagues, and my allies. Thank you for believing in me, and for believing in this moment. This seat does not belong to me, it belongs to the people of the Third District. As the Board’s 166th member and 8th woman, I join them all in writing the next great chapter of history for Los Angeles County.”

The new County Supervisor was sworn in by former West Hollywood council member and mayor Abbe Land who administered the oath of office in the Board chambers among County officials and close family and friends of the new Supervisor.

Supervisor Horvath served the West Hollywood City Council is the longest consecutively serving Mayor for the City of West Hollywood. She is the youngest woman to ever be elected to the Los Angeles County Board of Supervisors and the first millennial and only renter to serve on the historic all-female Board.

To view the entire swearing in ceremony of Lindsey P Horvath, visit the Los Angeles County – Board of Supervisors official YouTube page:

Supervisor Horvath has replaced Sheila Kuehl, 81, who has retired from the board after eight years. Horvath will represents the newly drawn Third District stretching from the Westside of Los Angeles into most of the San Fernando Valley, the Conejo Valley, the Santa Monica Mountains all the way to the Ventura County line, with the northern border including Chatsworth and Porter Ranch.

Later in the evening, Supervisor Horvath attended the Regular West Hollywood City Council meeting where she was given a final farewell by city staff, her former colleagues and members of the community.