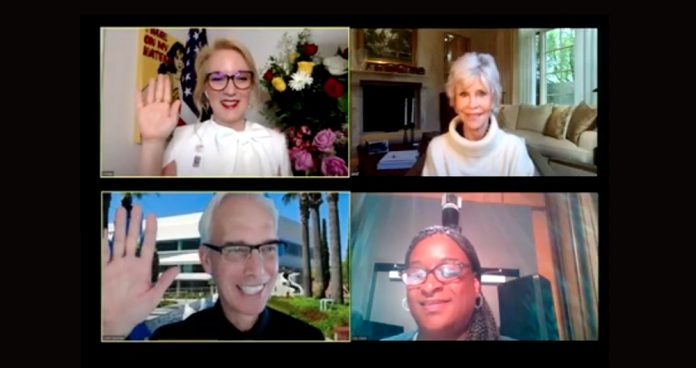 Lindsey P Horvath was sworn in as the New Mayor Mayor of the City of West Hollywood and John Heilman was sworn in as the Mayor Pro-Tempore at an Oath of Office ceremony during the City of West Hollywood’s annual City Council Reorganization and Installation meeting, on Monday, May 18, 2020. The meeting was a virtual teleconference format to adhere to the Los Angeles County Safer at Home order to slow down the spread of COVID-19.

Feminist, environmental activist and Academy Award-winning actress, Jane Fonda administered the Oath of Office to Mayor Harvath and City Clerk Yvonne Quarker swore-in Mayor Pro-Tempore Heilman. Both swear-ins were brief. There was a comical moment when Jane Fonda accidentally said, “I solemnly square,” instead of “swear” during the oath. And the delay during Heilman’s swear-in had him laughing at one point.

“I sincerely wish I was with you in person, but I want to offer my warmest congratulations to Linsey Harvath and John Heilman as they begin their terms as Mayor and Mayor Pro Tem for the City of West Hollywood,” Buttigieg said via Zoom. “It won’t come as a surprise to hear me say this, but I believe that local leaders, especially mayors have never been more important. At a time of so much uncertainty and pain, your work is going to be vital throughout this pandemic and the recovery efforts that are going to last for months and years to come. Even before this emergency, America was suffering from a need for greater leadership and a crisis of belonging where far too many people across the country and in our communities didn’t have a sense that they were included in the future. The work that you are doing in West Hollywood can and should serve as a model for building a more hopeful and inclusive society for Americans of every background.”

The regularly scheduled City Council meeting followed the installation, and a live DJ set by DJ Asha concluded the evening.

Mayor Lindsey P. Horvath was elected to the West Hollywood City Council on March 3, 2015. She previously served as a Councilmember for two years from 2009 to 2011. Mayor Horvath has a long history of civic and social justice advocacy. She has spearheaded policies to make West Hollywood an “Age-Friendly Community” to better serve residents of all ages. She also led the City to become the first in the nation to impose financial sanctions on the State of Arizona for its discriminatory, anti-immigration SB-1070 law. Mayor Horvath created the first-ever West Hollywood Community Response Team to Domestic Violence. Mayor Horvath is widely known for her leadership on women’s issues and has served as a Global Coordinator for One Billion Rising, a global campaign of the V-Day movement to end violence against women and girls. She is also a champion of LGBTQ rights. Additionally, she served as a Board member of the Victory Fund and a founding Board member of the NOH8 Campaign. In 2009, she represented the City of West Hollywood in the National Equality March in Washington DC. This year, Mayor Horvath will also serve as the President of the California Contract Cities Association, and as the President of the National League of Cities Women in Municipal Government constituency group. Read more about Mayor Horvath here: https://www.weho.org/city-government/city-council/councilmembers/mayor-pro-tempore-lindsey-p-horvath.