Home Health LGBTs in the News to Host ‘To PrEP or Not to PrEP’... 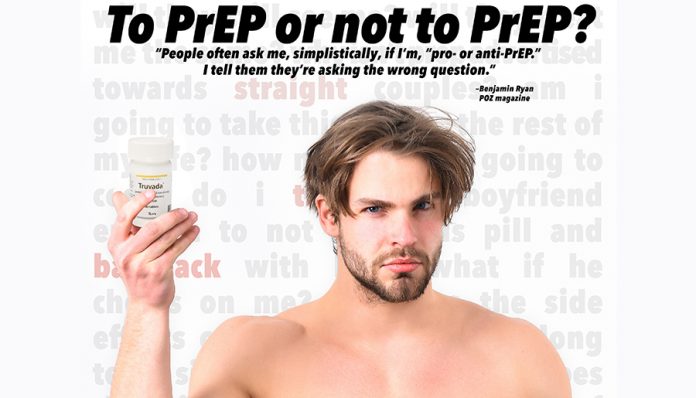 This Saturday, September 22nd, top journalists, clinicians and community organizers will gather for LGBTs In The News’ upcoming panel in San Diego, “To PrEP or Not to PrEP”, a deep dive into the facts, unknowns and promises of the HIV-preventive pill.

Nearly six years since its introduction more people than ever are asking if, how and when they should take Gilead Sciences’ prescription-only, once-a-day prophylaxis, which is reportedly more than 99 percent effective at preventing new HIV infections.

LGBTs In The News has been touring the country since 2013, to become America’s best-known LGBTQ live-discussion panel series. It has gathered a group of journalists, community organizers, activists and a physician with unique insights and expertise about PrEP, presenting a live discussion before an in-person and online audience Saturday, September 22 at 2 p.m. at Urban Mo’s in the heart of San Diego’s LGBT Hillcrest neighborhood. 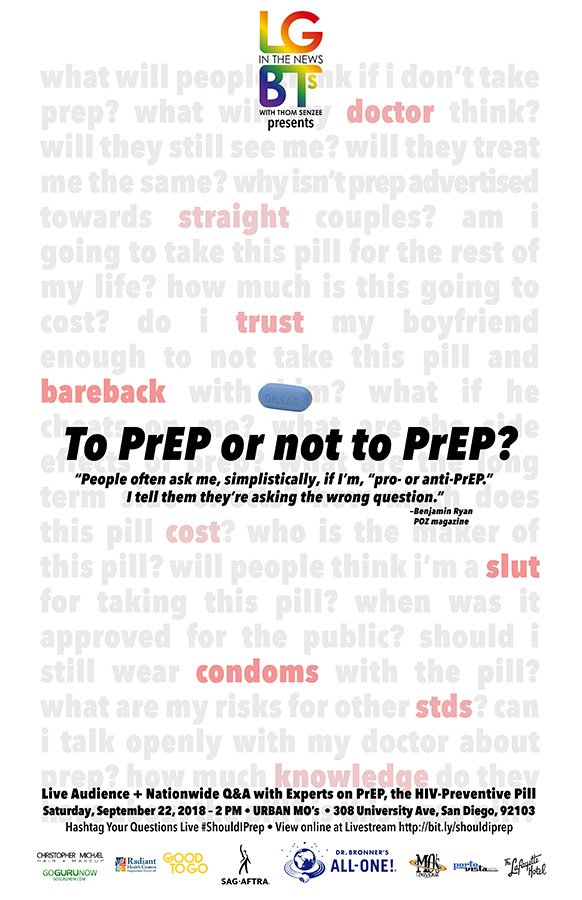 “I’m excited because there’s so much to learn and share among the audience and a panel made up of some of the world’s most interesting people who know the PrEP issue from expert perspectives that vary greatly,” says Thom Senzee, founder and moderator of LGBTs In The News.

“We have confirmed as our headliner, Benjamin Ryan, the world’s most prolific journalist reporting on PrEP, plus one of the country’s most engaged doctors, UCSD’s Susan Little, M.D., who has significant expertise on the HIV prophylaxis, as well as Timothy Ray Brown, “the Berlin Patient”—the only HIV patient ever to be recognized as cured of HIV. We’re also thrilled to have Blossom Brown, a noted PrEP navigator with affiliations that include the Los Angeles LGBT Center and the Kaiser Family Foundation, joining us. Of course we’re also lucky to have Lukas Volk, who, as an LGBTQ community organizer, has been called “the glue that holds Hillcrest together.”

Senzee adds that the Sept. 22 engagement, which is free to attend, will feature a casual atmosphere, approachable experts and major audience engagement.

“While our experts are intellectual heavyweights who are passionate and supremely informed about PrEP, they’re also nice folks who are highly approachable and engaging,” Senzee continues. “This is LGBTs In The News first panel on PrEP. We know there will be a lot of questions, so this event will predominately be a Q&A format.”

Headlining panelist and POZ Magazine editor at large, Benjamin Ryan, who is traveling from New York City to San Diego in order lead the conversation, says his job is to be objective about the landmark medication, which he’s been reporting about for more than half a decade.

“I take something of an agnostic view, looking for data-driven facts over any kind of an activist agenda,” says Ryan. “It is not my job to promote PrEP, but to advance an up-to-date understanding of the science behind PrEP. That’s not just the science about how it works for the individual, but research about how it is winding its way into the health care system and how it works on a public-health level. People often ask me, simplistically, if I’m, ‘pro- or anti-PrEP.’ I tell them they’re asking the wrong question.”

Livestream at bit.ly/shouldiprep. In-person attendees should RSVP with their names and number of guests to info@lgbtsinthenews.com.