It has been estimated that 25,000 to 30,000 people marched from Hollywood to West Hollywood for the All Black Lives Matter March on Sunday, June 14, 2020. The march, which was organized by an all black leadership board, was in protest of police violence against the black community, with a focus on violence against the black LGBTQ community, especially black trans individuals who are murdered at a disproportionate rate. 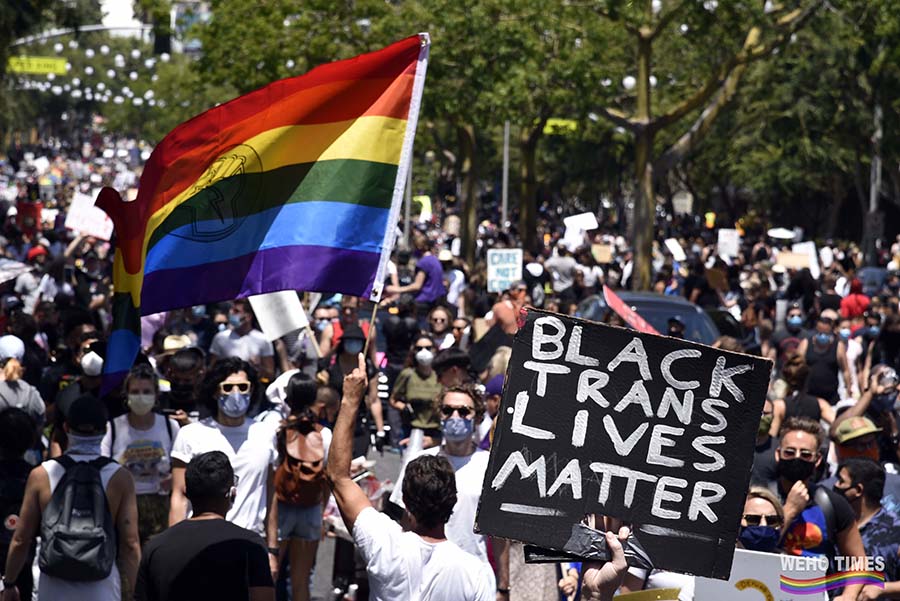 Human Rights Campaign (HRC) reports that at least 14 transgender or gender non-conforming people were fatally shot or killed by other violent means this year–the majority being black, and not counting the deaths that go unreported or misreported. Two murders are as recent at this month on June 9, when Dominique “Rem’mie” Fells, a Black transgender woman was killed in Philadelphia, Pennsyania, and Riah Milton, a 25-year-old Black transgender woman, was killed in Liberty Township, Ohio.

The All Black Lives Matter march began at Hollywood Boulevard and Highland Avenue and ended at the intersection of Santa Monica Boulevard and San Vicente Boulevard. It was moved from 10am to 11am in recognition of trans man Tony McDade, who was shot and killed by police officers at 11am on May 27, 2020. 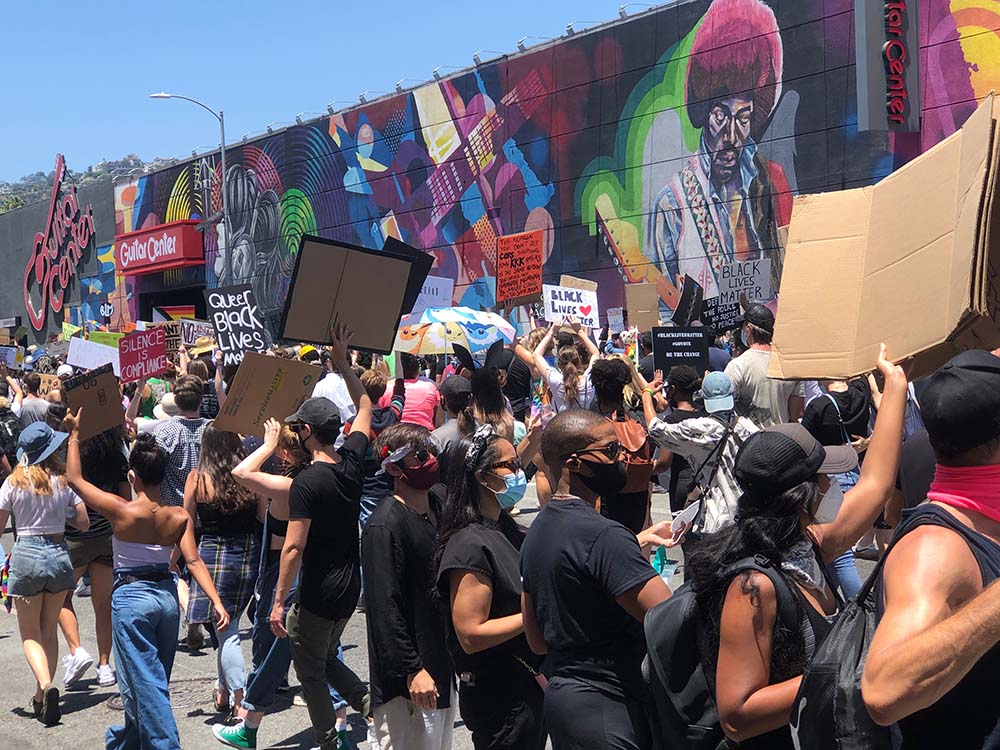 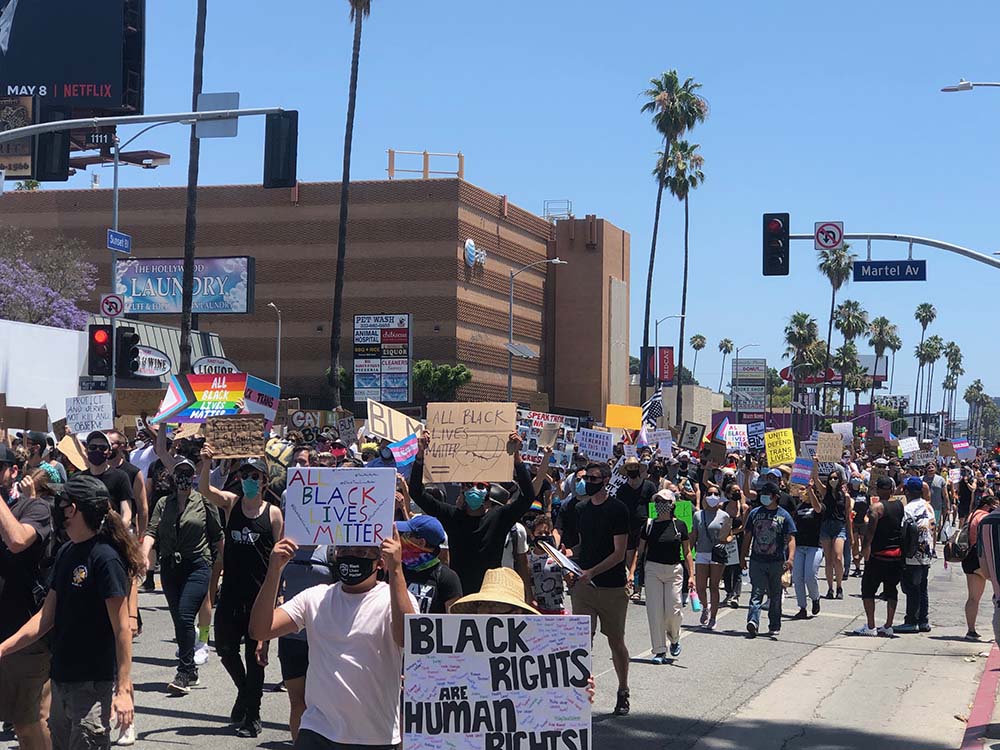 The first wave of people participating in the protests reached the intersection of La Cienega Boulevard and Santa Monica Boulevard at 1pm. The protestors who took leadership roles in front of the march stopped at the La Cienega Boulevard intersection to assess the traffic and allow marchers to catch up. Individuals directed traffic on both sides and made sure traffic was at a complete stop before allowing marchers to continue walking. A man in a bullhorn yelled at everyone to march behind the motorcycles so that no one was injured. The event was well organized without the aid of police officers. 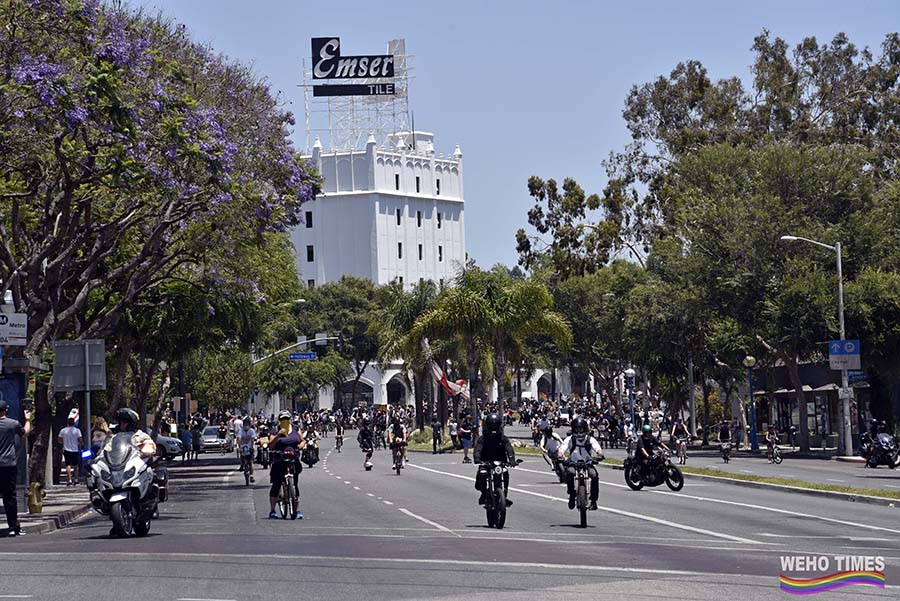 The sea of people poured into WeHo’s LGBT Rainbow district yelling familiar chants similar to previous protests that have come through West Hollywood— “No justice! No peace! No Racist Police,” “Trans lives, they matter here” and the names of of George Floyd, Breonna Taylor and other individuals who lost their lives at the hands of police were chanted as well.

The protestors stopped at the newly installed transgender flag mural that was freshly painted the night before between the two rainbow crosswalks at San Vicente and Santa Monica Boulevard. The crowd spilled into both sides of San Vicente Boulevard and some marchers walked up to Sunset Boulevard to head back to Hollywood. The majority of the marchers stayed in WeHo’s historical Boystown and the protest turned into a celebration of sorts.

Police officers were not in riot gear or heavily armed at the All Black Lives Matter March. Police presence was at a minimum compared to the previous protests earlier this month when West Hollywood Sheriff’s deputies blocked intersections while heavily armed for battle to protect the West Hollywood Sheriff’s station. The heavily armed officers that previously stood at the rooftop of Rocco’s restaurant and bar were replaced by three random individuals, one of them fanning himself with a rainbow clap fan.

The Sheriff’s Department was criticized for making the situation worst with the aggressive-looking police presence. Captain Ramirez said in a statement that they believed the Sheriff’s Station was a target from looters who were posing as protestors.

The giant construction dumpsters that previously blocked traffic from entering certain parts of the city were moved to the side. West Hollywood roadblocks were put in place to divert traffic.

The flood of protestors holding signs and chanting kept pouring into WeHo well past 4pm. Vehicles also made it into the Boulevard, giving the demonstration a parade feel with protestors hanging out of car windows, riding on the hoods of cars and in the back of trucks. Music blared from all direction with people dancing on the street. People had their own pride festival and their own pride parade which was commercial-free. It turned into a street party well into the early evening. 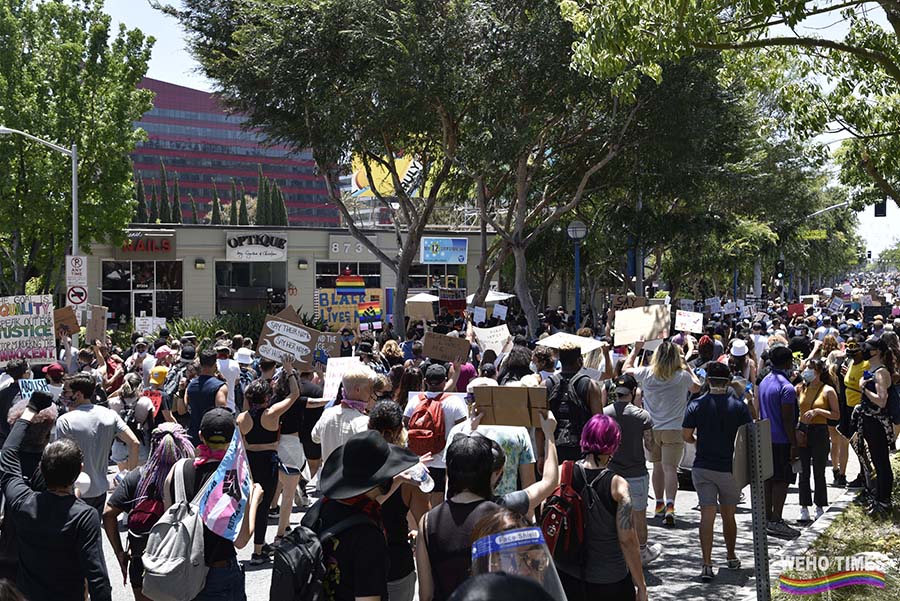 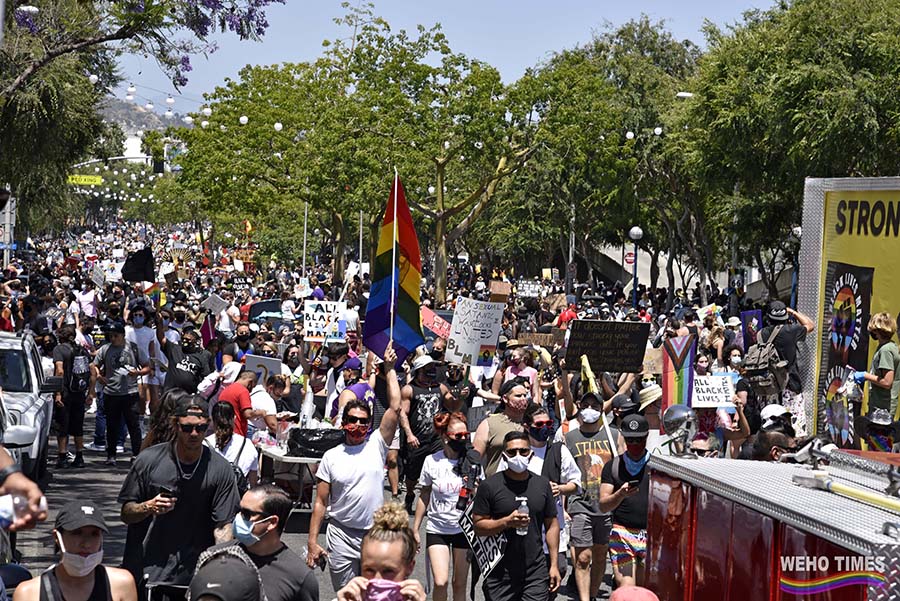 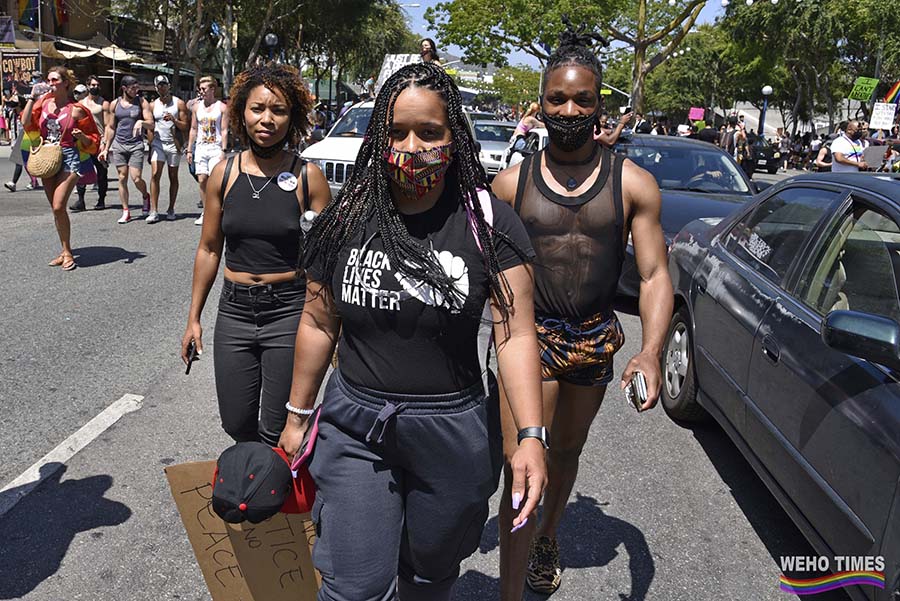 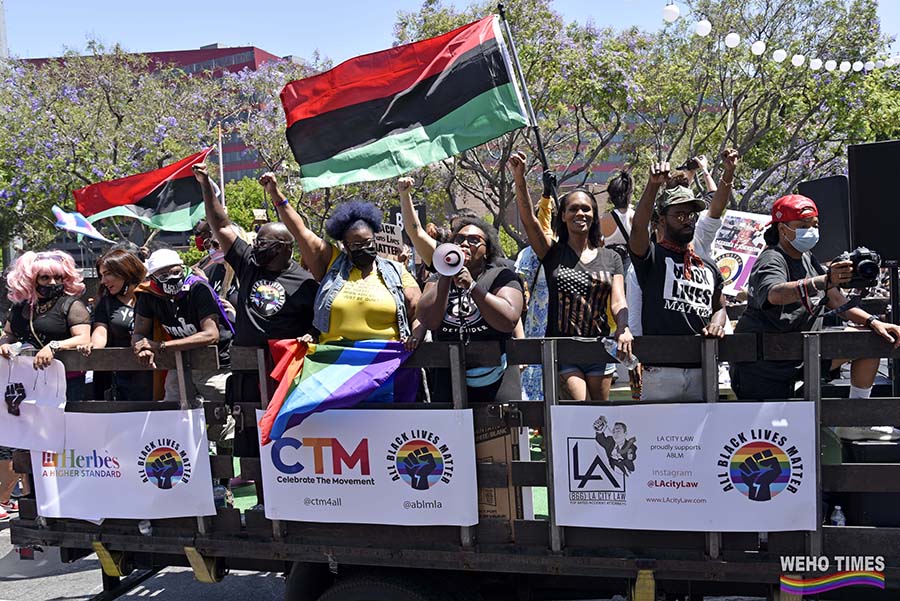 The event was festive, it was peaceful and for the most part, people adhered to wearing face coverings. Social distancing was nearly impossible, but there was a sense of community. Strangers helped strangers with plenty of free water being passed around. There were free snacks, and participants even offered squirts of hand sanitizers, which was a reminder that we are still in the thick of a pandemic.

Christopher Street West (SCW) the organization that organizes LA Pride announced they were planning a Solidarity march with Black Lives Matter Los Angeles on June 3. The march would take the place of the LA Pride parade. However, missteps from CSW would result in controversy. They were criticized for inviting the community to gather during a pandemic and Black Lives Matter Los Angeles some black leadership took to social media to call out the organization for not engaging them in the planning of the march. The black community also had issue with CSW requesting a permit and asking for police presence, while people were on the street protesting and calling to defund the police.

The CSW board apologized for the missteps taken and announced that they were pulling away from the Solidarity March. They turned the event over to an Advisory Board, made up of all Black LGBTQ+ leaders who announced they were organizing the All Black Lives Matter solidarity march on Sunday, June 14, 2020, in Los Angeles.

However, the people marched anyway. It was a huge turnout. The idea that people can organize their own march, celebrate pride, bring awareness to injustice, feel a sense of unity and then dance on the streets, could change the landscape of LA Pride events for years to come. 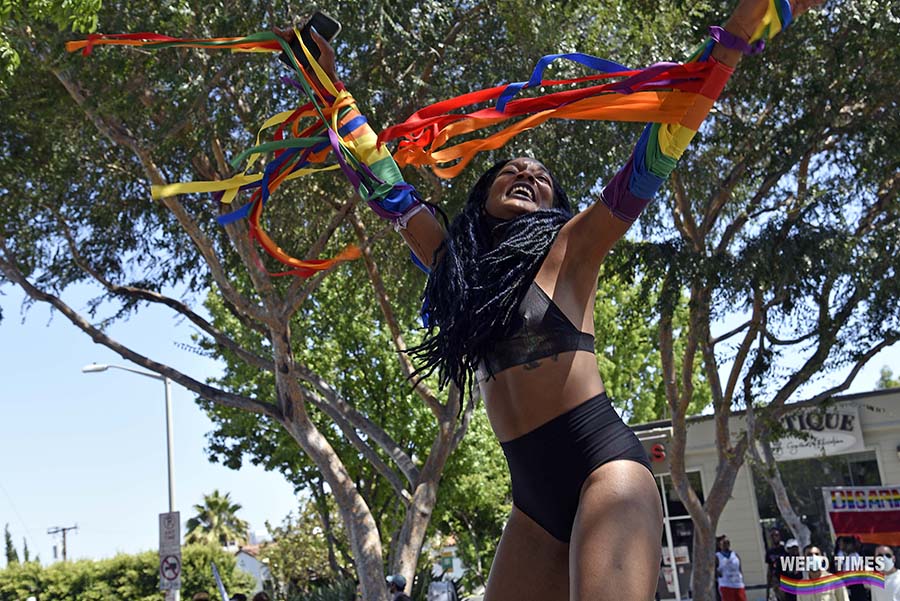 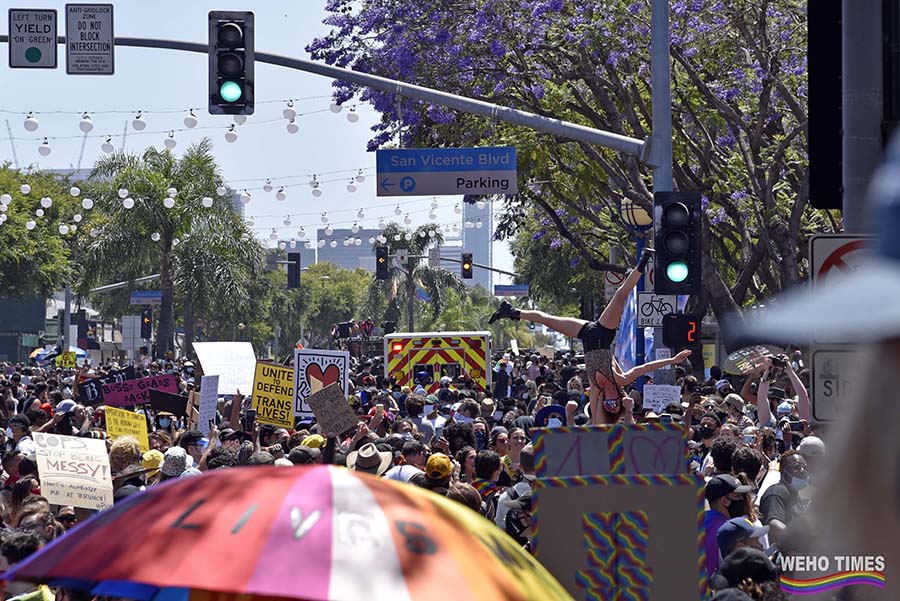 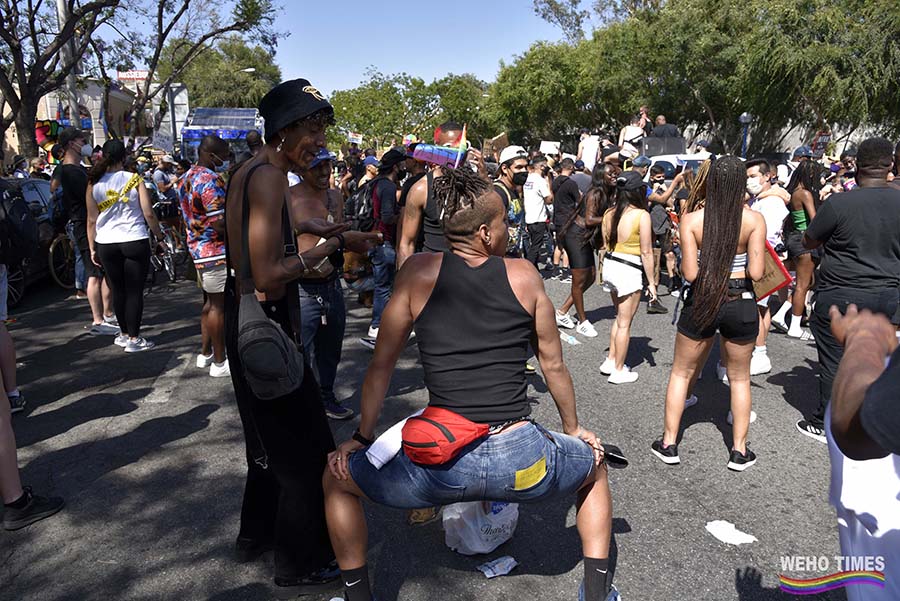 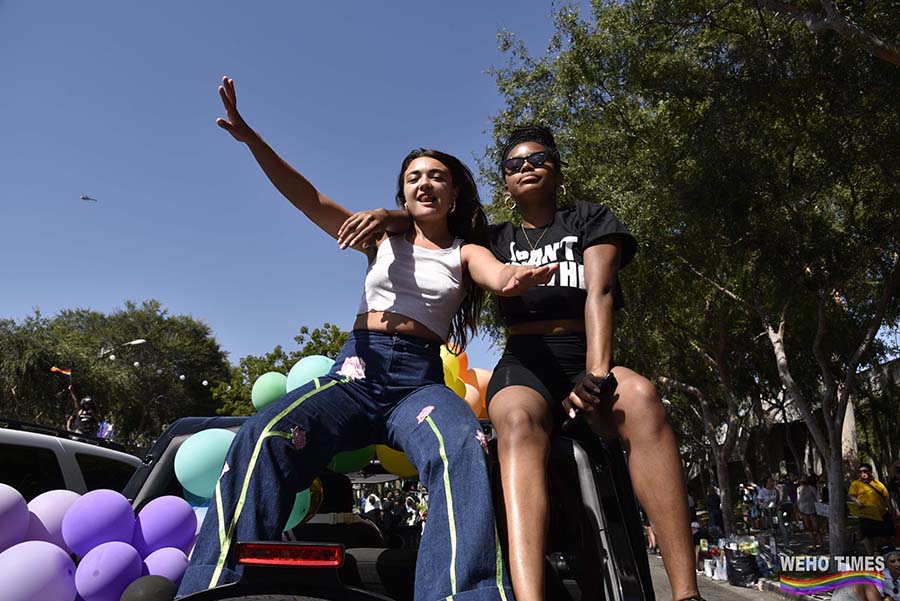 To see more of our exclusive photos from the All Black Lives Matter March, visit our Facebook page here.