2021 WEHO Arts Performance Grant recipient Leopold Nunan, “The Leo From Rio Sound Machine”, invited his musical friends and guests to perform with him at a high energy interactive pop-up dance concert at West Hollywood Park this past Sunday, September 26, 2021.

Although the overall production was minimalist and clearly on a budget, Nunan pulled all the stops to bring his personal best to the Main Lawn at WeHo park. The performance area may have been small, but Nunnan was larger than life. He did not stop dancing and singing and interacting with the audience for over two hours.

A newly bleach blond Leopold Nunan stepped onto the red carpet area for a pre-show meet and greet. The look was outrageous. He was covered in colorful balloons, a brightly-colored zebra print track suit, a carnival style rainbow carnival feathered headpiece, and rhinestones and glitter adorned his face. He pulled random people from the crowd to take photos with him at the red carpet area. 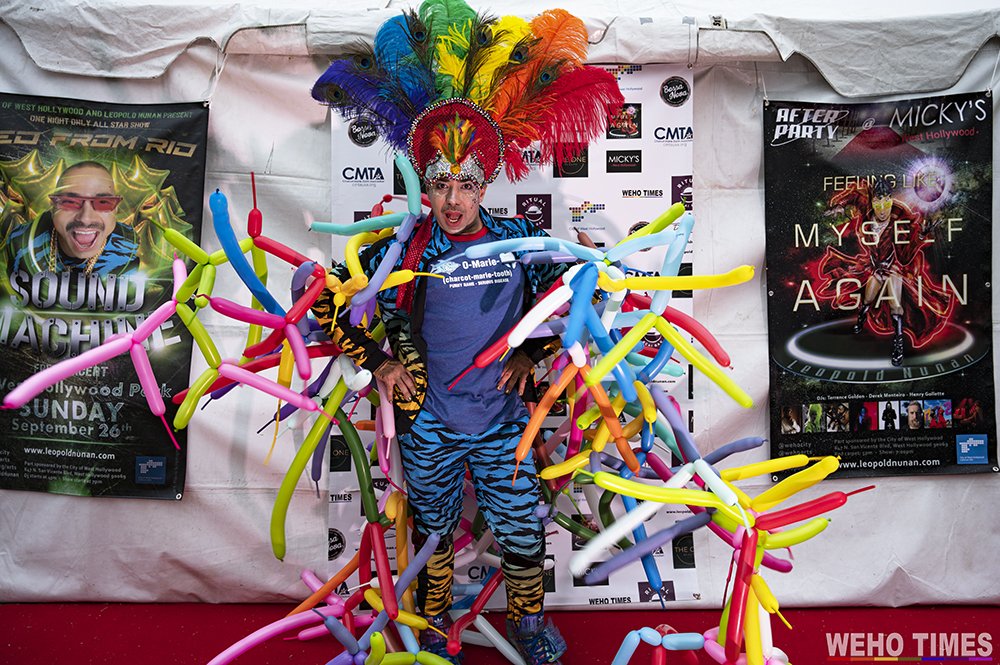 He also made the best of his staging area which consisted of a dance floor with the DJ booth setup and the giant rainbow balloon arch. Those who gathered that night were on notice that what they were about to experience was sheer queer showmanship.

His entrance to the actual concert was too many things. He pulled up to the lawn in a yellow DeTomaso Pantera Classic (I had to look that up). He danced and sang his way to the main floor where he was joined by three backup singers. 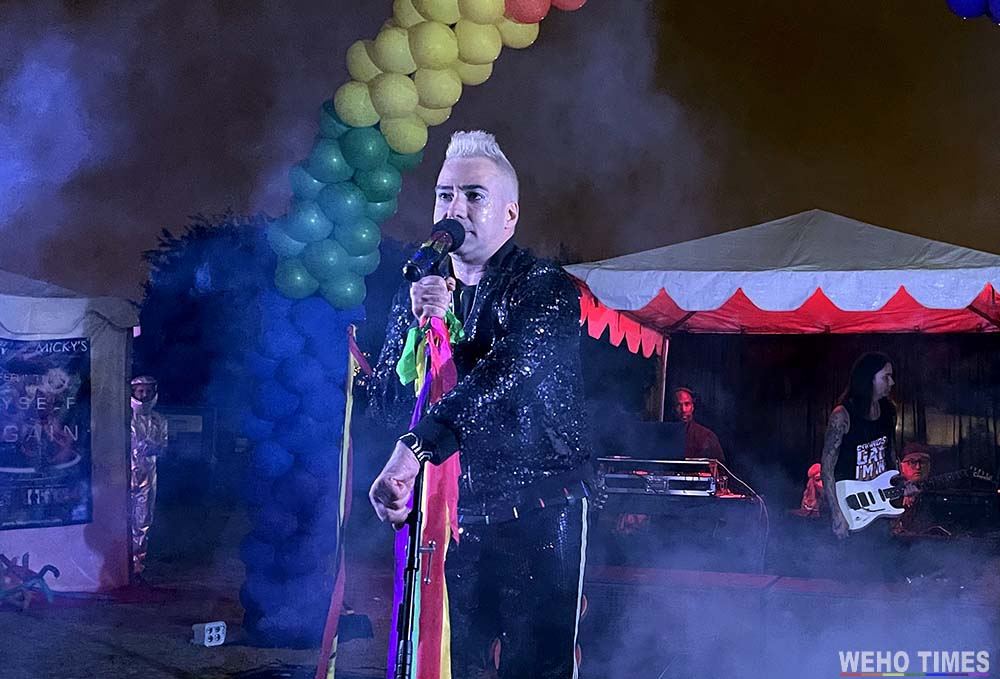 He premiered his new song “Feeling Like Myself Again” at the show (we would get the disco version as the closing number). The song is catchy. It’s about getting out of a suffocating relationship that suppresses you from being yourself and starting anew–a timely piece for a lot of us who are coming out of a dysfunctional relationship with COVID-19 and have not been ourselves for almost a year and a half of restrictions and isolation.

Seriously, those of you who were too lazy to show up to West Hollywood park Sunday night, missed out on some high energy entertainment. Everything about Leo was loud and attention-grabbing, but he was not afraid to share some of that attention with his musical friends who he clearly respects and enjoys (everyone was introduced as a legend).

The show featured costume changes, dancers, Brazilian beats, queer spoken word, drag queens, electric guitar, and the DJ kept everyone bouncing through the night. It also included some far out moments (one of my favorites was watching Delia Rawdon come out as a sexy futuristic robot and busting out some sensual moves using her LED buugeng s-staffs to a slower beat).

Leopold Nunan is a showman vocalist, recording artist and performer originally from Brazil. Throughout his career in West Hollywood and Los Angeles, he has performed at hundreds of venues alongside artists from all walks of life. His sound mixes disco, electronic and funk and flirts with global bass, Afro beats, Brazilian favela funk and Brazilian pop.

To listen to Feeling Like Myself Again, click here:
https://soundcloud.com/leopold-nunan/feeling-like-myself-lucio-k-disco-remix-video-edit
The next WeHo Arts performance at WeHo Park will be Alx Luke presented by Leggy Riggs, on Saturday, October 16th, at 4pm and 6pm. Alx Luke is a West Hollywood resident, dance-pop singer/songwriter, and a cirque aerial performer. There will be two free performances of original songs with the circus cabaret Leggy Riggs. These performances are supported in part by an arts grant from the City of West Hollywood.
5 4 votes
Article Rating
Share
Facebook
Twitter
Email
Copy URL
Previous article
House of Horrors is Coming to the Amazon Pop-Up Store in WeHo
Next article
READING IS FUNDAMENTAL! New Little Free Library Opens in WeHo