Lesbians and Allies Unite for Unofficial Dyke March in WeHo 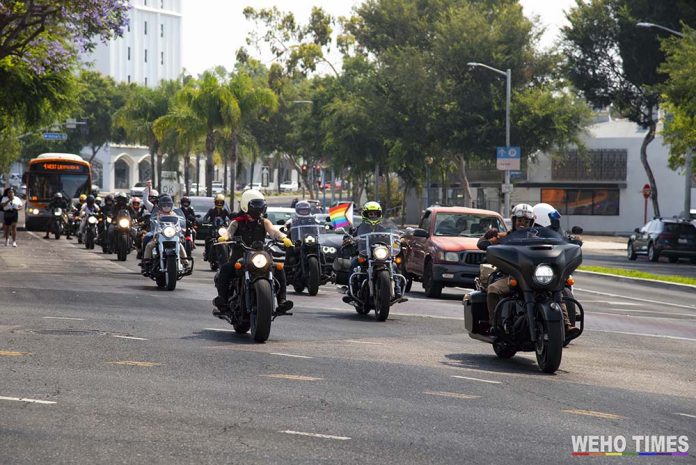 Lesbians and their allies gathered at the Sal Guarriello Veterans’ Memorial for an unofficial Dyke March and protest for equality event on Saturday, June 19, 2020. The march was updated to a protest against the United States Supreme Court’s unanimous ruling in Fulton v. City of Philadelphia, where a Catholic agency can now discriminate against potential LGBT foster parents. 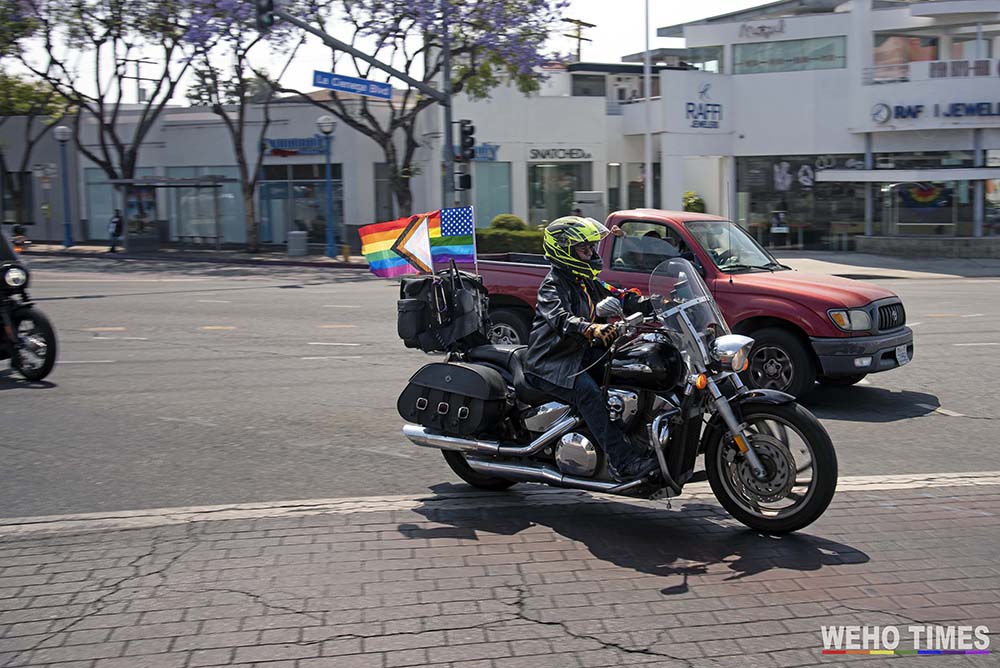 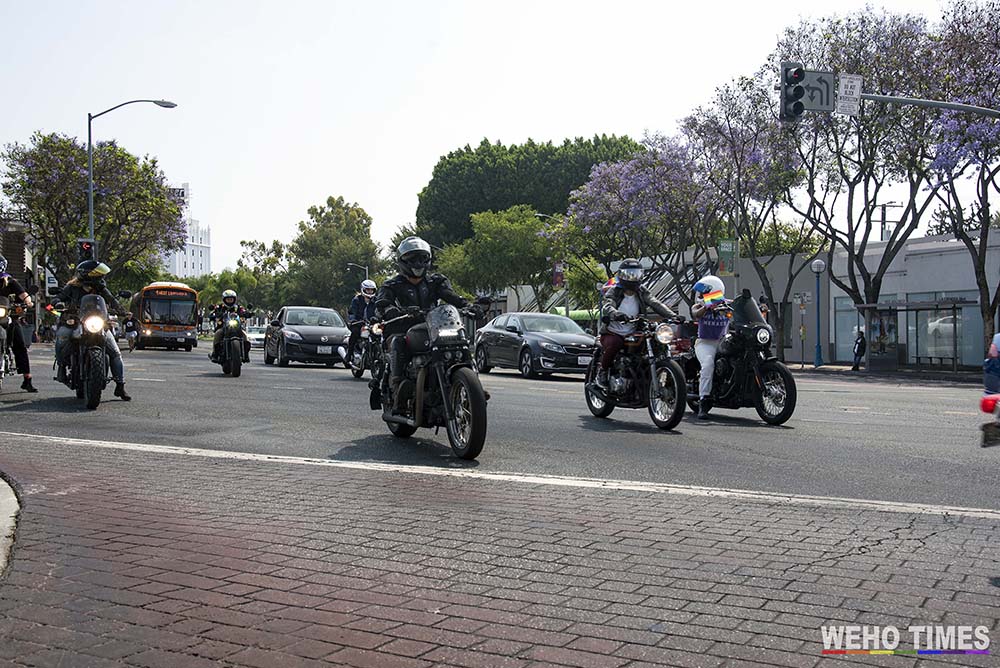 The unofficial Dyke March had the support of some West Hollywood officials. Mayor Lindsey Horvath, Mayor Pro-Tempore Lauren Meister, and Council Members John Erickson, and Sepi Shyne were at the event to show their support to the LGBTQ+ community.

Council member Shyne presented lesbian activists Marna Deitch with a Proclamation for her work on the SoCali Motorcycle Contingent for Equality (Deitch was honored with the Melissa Etheridge Award at the Dyke March in 2019).

“Thank you for being you and thank you for being out and proud,” Mayor Horvath told the crowd. “We celebrate pride in West Hollywood, not just this month, but 365 days a year. That is who we are in the community. It takes all of us to uphold that each and every day, and sometimes the work is tiring, especially when we get rulings like we heard earlier this week that stand against everything we stand for. It’s exhausting to continue to have to fight just to be who we are and love who we are, and to create families the way we want to create families. It’s exhausting, but we continue to fight, not just for us, for the generations to come. We will fight against that ruling and we will continue to push for equality everywhere in this country. That’s why we are gathered here today.”

Mayor Pro-Tempore Lauren Meister pointed out that Pride is not pride without the Dyke March. She also took a moment to acknowledge Juneteenth, which was being recognize that day. She pointed out in her speech that everyone needs to be more than just allies, we need to be anti racist on a daily basis.

The unofficial Dyke March and ride began on schedule at 10:15 a.m. It moved west towards Rocco’s WeHo where protestors gathered for a viewing of The Women’s Freedom Festival sponsored by the the L-Project Los Angeles in partnership with the City of West Hollywood. 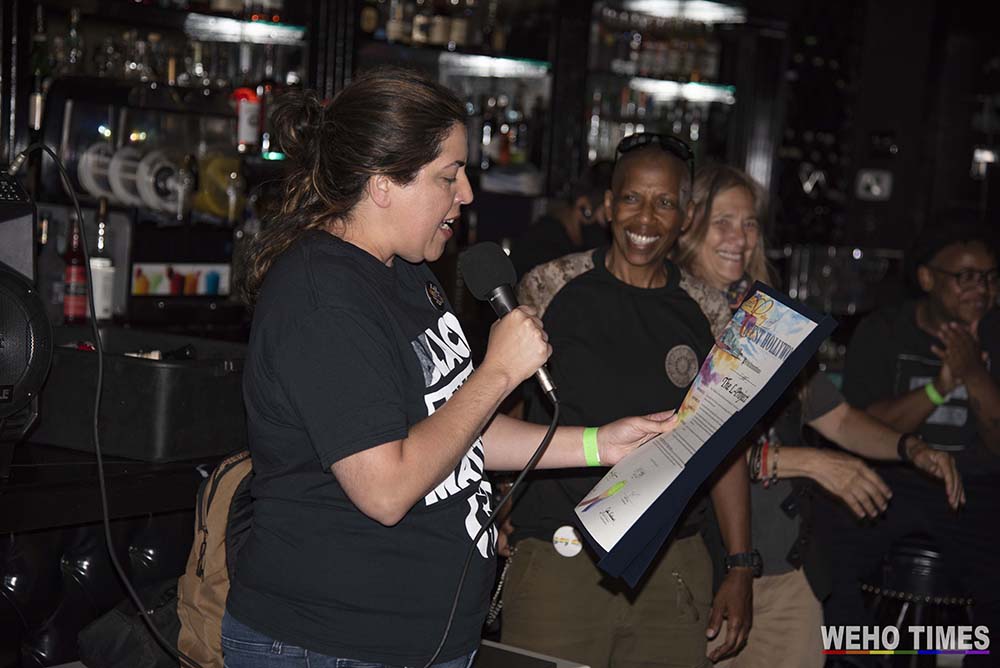 At Rocco’s, council member Sepi Shyne presented Chris Jackson-Baldwin, The L-Project LA’s Founding President, and Women’s Freedom Festival creator, and The L-Project LA’s Vice President and co-Producer of Women’s Freedom Festival, Madonna Cacciatore, with a proclamation for the the L-Project—a historically lesbian non-profit that produces multi-cultural LGBTQIA+ events. The City of West Hollywood acknowledged the L-Project for their continued commitment to uplifting the voices of the of LGBTQIA+, BIPOC, and non-binary women. The L-Project LA is a 501c3 non-profit organization. All donations they receive are tax deductible. 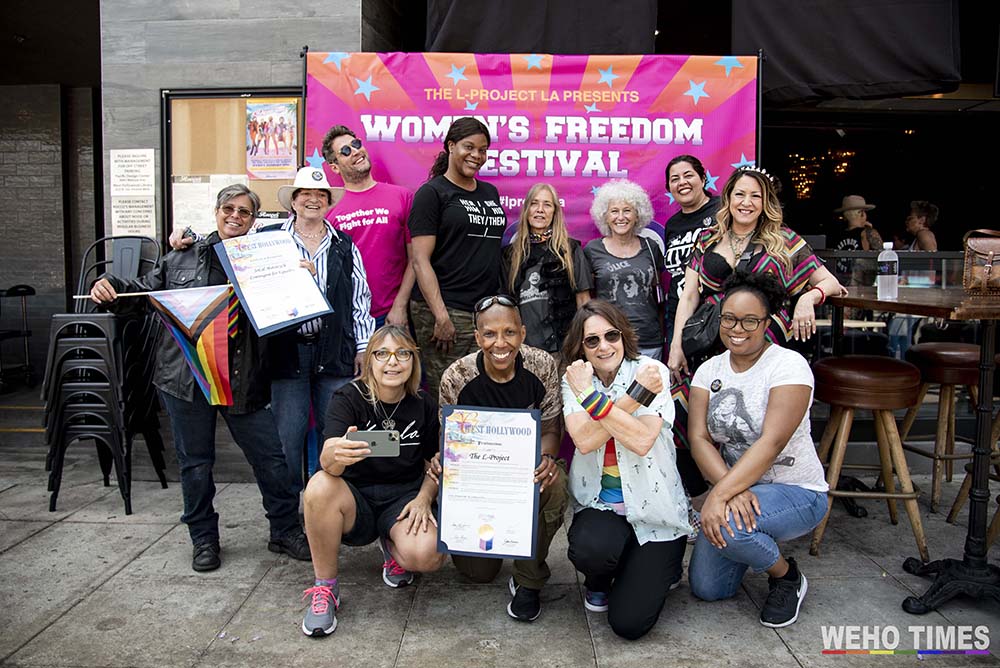 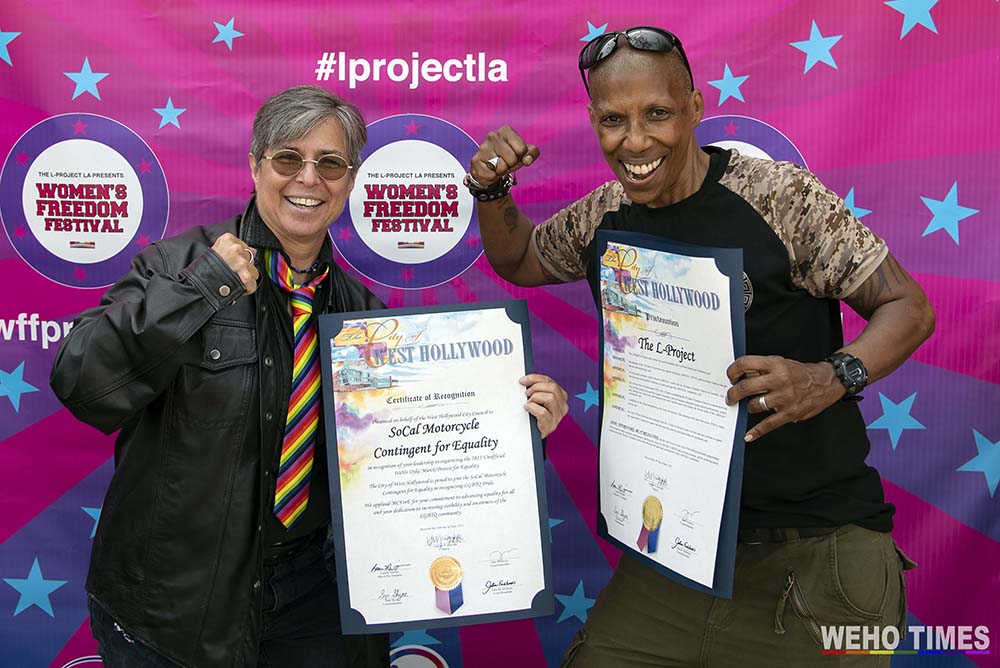 Trans activist and actress, Blossom Chrishelle Brown, and Lesbian activist and comic, Robin Tyler (she was the first plaintiff with wife Diane Olson, to file for marriage rights in California), were among the speakers at the event.

The Women’s Freedom Festival brought four jammed-packed hours of music, art, comedians, fashion, poetry, guest speakers, and more. The festival was free. The L-Project LA’s Mission is to promote, inspire and support women and non-binary creatives through the arts and technology. 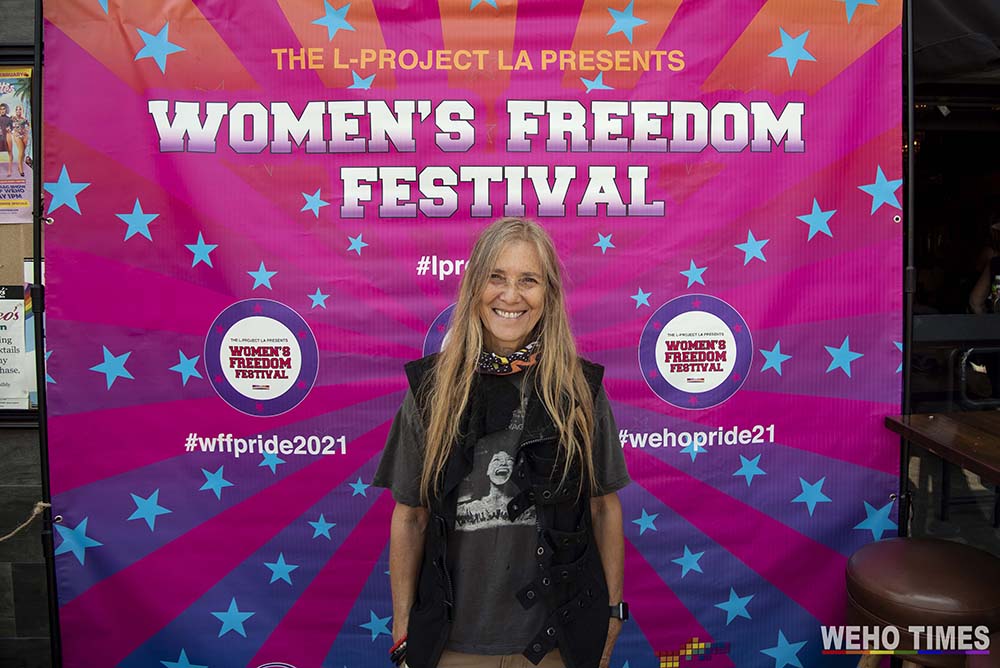 “It was very exciting to have some kind of a dyke march,” Madonna Cacciatore told WEHO TIMES. “Marna did a great job in assembling people. Next year is going to be so much bigger. We didn’t know how many people would show up, because a lot of people haven’t really been out, but just having women, trans women, non-binary people come together and share this energy, it means a lot to me. This is what we all work for. This is pride. We come together and align with our causes to help and elevate each other.” 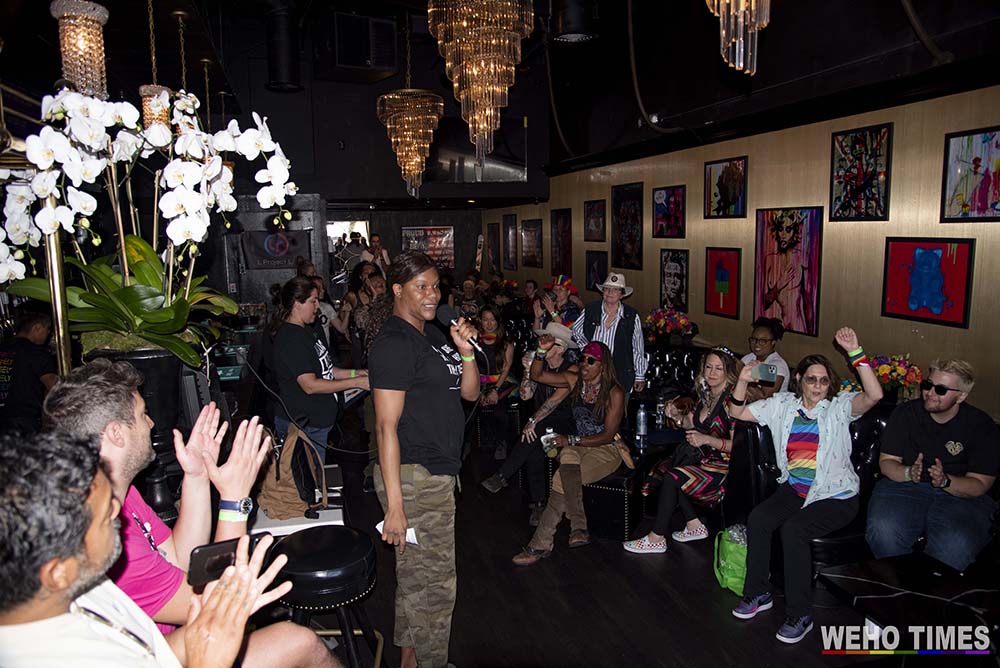 In 2013, the iconic lesbian bar The Palms closed for good in the city of West Hollywood. Spaces for LGBTQI women disappeared. Seeing a need for lesbians to meet outside of the LA bar scene, L-Project LA was formed in 2015. It would become a multi-cultural organization that promotes lesbian art and culture. The organization created the very first Frida Festival, an art and music festival celebrating the life and legacy of a Frida Kahlo. They have consistently grown since, thanks to the helping hands of the community. Their board is an all volunteer, multi-cultural, and inter-generational group of LesBiQueerTI spirits with a passion for uplifting others.

For more information and, visit: https://thelproject.org/

If the mayor of west hollywood is giving proclamations at an unofficial even that sound pretty official to me.

They passed by when I was walking to CVS on Saturday afternoon & got lots of cheers from people & car horns honking in support.