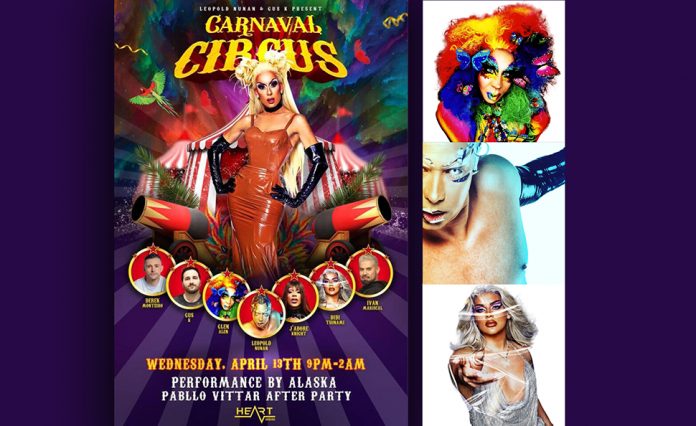 West Hollywood Queer artist Leopold Nunan and Gus K present Carnival Circus at Heart WeHo this Wednesday, April 13, 2022. Leo from Rio is performing at a WeHo nightclub for the very first time with his special  guest Alaska 5000 performing live. Glen Alen will be hosting and welcoming to the stage Didi Tsunami, J’Adore Night and so many more.

“Haaaaaa Mark your calendars, this will be a historic night at @heartweho APRIL 13th WEDNESDAY,” reads a social media post from @leopoldnunan. “FOR THE FIRST TIME I WILL BE PERFORMING LIVE IN A WEST HOLLYWOOD CLUB. I know it sounds absurd but I haven’t been given the opportunity to sing live by the gate keepers of West Hollywood although I am a queer artist resident for the last 12 years. I am very grateful for it and I can’t wait to pump up the crowd singing my own #queer #independent material.”

Leopold Nunan aka “Leo From Rio Sound Machine” was the recipient of the 2021 WeHo Arts Performance Grant. He was granted a free concert at West Hollywood Park this past September. He was generous with his space and featured local artists in a two-hour special full of live multi-genre musical performance that showcased a full band, Dj’s, dancers, drums, special effects, and drag queens.

Leopold Nunan is a showman vocalist, recording artist and performer originally from Brazil. Throughout his career in West Hollywood and Los Angeles, he has performed at hundreds of venues alongside artists from all walks of life. His sound mixes disco, electronic and funk and flirts with global bass, Afro beats, Brazilian favela funk and Brazilian pop.

Carnival Circus at Heart WeHo will be a bigger spectacle, hosted by Glen Alen, and headlining the one and only alien drag queen Alaska 5000. Didi Tsunami will be taking the stage for the first time and there will be a set by J’Adore Night and the night will feature some Samba dancers. DJs Gustavo Katz, Ivan Mariscal, and Derek Monteiro, playing tribute to Pabllo Vittar (there will be a Pabllo Vittar after party as well).

Tickets are on sale at https://wl.seetickets.us/event/CARNAVAL-CIRCUS/476423?afflky=heartweho.