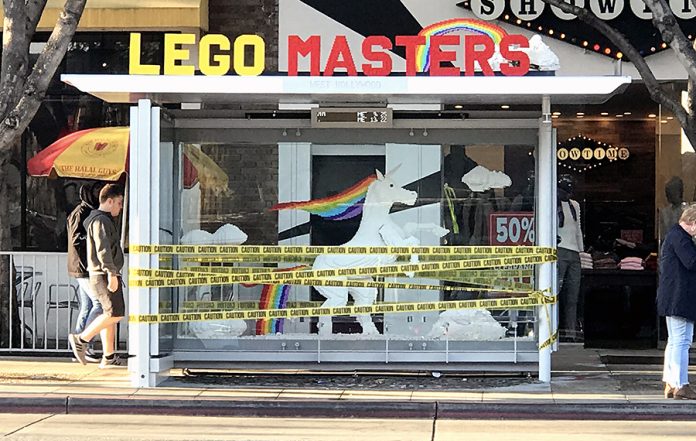 West Hollywood commuters were delighted by the installation of a LEGO unicorn sculpture that went up at a bus shelter located on the corner of Santa Monica Boulevard and San Vicente Boulevard this past Monday, January, 20. However, the rainbow unicorn’s glory was short lived–less than two days to be exact. Caution yellow tape now surrounds the mystical sculpture after the bus bench came unglued and broke off.

The bus bench is made of vibrant lucite that was custom made for this specific art installation. It was made to look like a LEGO block and is supposed to withstand the daily wear and tear of the daily usage from commuters in West Hollywood.

It is unclear who wrapped the bus shelter with the yellow tape. A City employ said he received calls that something was broken, but did not know what what was wrong. He jiggled the bench and it came completely off of its support. He removed the bench and placed it on the back of his truck.

No injuries have been reported.

Using lucite is a bold move considering the clear plastic is vulnerable to vandals who are prone to tag their names on bus benches. It is already beginning to look murky after one full day of usage. 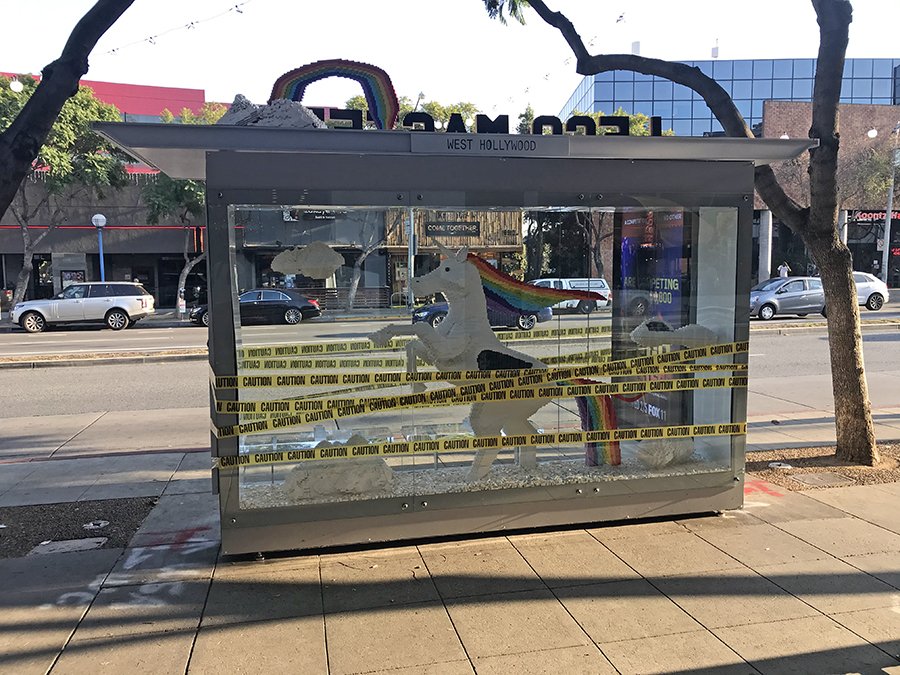 The LEGO unicorn sculpture is a creation by LEGO artists Adam Ward. It is a promotion for the new Fox reality competition series LEGO MASTERS, scheduled to premiere on Fox 11, on Wednesday, February 5.

The show is Hosted by actor and producer Will Arnett. It is based on the hit British reality-competition series of the same name. LEGO MASTERS brings imagination, design and creativity to life when teams of LEGO enthusiasts go head-to-head, with infinite possibilities and an unlimited supply of LEGO bricks. Teams of two will compete against each other in ambitious brick-building challenges to be crowned the country’s most talented amateur LEGO builders. In each episode, Arnett, alongside expert judges and special guests, will encourage the builders, introduce incredible challenges and put their creations to the test. The competing pairs who impress the judges the most will progress to the next round, until the finale, during which the top teams will face off for a cash prize, the ultimate LEGO trophy and the grand title of LEGO MASTERS.

The LEGO unicorn will be up for 30 days. It is located on the bus stop in front of SHOWTIME CLOTHING Store at 8915 Santa Monica Blvd.

To learn more about LEGO MASTERS, the new series by Fox, visit: https://www.fox.com/lego-masters/about-the-show/

UPDATE: The LEGO lucite bench was replaced with the original bus bench a few days after the publishing of this piece. The yellow tape has been removed and the bench is once again operational.

Clarification: In an earlier version of this article, a City Staffer stated that he would reach out to Metro to get the bench fixed—however, Staff from WeHo’s communications department informed us that Metro is not involved in the City of West Hollywood’s bus shelters. The City’s bus shelter vendor, Outfront/JCDecaux, is in contact with the City and it is working on fixing the bench in a timely manner.