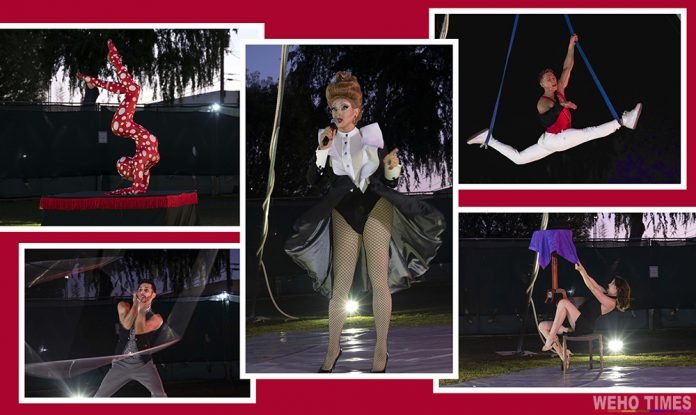 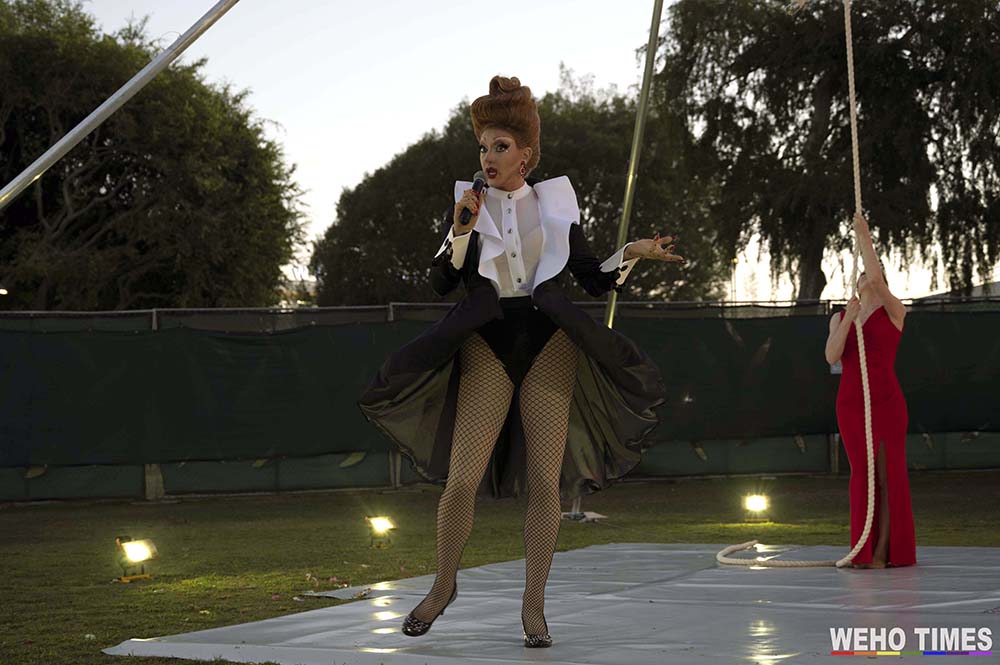 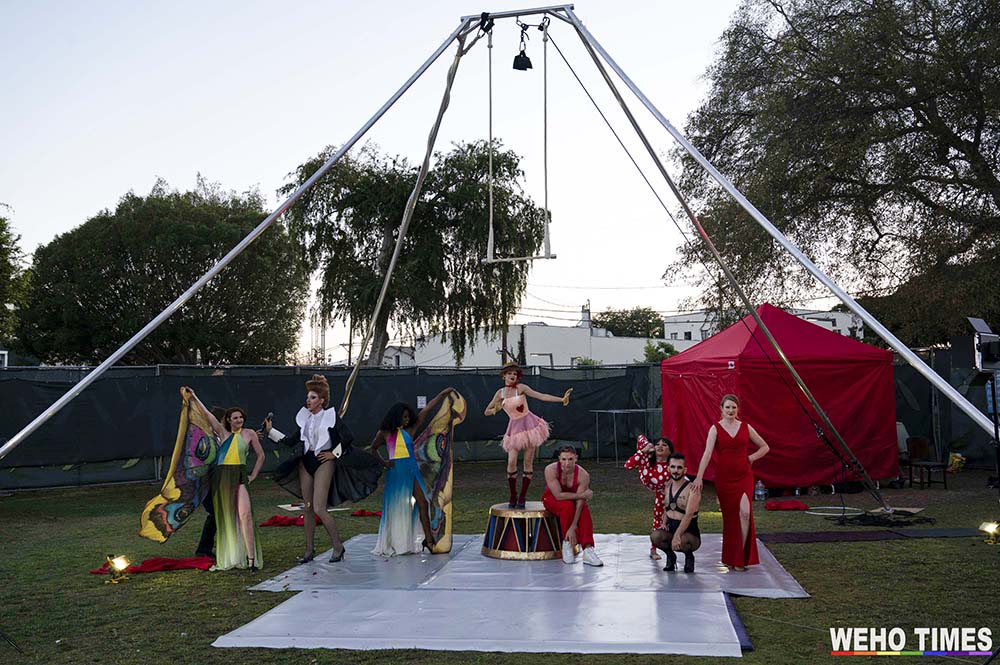 The show began with a tap dancing number by Mila Spigolon who warmed up the crowd with some impressive toe-tapping footwork inspired by old Hollywood musicals. The Brazilian actress, singer and dancer based out Los Angeles is known for bringing a sultry performance to her burlesque, tap, Latin, Swing and Jazz act, and has been featured all over the world for over 15 years.

Jesse Finkelstein brought some much appreciated androgyny to the main lawn at WeHo Park with his baby drag trapeze act. Crazy long lashes aside, he is also an entrepreneur and is currently forming a new company called TattedTips, making custom temporary tattoos, so clients can tip bartenders, go-go dancers, waiters, etc, with the scan of a body part. This is in response to the shortage of cash flow during COVID-19, which has harmed the way people in the hospitality field are tipped. Check him out at https://tattedtips.com. 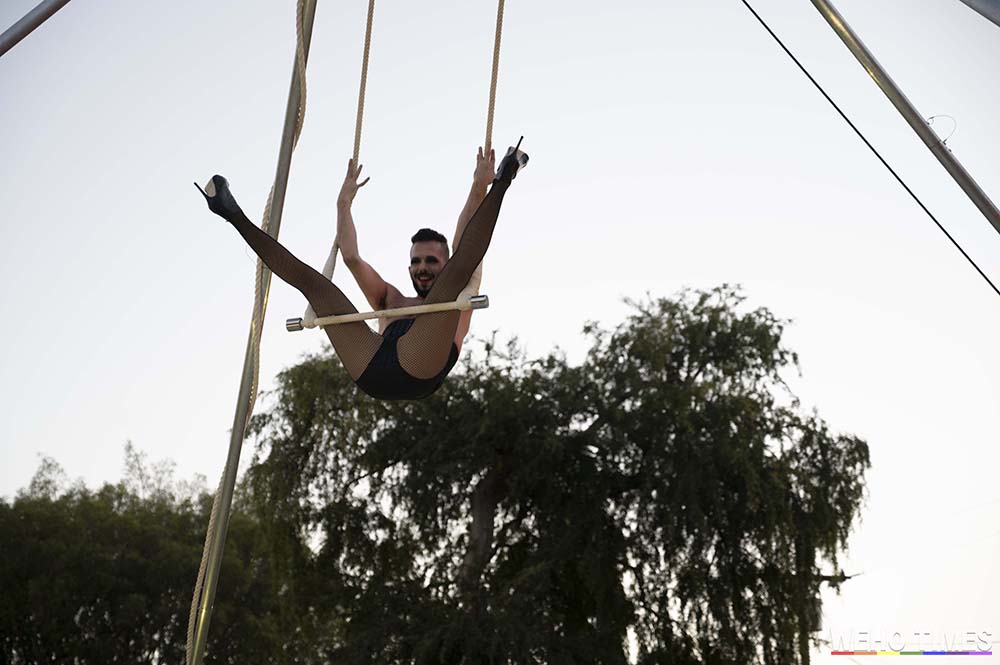 Contortionist Lena Fumi is what the circus cabaret is really all about. She brought to the stage an interesting blend of bends and poses, turning herself into a humanoid creature. The photos below pretty much speak for themselves.

The star of the show Alx Luke, injured his shoulder prior to the show and needed to have it examined before he could perform. However, the show must go on, and go on it did. He went out with a sling and performed with the support of backtup dancers Micah Walters, and Manon Chaney. He performed three songs. On the final performance did some one-armed arial trapeze tricks while singing. 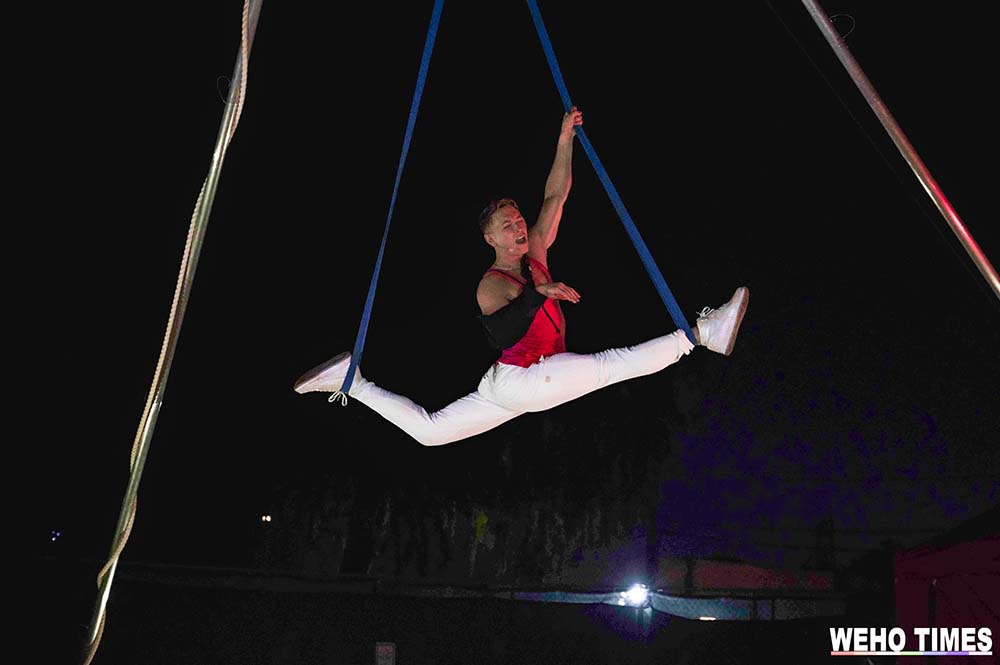 “I have amazing friends right here on this stage, and we’re going to make sure the show goes on” Said Luke. “Especially after 2020, we all can relate to that.”

Shapes manipulator Marcello Belstracci kept the fast pace going while spinning his shapes so fast, it added a dangerous element to the night which seemed to thrill the crowd. Marcello is a trained gymnast, dancer and circus entertainer.

Then there was the founder of Leggy Riggs Elena Brocade who levitate a table and made it her dance partner with the help of a silky hanky. Brocade is directing-producer, she’s an aerial performing artist, choreographer, costume designer, and illusion magician for over 15 years from the Magic Castle. 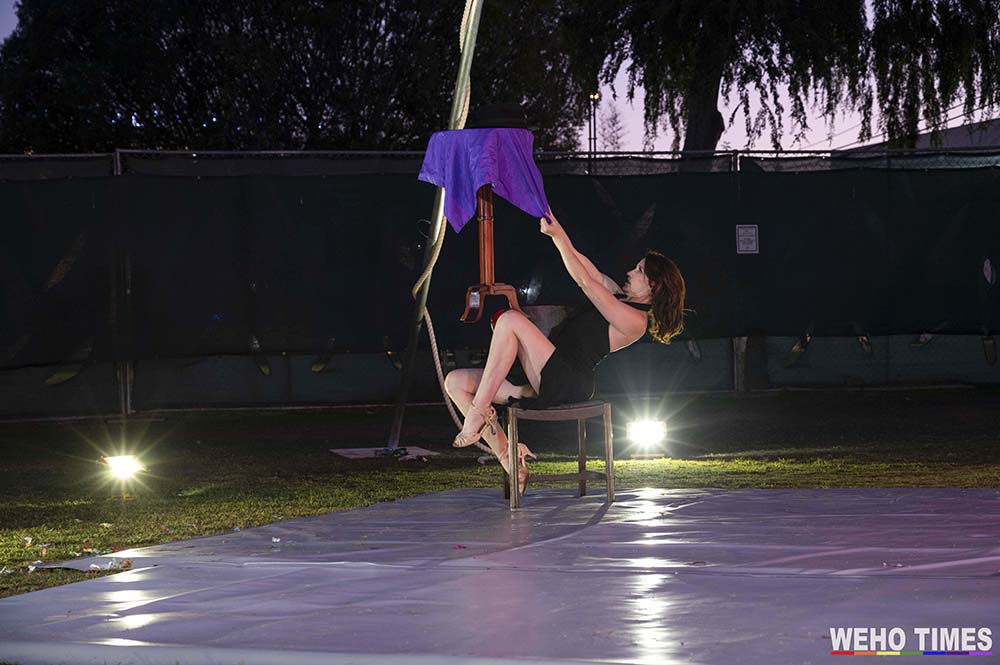 Another performer who defied gravity was Darielle Williams, an aerial dancer who is an actor and stunt woman with an extensive background in circus arts, dance, swimming and gymnastics. 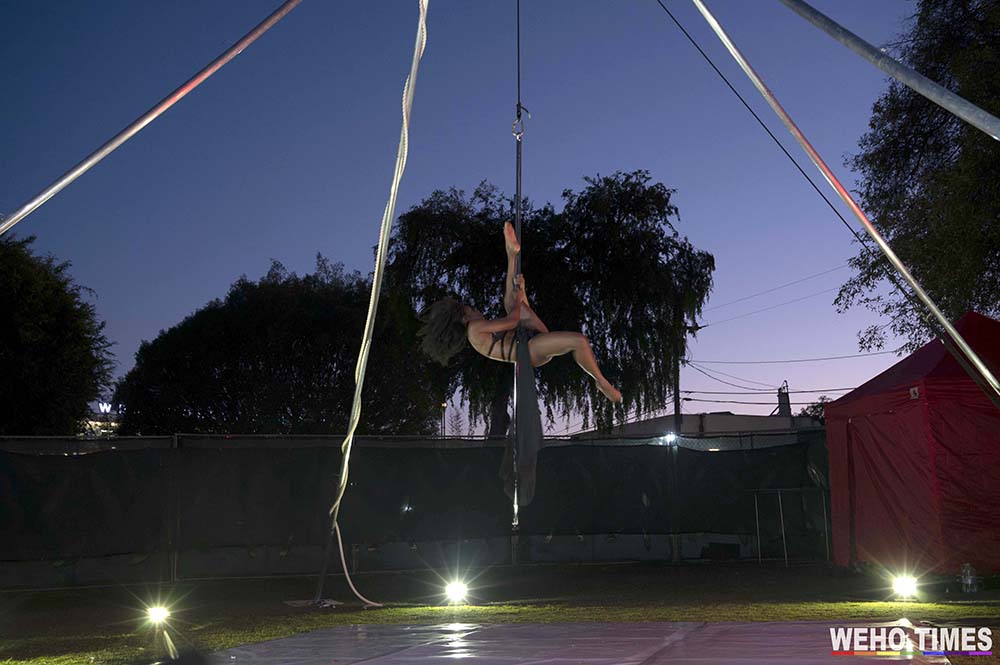 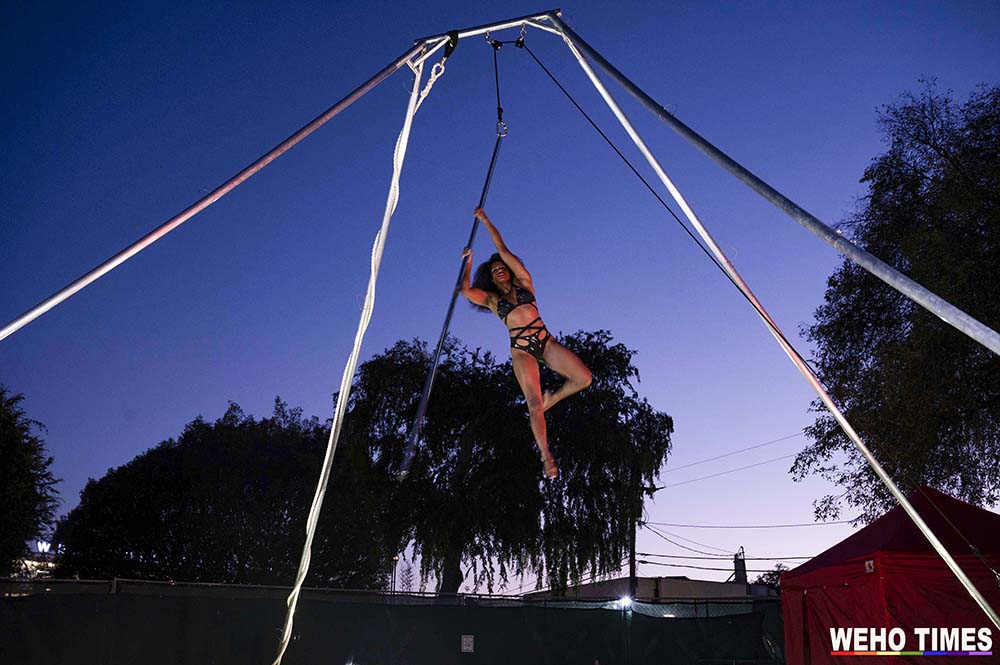 The name Leggy Riggs refers to the portable leg rig used for the pop-up circus cabaret set. The provacative circus act hopes to perform in various iconic and scenic locations, reflecting on the diversity of Los Angeles and moving from city rooftops, mountain overlooks, decadent hotel lobbies, street-side and desert getaways. Stylized in modern couture and the avant-garde, Leggy Riggs brings to the stage a cast of world class performers with various levels of fancy to roughing it – from dinner theater to circus in the park – each Leggy Riggs experience will highlight a local cafe, vinter, or brewery to celebrate the diverse and vibrant communities of Los Angeles, or this case, West Hollywood. 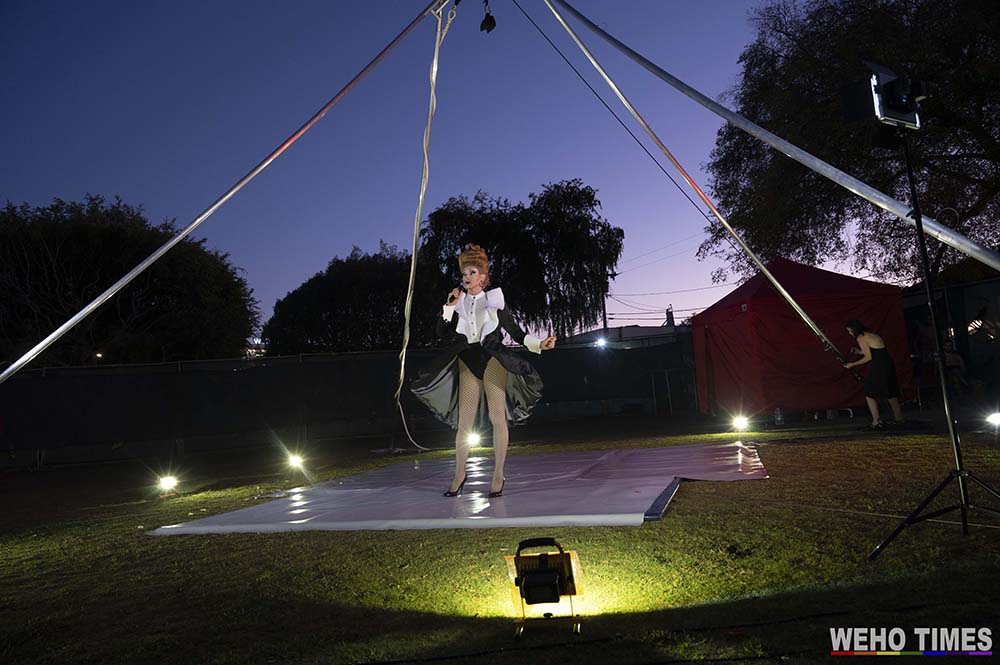 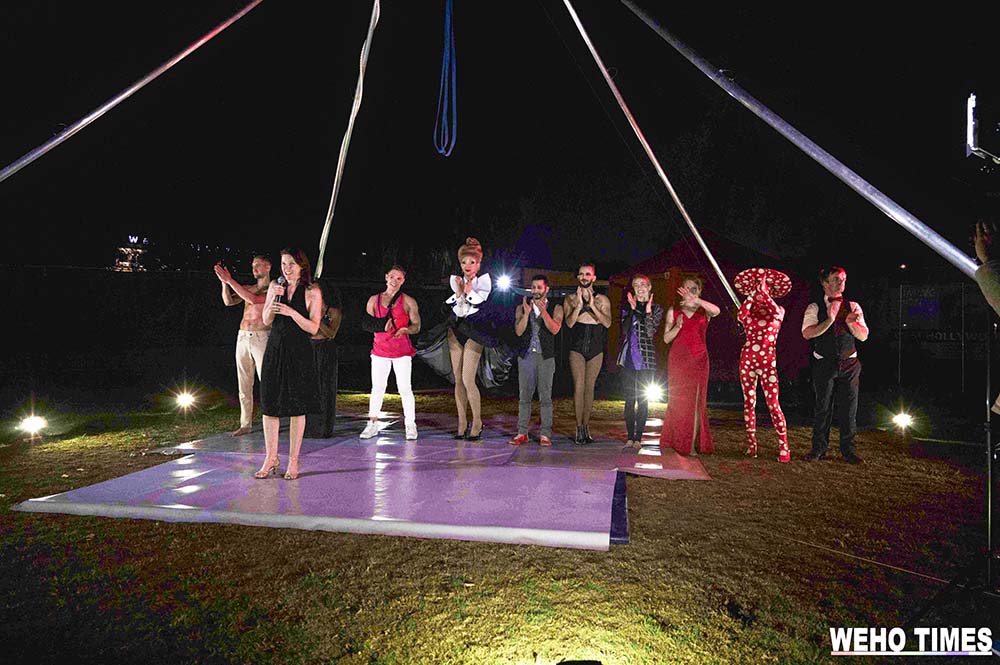 The show is produced by Tracy Erickson in partnership with the City of West Hollywood’s Arts Division.

I loved this show!