LAW & ORDER! Protestors Turn Out to Protect Mueller in WeHo

The Protect Mueller Rally staged at West Hollywood Park last night had a decent turnout of about 200 protesters. Many felt the number of those gathered were impressive, considering it was a last-minute call to send a message to the Trump Administration that Donald Trump is not above the law. The rally was rooted on speculation after Trump fired Attorney General Jeff Sessions this week and put in his place acting Attorney General, Matt Whitaker, who may try to end the Trump/Russia Mueller investigation.

President of the ACLU Westside Chapter and West Hollywood resident, Roy Rogers Oldenkamp, organized the event. The event had scheduled speakers, but for the most part, it was an open mic sort of rally where attendees from the crowd were allowed to speak their minds and air their grievances with the current Administration.

Protestors carried signs that read, “We Support Mueller, ” Whitaker – Recuse or Resign,” “Trump Crime Family Not Above the Law,” “Respect the Rule of Law” and some people wore shirts that read, “Mueller Time,” with the Miller Beer logo.

One surprise celebrity guest speaker at the rally was Sam Waterston, who plays DA Jack McCoy on the show Law & Order. He was there very briefly to say a few words of support. “It’s so terribly important that they know that you’re watching,” Waterston told the crowd. “This is a great big deal. It doesn’t matter whether we are ten, or ten thousand. It matters that we show up and they see that we’ve got them in our sights, so stick with it. God bless you.”

Also in attendance to speak was West Hollywood council member Lauren Meister, who talked about the recent Democratic majority win of the House of Representatives. She told the crowd not to let anyone, especially Trump, who she referred to as “that orange menace,” to diminish that win. Meister also acknowledged the win of over 100 women and how that can only translate into one thing: Healthcare.

“It’s important that we gather during weeks like this,” Meister later told WEHO TIMES. “We had an election that was a positive outcome for Democrats, but other things are going on remind us that we can never stand still. We have to stay vigilant. I think the turnout at this event is fantastic. I’m really pleasantly surprised. Sam Waterston was here, which was so unexpected. The minute I saw him, I thought ‘Law and order! Law and order!’ No one is above the law. That’s the message.”

Protesters took a knee during the singing of Then National Anthem and then they took their anti-Trump signage to the corner of Santa Monica Boulevard and San Vicente, where they flashed the moving traffic. Passing cars honked in support, the crowds cheered in return. 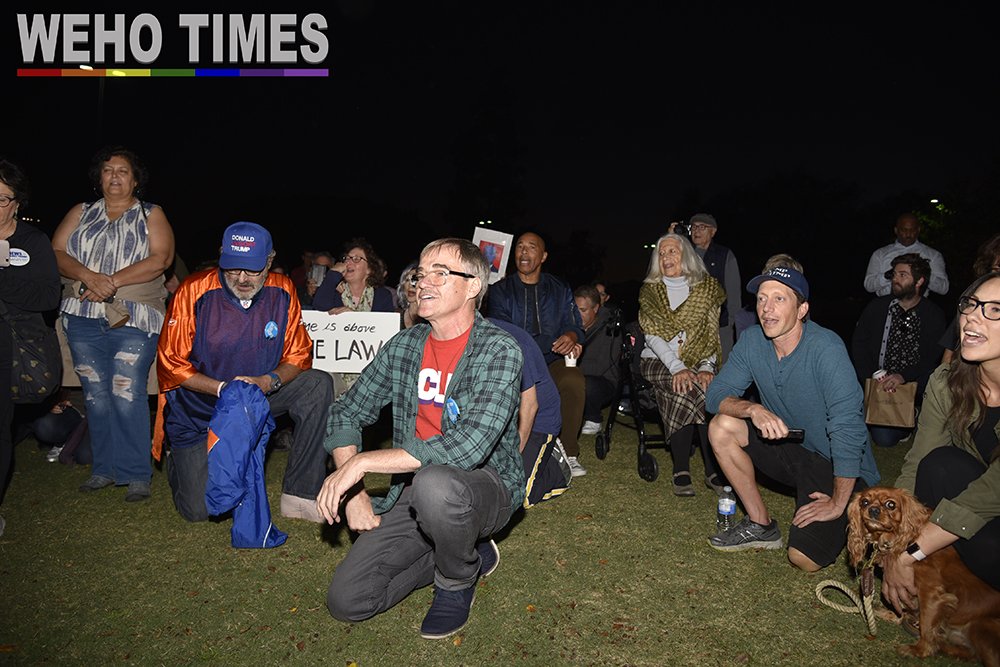 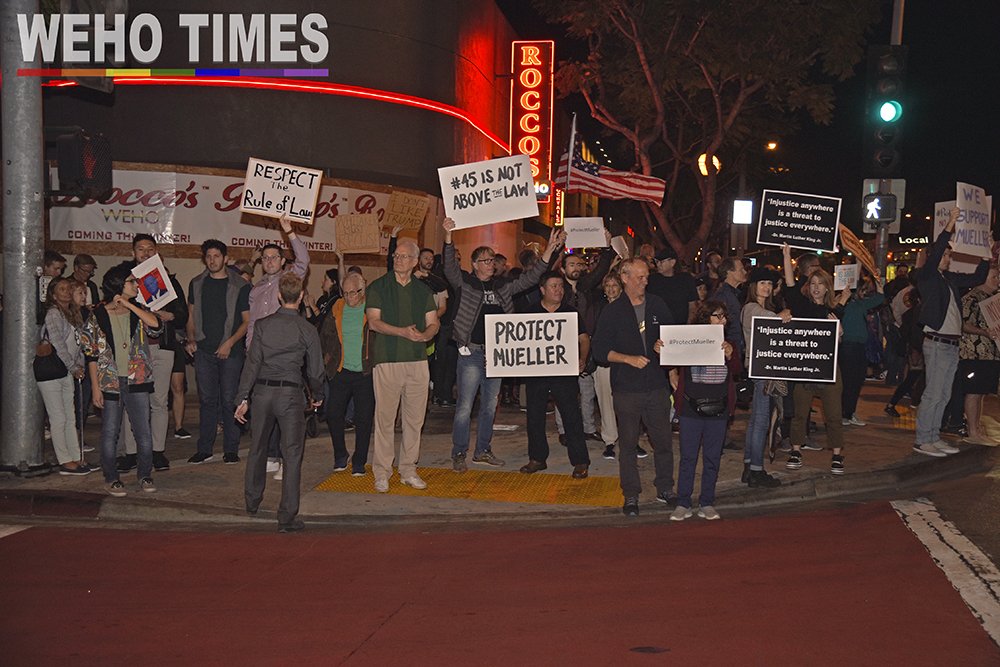 “I’m out here protesting with my family from West Hollywood, because I feel like, unless we’re all treated respectfully and with equality, none of us are treated with respect,” said LA Pride/CSW CEO Madonna Cacciatore, who was there with her wife Robin McWilliams. “We had a rough night in California. We lost thirteen people. We’ve got fires going on. And we have a president who is doing everything to take away our rights. I’m here to be with my family. I support my family and I love my community. I’m happy to be on this corner of West Hollywood where my pride is and where my family is. This is the best place for me to be right now. I love it.”

Protesters gathered all across the nation for similar Protect Mueller demonstrations, via MoveOn Civic Action group. Americans are sending the Trump Administration a message that Donald Trump is not above the law. Cities all across the greater Los Angeles area had gatherings and West Hollywood was no exception.

The Protect Mueller demonstration was a nonviolent, peaceful action. No arrests were made or major incidents reported.