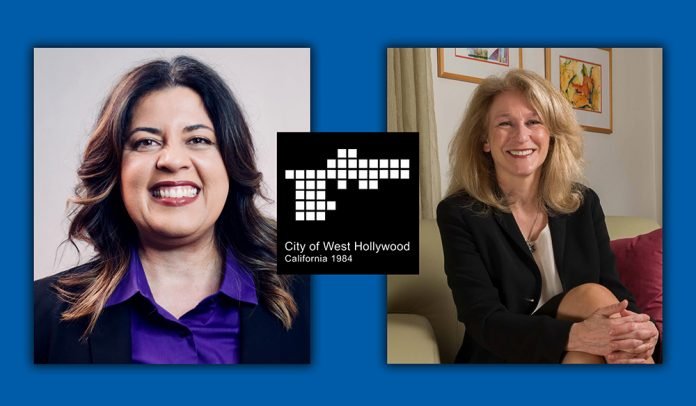 Current West Hollywood Mayor Lindsay Horvath elected Mayor Pro-Tempore Lauren Meister as the new Mayor and council member Sepi Shyne as the new Mayor Pro-Tempore of West Hollywood. They both accepted their nomination. City Clerk Melissa Crowder asked for a roll call vote, which were unanimously in favor of the nominees taking on their new city roles.

Mayor Horvath said this was the first time in the city’s history where a woman nominated two women for the roles of Mayor and Mayor Pro-Tempore.

After nearly two decades as a neighborhood advocate, Mayor Pro Tempore Lauren Meister was elected to the West Hollywood City Council on March 3, 2015 and re-elected for her second term on March 5, 2019.

Mayor Pro Tem Meister became involved with the City of West Hollywood as a neighborhood watch captain, took the LASD Community Emergency Response Team “CERT” training, and attended the West Hollywood Sheriff’s Community Academy. She went on to lead the largest neighborhood association in the city, representing residents on issues such as public safety, traffic circulation, parking and development.

Since being elected, Mayor Pro Tem Meister has worked on initiatives to: strengthen the Rent Stabilization Ordinance, develop more neighborhood-friendly planning and land use policies, provide social services for people who are homeless, create a Small Business Task Force, establish West Hollywood as a safe haven for LGBTQ asylum seekers, increase community engagement and transparency, implement a Public Access Defibrillation (PAD) Program, educate the public on safety issues related to children and pets, embrace and promote our historic resources and, raise the bar on design standards, environmental programs and sustainability.

Professionally, Mayor Pro Tem Meister is the sole proprietor of her own marketing research firm based in West Hollywood. As a businesswoman and market research professional, she listens to public opinion to form action-oriented solutions, understands the importance of budgets and resources, and believes that the City must provide good customer service and be accountable.

As an LGBTQ+ and civil rights leader for more than 20 years, her leadership has helped secure equal rights for all. Before her election to the West Hollywood City Council, Councilmember Shyne served on the City of West Hollywood’s Lesbian and Gay Advisory Board, on the City of West Hollywood’s Business License Commission, and on the Los Angeles County Assessor’s Advisory Council on which she continues to serve. Additionally, she has led many boards and organizations, including the LGBT Bar Association of Los Angeles and as a Board of Governor and Steering Committee leader with the Human Rights Campaign Los Angeles. Councilmember Shyne is a Co-Organizer of WeHo Neighbors Helping Neighbors, a community group created during the pandemic to help get resources to seniors, people with disabilities, and people in immunosuppressed households via social media and volunteer check-in calls. In every board and organization she has led, she has recruited and elevated women and people of color to leadership positions to create more diversity, inclusion, and equity.

Councilmember Shyne lives in the Mid-City area of the City of West Hollywood with her wife and their fur-babies.

Well, we’ll be in good hands for the next year and four months. After that…

Congrats to Lauren and Sepi. I am proud to call them friends.!