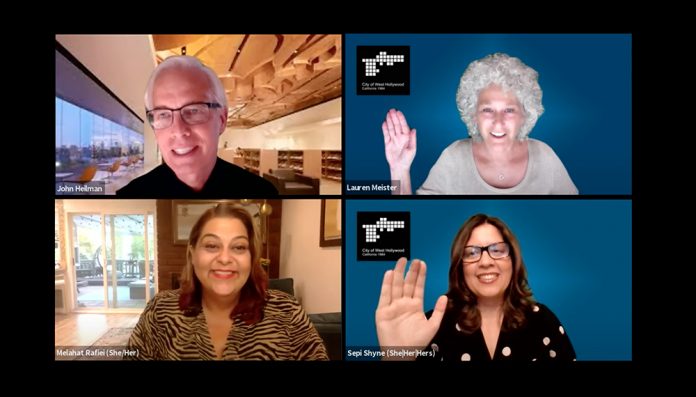 “I wanted to say thank you to my colleagues for electing me to serve as Mayor Pro Tem,” said Shyne. “Thank you to all of our residents, community members, colleagues and staff, and my wife, family, and friends who have been so supportive for the past nine months that I have served in office. Thank you to my dear friend Melahat Rafiei for swearing me in and for the support. Thank you outgoing Mayor Horvath for your leadership and taking up the reigns. We asked you to serve a much longer term in the pandemic as our Mayor. And thank you to our new Mayor Meister for your leadership. I’m honored to served in this new leadership position with you. Serving on this council these past nine months has been the honor of my life. And serving as your Mayor Pro Tempore is a responsibility that I take very seriously. West Hollywood has always been a forefront of making history. We did it once again this evening.

When my parents and I left Iran when I was five to escape the oppressive Islamic regime and the war between Iran and Iraq, I never imagined that one day I would be sworn in as the first Iranian, first woman of color, and first lesbian to serve as Mayor Pro Tem of West Hollywood.

When kids in kindergarten bullied me using anti-Middle Eastern slurs, I never imagined that one day I would be sworn in as Mayor Pro Tem of the City of West Hollywood.

When fellow high school students verbally gay bashed and stalked me in high school for being a lesbian, I never imagined that one day I would be sworn-in as Mayor Pro-Tem of the City of West Hollywood.

In college when my girlfriend and I were thrown out of a coffee shop by a police officer and the coffee shop manager for holding hands, I made up my mind to go to law school, learn the law and stop that from happening to others. And that’s what I did, but even then, I never imagined that one day I would be sworn-in as Mayor Pro-Temp of the city of West Hollywood.

The reason I never imagined serving on elected office is because growing up, I truly did not see anyone that looked like me, grew up like me, and loved like me on elected office, but since November 2020, and especially now, I know that another little Middle Eastern brown girl who may be queer can now imagine herself on elected office, because she now can see herself. And that is one of the most powerful things. Representation matters.

I wanted to serve on the City Council to represent people of our amazing city and to bring your voices and more equity to the city. The people wanted progressive change, and in the past nine months, I have delivered on that mandate. I’ve had countless conversations, and virtual and in-person meetings with residents, workers and stake holders, to discuss how we can make West Hollywood better. I’ve had the honor to serve on the Laurel House Homelessness events and pride subcommittees with colleagues, as well as now representing West Hollywood as a Chair on the westside city council of governments.

I have initiated, co-sponsored, and passed 34 council items, which I am so proud to say have nearly all had unanimous council support. Some of the ones I want to highlight tonight are the creation of the Social Justice Task Force that is now successfully appointed and working on policy recommendation for us to help address systemic racism. The creation of business roundtables, grants for the most vulnerable small businesses, and the creation of the Business Recovery Task Force, incentives for LGBT BIPOC women and local residents to start small businesses in our city; an ordinance strengthening our tenant harassment ordinance and providing further protections for renters; the multi-stall for bathroom ordinance, which will ensure that our transgender and nonbinary families, same sex parents of opposite sex children, and people with disabilities that have an opposite sexed caretaker, have equal and safe access to bathrooms; the development of a citywide Behavioral Health Crisis Response Unit that will reduce law enforcement response to homelessness and in other areas the unit serves in order to provide solutions from experts that work; several items which directed staff to study or update our zoning related to our affordable housing and capacity; bring our codes up-to-date with newer type of housing development, being proposed that there are standards in place, rather than loopholes; an initiative to highlight pet-friendly businesses and develop pet week in the City of West Hollywood, which includes a special day dedicated to our beloved felines.

And finally, Making sure that recover includes everyone by expanding protections and wage equity for hotel workers, including panic buttons, the right of recall and retention, overtime consent, public housekeeping training and excessive workload compensation. For the next year and four months I look forward to working with Mayor Meister, to ensure efficiency and continued good leadership. I look forward to continue being accessible to constituents.

I’m excited about the business recovery task force, which will soon be formed to ensure that we have a five-year blue print for business success, recovery and diversification. I look forward to continuing to pass items that help our residents, small business and workers and working with my council colleagues. I look forward to bringing more transparency and ethics to our government and creating a more healthy environment to combat our climate crisis, have more community-based solutions to strengthen our community safety, help get our unhoused members the housing services that they need, as well as focusing on our city’s recovery. West Hollywood is truly one of the best cities to live in, work in, and play in. I’m so grateful to be your next Mayor Pro Temp.”

“I have a few words myself,” said Mayor Meister. “Today is bitter sweet. I have the second anniversary of Spike’s passing. it’s also the beginning of the Jewish holiday, Sukott, the Season of Rejoicing. According to Habab, it’s a festival with unique Mitzvahs, quality time with our community and family, all with an extra large serving of joy. I’m hopeful that my swearing-in on this festive day is a good Omen. I want to thank everyone for their well wishes and support. I want to thank family for their love and encouragement and unlimited patience. I want to thank my colleagues for your vote of confidence as I take on the role of Mayor for the second time. I also want to thank my former council colleague John Heilman for swearing me in as your Mayor tonight. It means a lot to me.

When I was installed as Mayor back in April 2016, I spoke about renewing the community spirit of helped form this great city nearly 37 years ago, which John and others were a big part of. As a community, we gathered as one after 9/11. We mourned the tragedy of Pulse Nightclub mass murder. We celebrated marriage equality. And we marched, stood up to, and survived a challenging national political climate. I lived in this city over 30 years. And over the years I witnessed many stages in our city’s maturity. I have seen issues divide our city. I have seen the eastside pitted against the westside, businesses pitted against residents, tenants pitted against landlords, but I have to say that after being elected to council, the drama that’s plagued every council meeting with a controversial topic, the theater, and a lot of it was theater, seemed to disappear. Now, however, we are seeing a divisiveness that I haven’t seen in a while. It’s disturbing. It’s disturbing because we are one small city and one community; a community comprised of people from all walks of life; a community of young people and older people; a community of businesses and workers–all must be valued, none should be discounted. A rainbow flag is not six colors or ten colors. If it truly represents our community, then it is an infinite number of colors. Putting people into categories, labeling them, disparaging them, does not serve this community.

I’d like to say today that my goal as Mayor is to solve our three biggest issues: Homelessness, housing affordability, and making our city safer. As mayor I’d like to strengthen our neighborhoods, encourage economic diversity, and further initiatives to protect renters and our small businesses. I’d like to make West Hollywood a premier green city by increasing our urban forrest and increasing bio diversity. I’d like to find a companion care center home for our lost, found, and abandoned animals. And importantly, I’d like West Hollywood to be the most progressive and resilient city in our country. For whatever emergency or disaster strikes, whether it be earthquake, drought, pandemic, or recession, but none of this can happen if we don’t work together and focus on the city’s recovery from this pandemic. None of this can happen if we don’t focus on keeping people healthy and getting people vaccinated. None of this can happen if we as a council don’t make recovery our number one priority.

So in the coming weeks, I will be bringing forward a proposal requesting that the city manager arrange several team-building workshops for council designed to help foster communications among council members, to clarify council’s role, and to identify priorities and common goals.

The objective of the workshop will be to transform our new council and our new city manager into an effective effective problem-solving team.

Now I come full circle to why I asked former colleague John Heilman to swear me in today as Mayor. As many of you know, John and I did not agree on every issue, and in fact, before I was on council, I was probably one of council’s most vocal critics. But once we were colleagues, we learned to work together, respect each other, and most importantly, acknowledged that we both cared about the best interest of the city, even when we didn’t agree. So I appreciate that John was part of my swearing-in today, because to me it symbolizes hope. That there’s hope that people with different perspectives can work together effectively for the city they love. And as your Mayor, I’m confident that this is something we, council, residents, businesses, and other community members can achieve in the months to come. Thank you.”

Mayor of Beverly Hills, Bob Wunderlich and Beverly Hills Council member Julian A. Gold, M.D. thanked outgoing Mayor Lindsey Horvath for her efforts and her leadership during this challenging year and they welcomed new Mayor Meister and Mayor Pro-Tem Shyne, saying that he looked forward to get to with them both.

Also present at the meeting to say some congratulatory words were Mike Aguilera-Gaudette from the office of Congressman Adam Schiff, Davis Han from Senator Ben Allen’s office, and Josh Kurpies from the office of Assembly member Richard Bloom.

Outgoing Mayor Lindsey Horvath was also presented with a City Proclamation highlighting her many accomplishments in the past 16 months of leadership.

Congrats to Lauren and Sepi! I am looking forward to a very productive year!!!