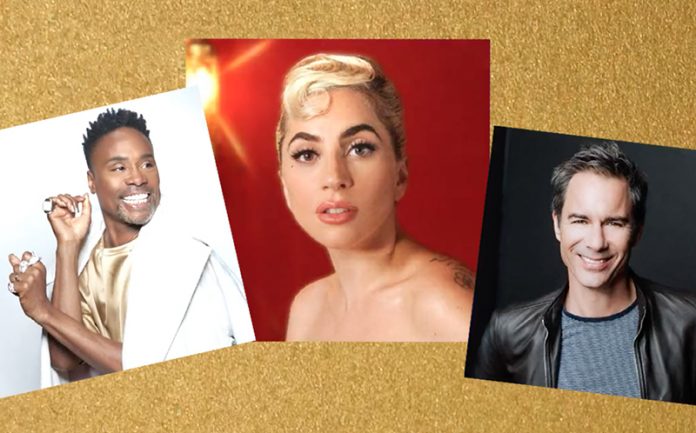 Elton John has announced via his official Twitter account that Lady Gaga, Eric McCormack, and Billy Porter will be hosting the Elton John AIDS Foundation Academy Awards Viewing Party and Charity Fundraiser on its 30-year-anniversary. The Elton John AIDS Fundraiser will be co-hosted by David Furnish at the newly open West Hollywood Park, on March 27, 2022.

“For the return of #EJAFOscars to West Hollywood for the first time in 2 years, I’m so excited to share that my good friends @ladygaga, @EricMcCormack & @theebillyporter will be co-hosting @EJAF’s 30th Academy Awards Viewing Party with David!”

For the return of #EJAFOscars to West Hollywood for the first time in 2 years, I’m so excited to share that my good friends @ladygaga, @EricMcCormack & @theebillyporter will be co-hosting @EJAF’s 30th Academy Awards Viewing Party with David!

Thank you for supporting our mission. pic.twitter.com/XjokMe27md

Elton John will be joining via satellite from his rescheduled concert in Lincoln, Nebraska, and David Furnish will lead the show with a star-studded line-up of co-hosts. Six-time Grammy Award-winning singer-songwriter, performer, producer, and New York Times best-selling author Brandi Carlile is set to perform. Additional names joining the event will be announced in the coming weeks.

“David and I are so grateful to celebrate 30 years of the Foundation and especially grateful to Brandi Carlile and the many fabulous guests supporting us for another magnificent night in West Hollywood Park,” said Elton John in a statement. “Our success reflects the passion, commitment, and generosity of our supporters. Together, we are making a difference and bringing light and hope to people living with HIV around the world.”

The Elton John AIDS Foundation’s Academy Awards Viewing Party has grown from an intimate dinner in Beverly Hills to one of Hollywood’s most star-studded occasions, known for its performances, on-stage talent, and auction. All funds raised during the evening will support the Foundation’s network of partners and local experts across four continents to challenge discrimination, prevent infections and provide treatment as well as influencing governments to end AIDS.

In 2020, the Elton John AIDS Foundation Oscar Viewing Party and Charity Fundraiser raised $6.4 million dollars and at the virtual event in 2021 they raised $3 million dollars to help end the AIDS epidemic.

The 2022 event held in West Hollywood Park will see street closure of San Vicente Boulevard between Santa Monica Boulevard and Melrose Avenue for event arrivals and departures from 2:00 p.m. on Sunday, March 27, 2022, through 6:00 a.m. on Monday, March 28, 2022.

For more information about the event or to inquire about a ticket request form contact: aavp@eltonjohnaidsfoundation.org.