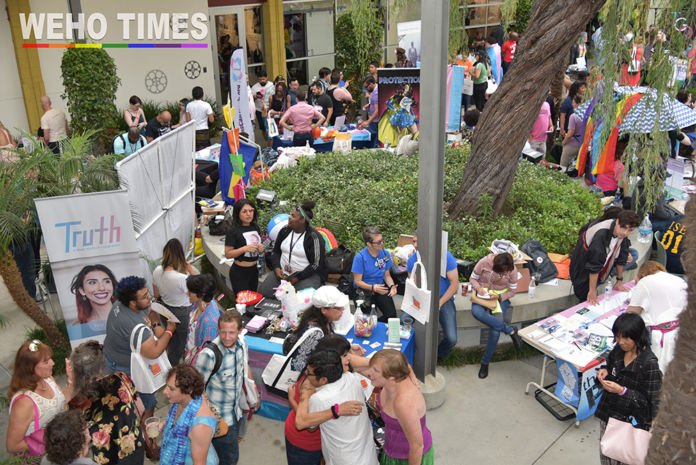 The Los Angeles LGBT Center hosted their annual Trans Pride LA at The Village Ed Gould Plaza in Los Angeles this past weekend, June 15-16. One of the largest and oldest trans celebrations in the country also received the largest crowd participation this year.

The two-day event kicked-off with The Center’s ongoing community forum series Big Queer Convo. This year’s speaker was Minneapolis City Council member Andrea Jenkens, who is the nation’s first openly transgender African-American woman to be elected to public office with more than 70 percent of the vote.

The weekend offered an art exhibit in The Village’s Advocate & Gochis Galleries, featuring the photography of Academy Award-nominated filmmaker/photojournalist Kimberlee Acquaro; there was a self-defense workshop, a clothing swap sponsored by TransTribe Los Angeles, and a discussion with gender nonconforming/non-binary panelists. There was a reception with music and refreshments in The Village’s spacious courtyard, as well as a Shine Underground Karaoke. This year, approximately 40 organizations participated in the resource fair to offer information on a wide array of services and programs vital to the trans community.

“My take on this event is that it’s powerful and necessary,” trans activist Buck Angel told WEHO TIMES. “I was here last year and I would say it doubled in size this year. Not only that, the energy here is awesome. I think people are starting to feel empowered. Empowerment makes people feel powerful. I think last year people were a little scared because Trump was fucking around with shit. You can quote me on that.”

“The check supports the construction of the building across the street. It is helping to feed seniors and to house seniors, or trans seniors who need their hormones,” Angel added. “We have homeless fucking seniors! Shame on you LGBT community. Shame on you for letting at least one of our elders be homeless. There should never be a homeless LGBT elder. Those elders are the reason we have the freedom to have parties like this today. Those people got us here. We need to respect them.”