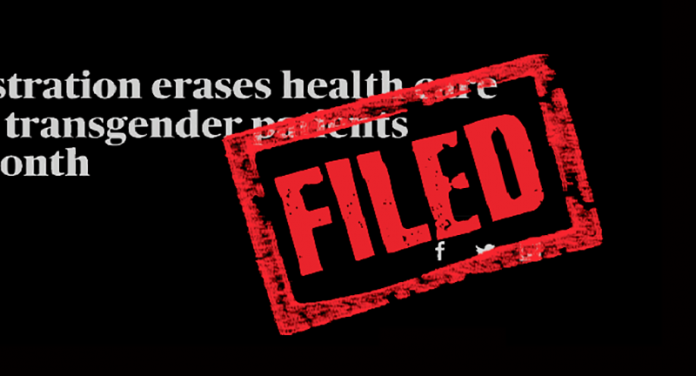 Los Angeles LGBT Center suing the Trump Administration. The Center has joined a lawsuit filed by Lambda Legal and Steptoe & Johnson LLP challenging the U.S. Department of Health and Human Services’ (HHS) recently published health care discrimination rule that purports to carve out LGBTQ people and other vulnerable populations from the protections of Section 1557 of the Affordable Care Act, which prohibits discrimination on the basis of sex, among other bases. The Center is a plaintiff in this lawsuit and is joined by five other organizational plaintiffs and four individual doctors, including two of the Center’s physicians, Chief Medical Officer Robert Bolan, M.D., and Health Services Co-Director Ward Carpenter, M.D.

“Our actions today reflect our deep commitment to ensure that our clients and our community have full and equal access to healthcare,” said Center CEO Lorri L. Jean. “Many of our clients come to the Center because they have faced discrimination and dehumanization when trying to access basic medical care from other providers. The fact that our nation’s government would seek to restrict access to care during a worldwide pandemic is yet another dangerous example of this inhuman assault on LGBTQ rights. We are dedicated to providing compassionate healthcare to each of our clients and are steadfast in our determination to protect the LGBTQ community, which includes fighting back against this administration.”

In 2016 the Obama administration finalized a rule implementing the nondiscrimination provisions of the Affordable Care Act—also known as Section 1557—that prohibit discrimination based on gender identity, transgender status, or sex stereotypes as forms of sex discrimination. In May 2019 the Trump administration announced a proposed rule change designed to roll back these protections. The proposed rule would carve out LGBTQ people from the Affordable Care Act’s nondiscrimination protections and invite health care workers, doctors, hospitals, and health insurance companies that receive federal funding to refuse to provide or cover health care services critical to the health and wellbeing of LGBTQ people.

“While HHS’s health care discrimination rule cannot change the law, it creates chaos and confusion where there was once clarity about the right of everyone in our communities, and specifically transgender people, to receive health care free of discrimination,” said Omar Gonzalez-Pagan, Senior Attorney and Health Care Strategist for Lambda Legal. “Today, Lambda Legal, a broad coalition of LGBTQ groups, and the people our clients serve say ‘enough’ to the incessant attacks from the very agency charged with protecting their health and well-being. For years, the Trump administration has utilized HHS as a weapon to target and hurt vulnerable communities who already experience alarming rates of discrimination when seeking care, even now, during a global pandemic. Their actions are wrong, callous, immoral and legally indefensible. We will fight back.”

On Friday, June 19, HHS published the health care discrimination rule, which is scheduled to go into effect August 18.