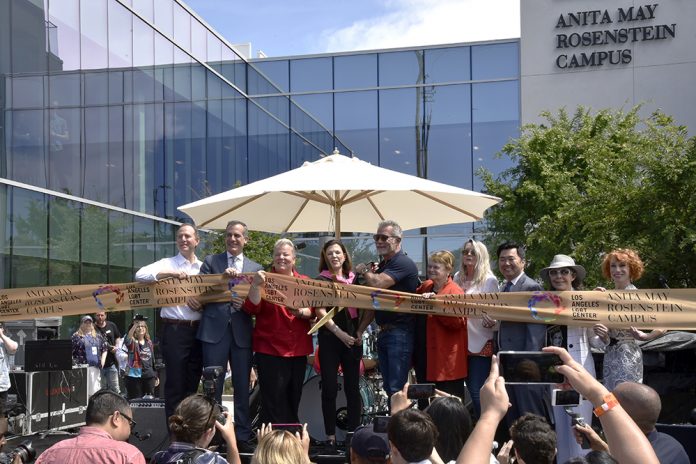 The Los Angeles LGBT Center hosted a massive celebration to commemorate the grand opening of its revolutionary Anita May Rosenstein Campus, the world’s first intergenerational facility serving LGBT Seniors and Youth. The six-hour block party took place on Sunday, April 7, 2018. The opening happened two years after The Center broke ground on March 18, 2017. The opening coincides with The Center’s 50th anniversary.

The party offered live performances, food trucks and plenty of booths offering information on the long list of services that the LA LGBT Center has to offer. There were guided tours of the new facility throughout the day and plenty of free water was distributed to refresh attendees in the outdoor heat. 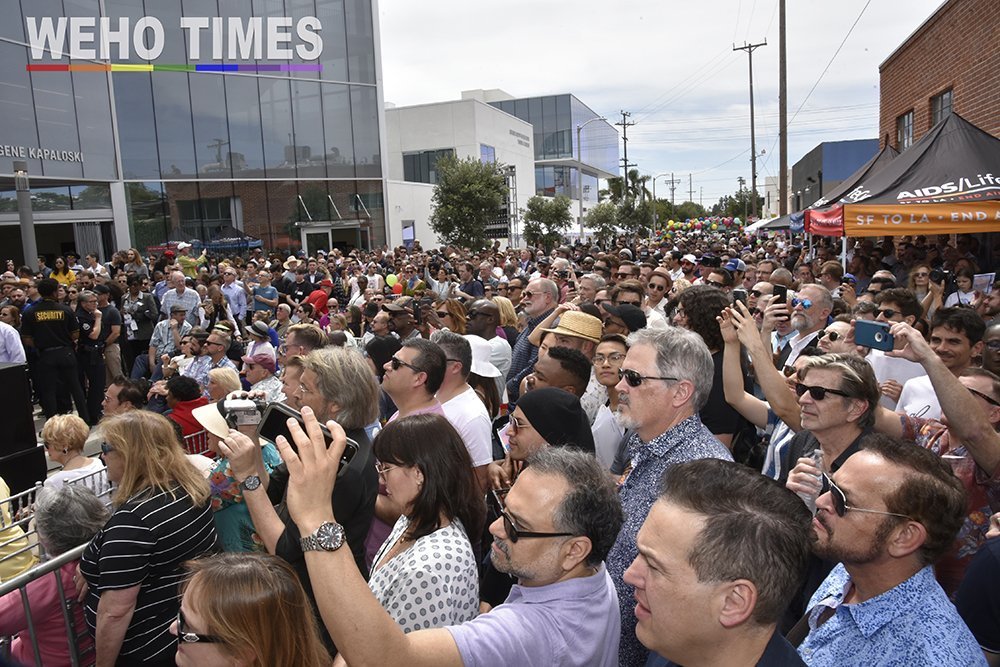 The event attracted a long list of celebrities, politicians and dignitaries who walked on a brightly colored rainbow carpet. Among them were actress and comedian Lily Tomlin, who payed homage to Justice Ruth Bader Ginsburg, while wearing a Notorious R.B.G. t-shirt. Congressman and House Intelligence Chairman, Adam Schiff, stopped for photos before taking the stage as one of the speakers of the event. 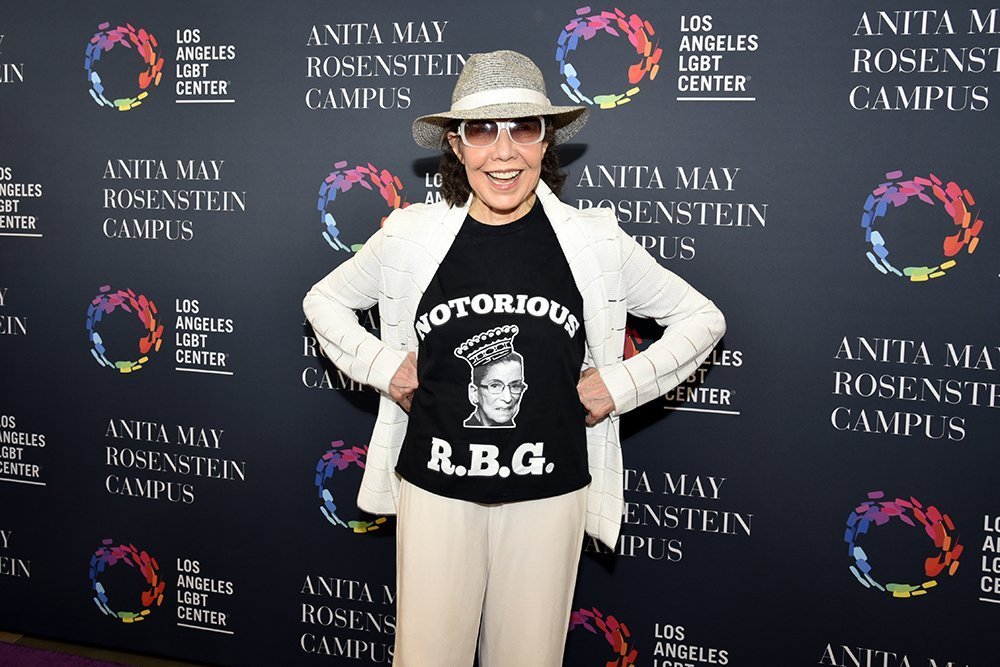 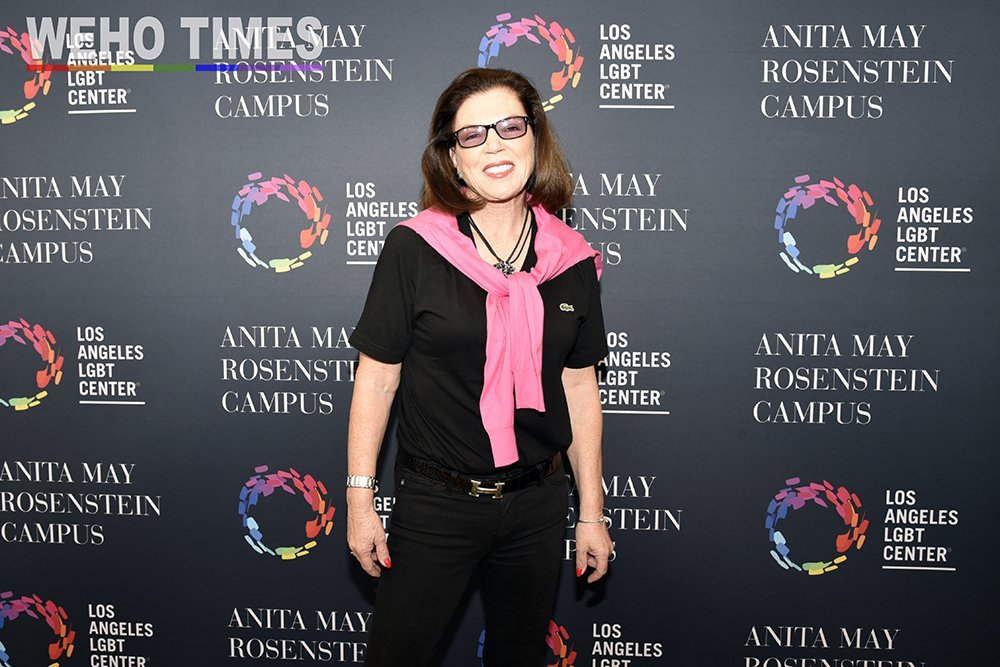 The woman who’s name is on the Campus building, Anita May Rosenstein, also walked the colorful carpet. She casually posed for photos and spoke to the press.

“The building is more beautiful than I imagined,” Rosenstein told WEHO TIMES.
“I think the reason it got done in two years is because we had great leadership in Lorri [Jean] and David [Bailey]. Steven Burns, our project manager was amazing, and so was the Swinerton construction. We got the best in the country. And believe me, we still have a long list of things to do. I walked around here last night and pointed things out and thought ‘What’s this crap? That needs to go, (laughs).’ It’s pretty amazing that we got it done.”

The new campus is truly amazing. With 100 beds for homeless youth, a new Senior Community Center, Youth Drop-In Center and The Ariadne Getty Foundation Youth Academy, as well as expanded programming, administrative space, and more, the Campus will also serve as the Center’s flagship facility. Its current headquarters (located at the four-story McDonald/Wright Building) will be transformed entirely into a health center. Phase II of the Campus—scheduled to open in mid-2020—will include 99 units of affordable housing for seniors and 25 supportive housing apartments for youth. 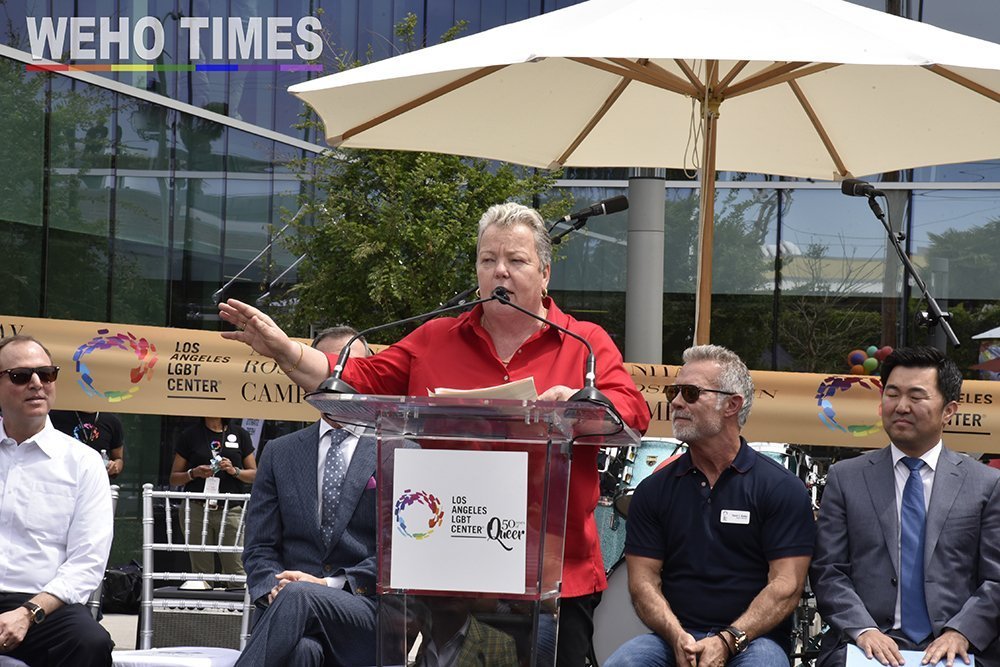 “This day has been more than eleven years in the making,” LA LGBT Center CEO Lorri L. Jean, announced from the stage at the event. “In 2008, our board of directors approved a visionary strategic plan calling in part for a dramatic expansion of services in housing for those in our community who need it the most, our youth and our seniors. The Anita May Rosenstein Campus is the fulfillment of that dream.” 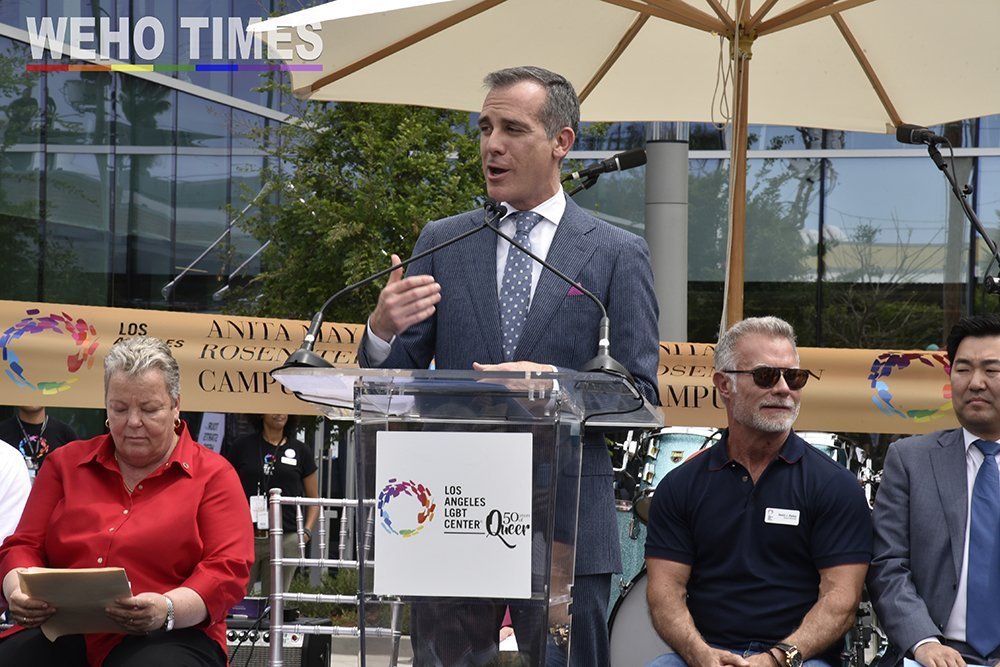 Comedian Kathy Griffin channeled Congressman Schiff in her speech while he looked on. 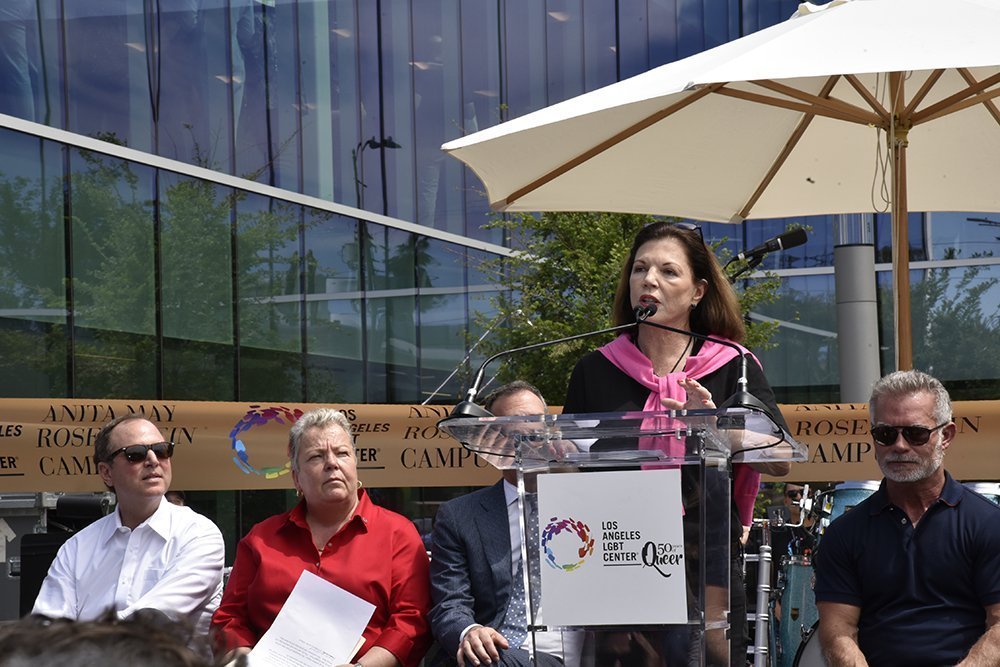 “My parents taught me that if you can give, you must give,” Rosenstein said from the podium. “Another mentor in my life was Lew Wasserman, who said when you give money, give to organizations that have great leadership and low expense ratio. And The Center excels in both of these. The Campus is groundbreaking because it provides intergenerational living and support. It will bring love. It will bring hope to tens and thousands of people. I can’t tell you how much it means to me that I took part in this. I hope it will be life changing.”

The second largest contributor of the project, Ariadne Getty joined those on stage for the ribbon cutting ceremony. 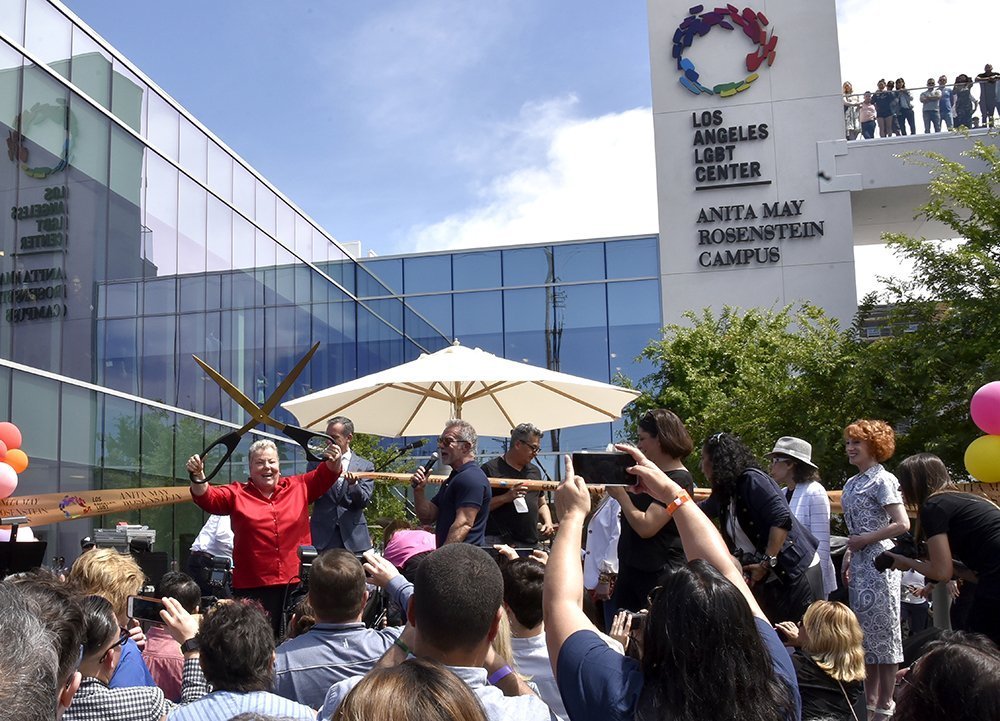 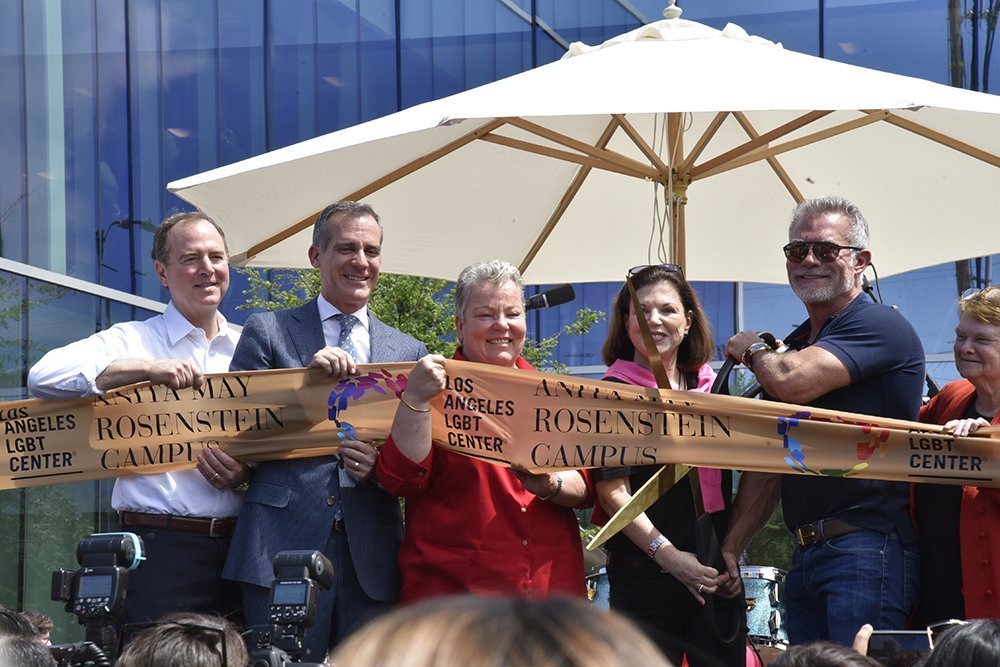 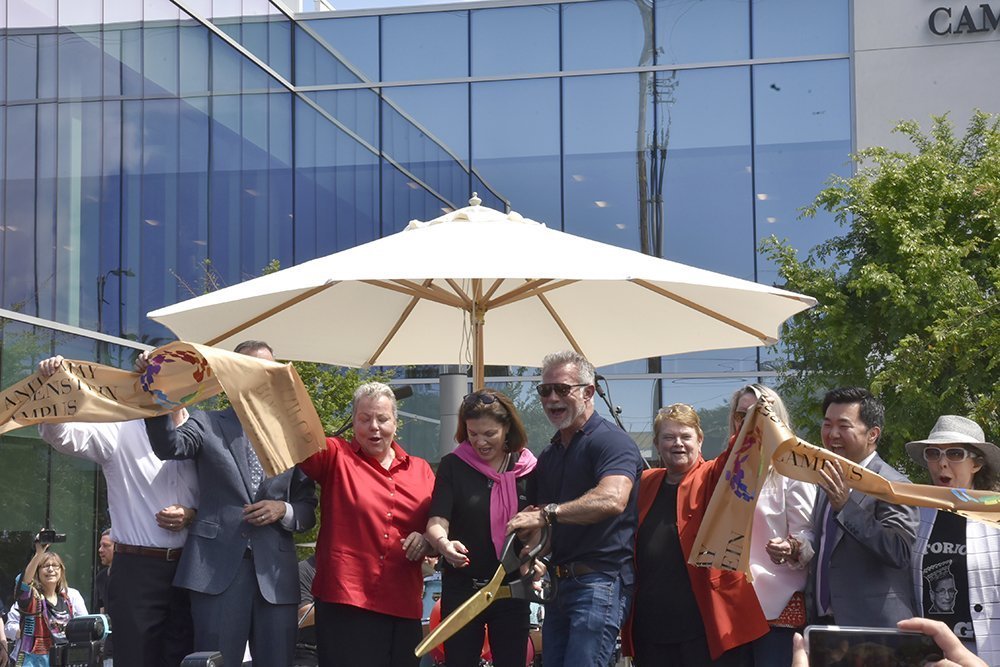 Comedians’ Kathy Griffin and Lily Tomlin treated the audience to their comedy set after the ribbon was cut. The party continued with other performers that included the Trans Chorus of Los Angeles, singer Betty Who, and RuPaul’s Drag Race alumnus Changela, to name a few.

Total costs for the Campus exceed $141 million. Of that amount, more than $57 million has been raised through gifts from generous individual and foundation donors, and another $9.5 million in New Market Tax Credits. The affordable housing costs ($63 million) are covered by government and other funding streams. After combining the generous gifts of the capital campaign donors with a contribution from the Center’s strategic reserve fund (approved by the Center’s Board of Directors), the Campus will be mortgage-free once everyone pays their pledges.

To learn more about the Los Angeles LGBT Center and its new Anita May Rosenstein Campus, visit www.lalgbtcenter.org.