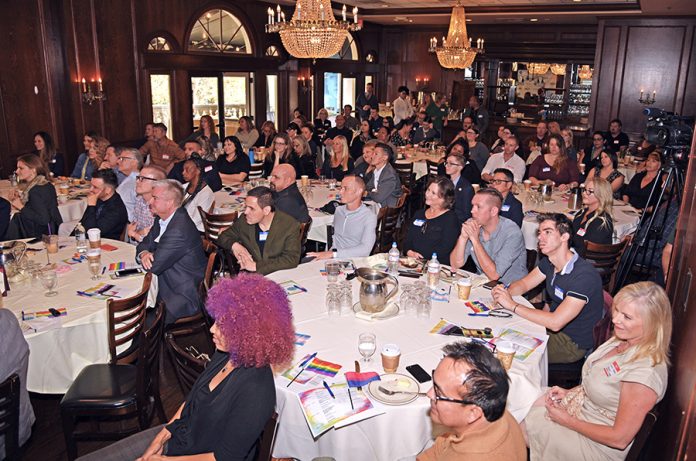 La Fuente Hollywood Treatment Center is hosting the second annual ETA Summit (Eat Think Act) at Maggiano’s at The Grove, on Friday, Oct 11. The forward-thinking summit focuses on topics and solutions specific to the LGBTQ experience in addiction treatment. Presenters and topics discussed at this year’s ETA Summit will align with what is being seen among LGBTQ people seeking treatment. The summit will culminate with breakout groups that will focus on building treatment plans and admissions best practices that advocate more directly and responsibly for LGBTQ people. 100% of the proceeds in the registration fees are going towards The Van Ness Recovery House. The event is sold out.

“ETA came about as a response to really working with a lot of other technicians, therapists, treatment centers, interventionists, who in many ways were aware that needs of LGBTQ people that were trying to access treatment were a lot of the times, very unique in relationship to their heterosexual counterparts,” Manny Rodriguez, La Fuente Hollywood Treatment Center Founder and CEO, told WEHO TIMES. “I started thinking what if we have a lunch and learn where how we educate on ideas that are very specific to the issues that come up in our population and come up with solutions to those issues and things that we’re learning and things that are changing and things that we didn’t know. And that’s how it came about.”

ETA happens around food. Attendees are invited to eat and think about what what is being discussed in between meals and the goal is to get them to act upon what has been processed.

“We’re sharing and we hope that what we’re sharing, people are able to act on it pretty quickly in relationship to their work and the people that they serve,” said Rodriguez. “What we’re really going to do this year is, we’re going to really have attendees, work on creating a treatment that would be very specific to a specific type of client after all the presenters are done. Last year we did these presentations that were very informative and educational. This year is really going to get the people that come an opportunity within a group and they will come up with a treatment plan that will address the issues that someone has when they come into treatment. One thing to remember is that the people that come to ETA aren’t LGBTQ. I would say 80 to 90%, I would say are cisgender and heterosexual men and women. We talk to each other all day and we understand what problems and the solutions are, but there are a lot of people who are out there that come across us and want to help us, but they don’t really understand what a lot of the problems are, or to address them.”

He says the speakers are the crème de la crème in their field. Speakers for this year’s ETA Summit include:

According to Rodriguez the event event is primarily paid for by the sponsors, but everyone pays a registration fee to attend ETA. Every penny made from registration will go to the Van Ness Recovery House.

Why the Van Ness Recovery House?

“We sold out. We’re excited about that. We limited to 100 people and every seat was sold.”