The neon dog was connected to Collar & Leash which is scheduled for demolition. On January 21, 2020, the City Council accepted a gift of the neon dog sign from Joseph Chan and Charles Chan Massey. The neon sign was sited at the city and it was restored and conserved very much like the Rocky & Bullwinkle sculpture that is now on display on Sunset Boulevard.

“We think there’s no better place in the city than locating it next to one of our most beloved dog parks at Hart Park,” said Eheman. “We thought the location along Sunset Boulevard would be just a really nice addition to the pedestrian culture of Sunset Boulevard; Sunset Strip.”

She added that the neon dog project would also highlight the entrance to Hart Park, which is often missed. 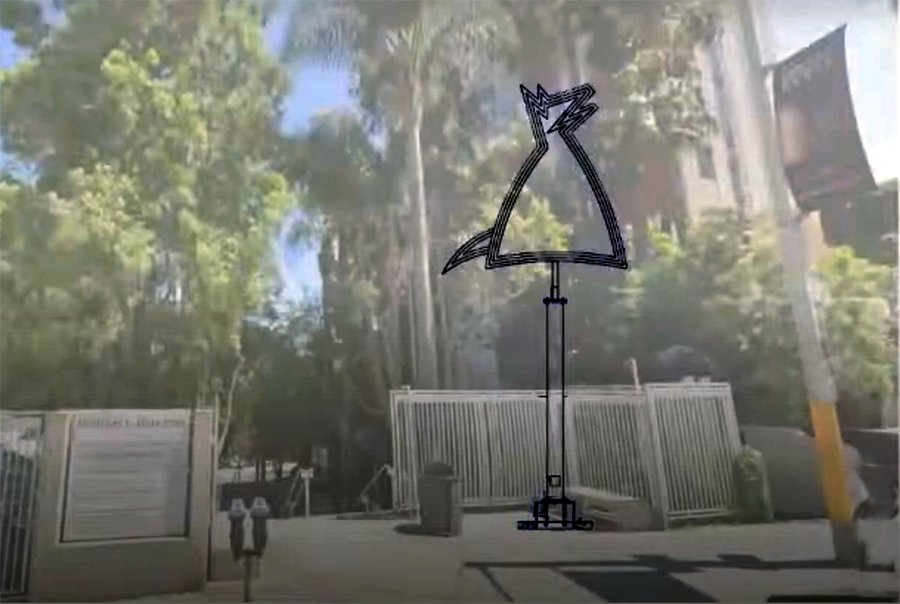 The Neon Dog is a reconditioned, electrically rotating neon sign in the shape of a dog (10’6” high, 10’9” at its widest), and part of the City of West Hollywood’s Urban Art collection. The proposed project includes the installation of the Neon Dog atop a 12’-tall vertical support pole (with corresponding structural foundation and electrical connections) at the Park’s Sunset Boulevard entrance located between North Kings Road and North Sweetzer Avenue. The proposed art installation would located at a nook to the right of the park entrance. The sign will stand on long pole above arms reach, sitting at about 12 feet above ground. A trashcan and bench would be removed from the area. 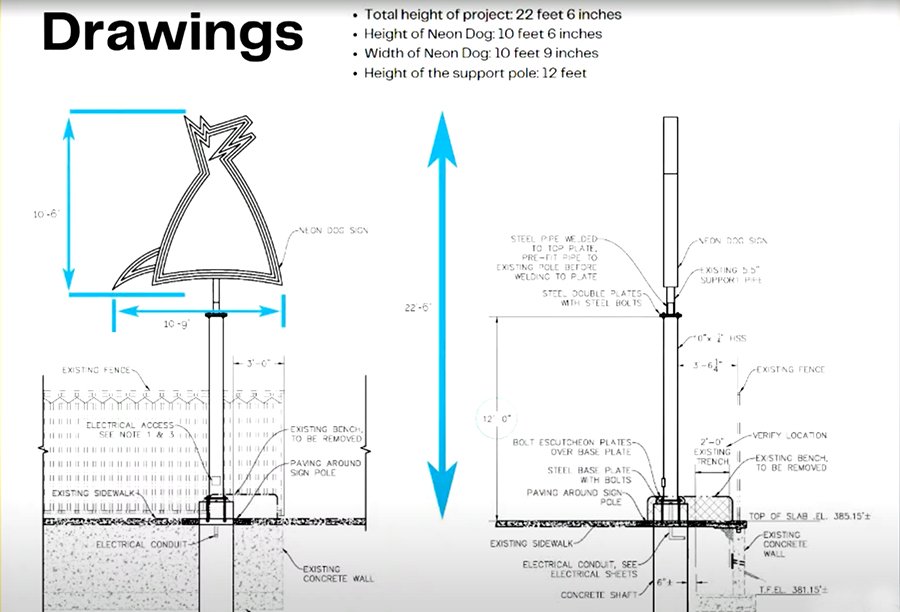 This is the second of three reviews that will go before the city of Los Angeles to obtain the full permission to install the project. WeHo Arts has already received a preliminary approval from the Los Angeles Department of Park and Recreations Facility Repair and Maintenance Commission Task Force in July. It will return before the Parks and Recs Commission for a final review before the city proceeds with the installation.

The Cultural Affairs Commission had no questions. The comments were in favor of the Neon Dog project. “There is nothing not to love about an electronic dog,” said Commissioner Robert Vinson.

“I think it’s really fun,” said President Elissa Scrafano. “Everyone is going to see it from both sides of Sunset. It makes us think of a smile.”

The motion to approve the item passed unanimously.

The City of West Hollywood is hoping to get it installed before the end of this year.

The famous Collar & Leash neon dog sign was originally located at 8555, Santa Monica Boulevard. A crane removed it from the Collar & Leash parking lot on Tuesday, June 24, 2020. It was deinstalled and carefully placed in the back of a truck and was taken to Ontario California for much needed repairs in preparation to become a permanent art installation in West Hollywood.

William S. Hart Park & Off Leash Dog Park is a fenced-in park between Sunset Boulevard and De Longpre that allows dogs to play off-leash in a tree-lined space with mulch on the ground, located at 8341 De Longpre Ave, West Hollywood.

To view the Cultural Affairs Commission meeting. click below. The Neon Dog Project item is discussed at 1:02.

This is so great to read. I had wondered what was going to happen with the neon Dog and I am happy to see that it is going to William Hart Park.

100k is too much. Use that to bus the homeless to their choice of Florida or TexAss